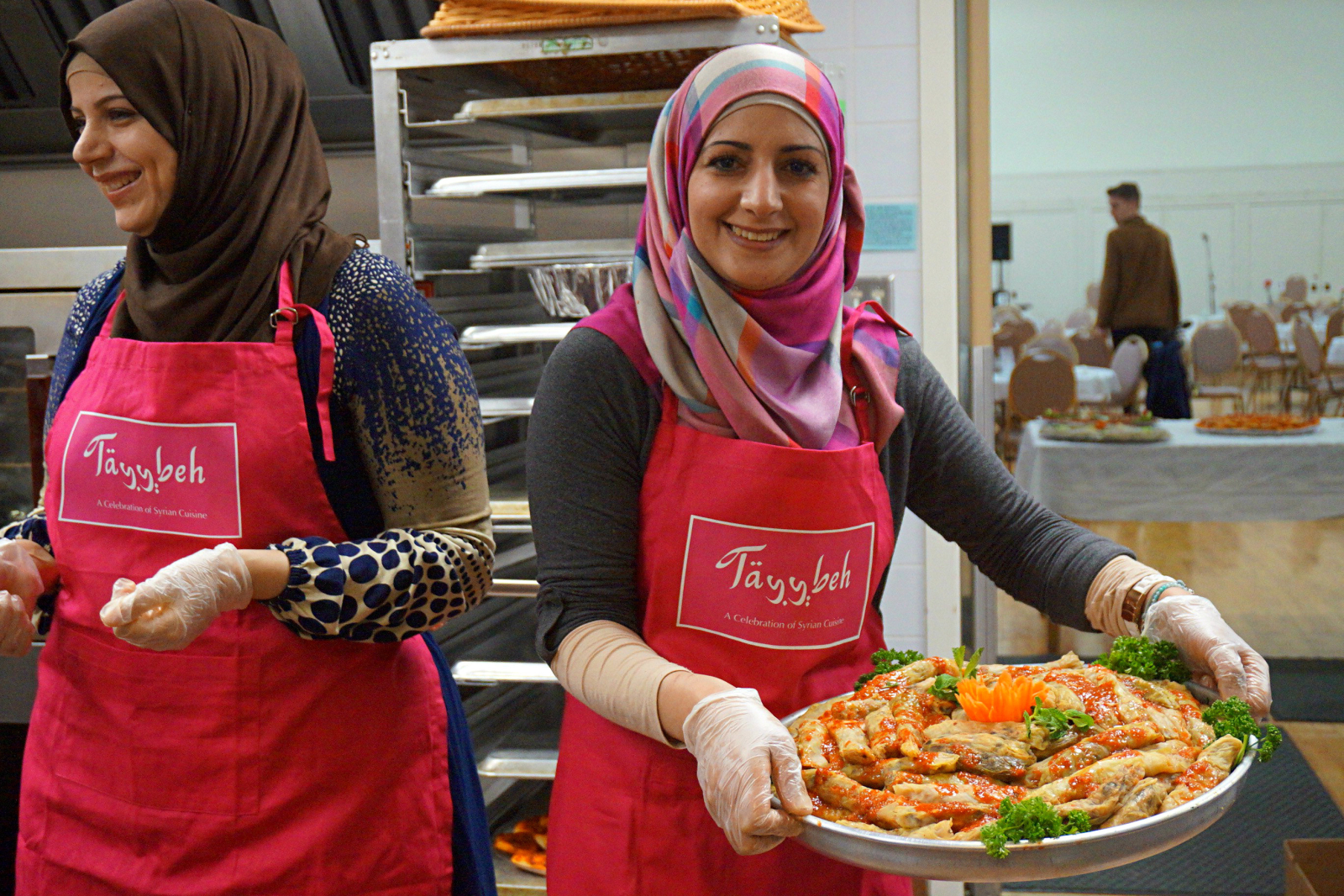 Syrian refugees Maha Almarabaani (left) and Leena Alhamad show off one of their dishes before serving a public dinner on Sat. Feb. 25, 2017 in Vancouver, B.C. Photo by Jenny Uechi
Previous story
Next story

On a cold Saturday evening, organ music billows softly through the walls of St. Mary's Kerrisdale Church, a gorgeous place of worship in a quiet residential corner of Vancouver, B.C.

Further inside the church's nearby event hall however, and a very different kind of music is playing: pots and pans, clattering dishes, conversation and laughter. In the kitchen, women in head scarves are busy peeling, slicing, and putting final touches on a massive dinner they’ve been planning for weeks.

All are Syrian refugees, recent arrivals to Canada, getting ready to greet 100 guests who have bought tickets for Tayybeh: A Celebration of Syrian Cuisine. It's a "pop-up" dinner event to raise money for Syrian refugees and showcase the Middle Eastern country's culinary culture, which is known throughout the region for its hearty flavours.

Each of the six bustling cooks — Hasne Shekh from Idlib and her daughter Heba Najib, Leena Alhamad from Homs, Rawaa Mahouk from Aleppo, Raghda Hassan from Latakia, Maha Almarabaani from Damascus — are making dishes that reflect their regional specialties. Nothing is ready to serve just yet, but the smell alone is to die for.

A sold out show, every time

"This is our third event," says Mahouk, holding up three fingers. She's taking a quick break from the kitchen after several hours of preparation.

Their first dinner took place in October last year, and through Facebook advertising and word-of-mouth, the catered events have sold out every single time. This particular dinner, marking the end of winter, is their biggest one to date and sold out in a record 90 minutes.

Asked which dish from Aleppo is her favourite, Mahouk pauses for several seconds. She adds up menu items in her head before responding: "Everything is good. Mahshi (stuffed vegetables), kibbeh (beef and bulgur wheat meatballs), all of it is good."

Further down the cooking line, Heba Najib, a young woman wearing glasses, explains in hesitant English that she and her mother are preparing Syrian-style hummus. She gestures with gloved hands to show that the ingredients are mixed together and eaten with bread.

“It's made with chickpeas, lemon juice, yogurt, tahini…” she says, proudly showing off a pot of the Middle Eastern spread.

Some men rush in and out of the kitchen as well, to help their family members prepare the food. Firas Najib, Heba's older brother, proudly says he's been cooking for years and is here to support his sister. He just got off a week of work in Delta, B.C., and quickly ditches his formal attire in favour of the signature, bright pink Tayybeh t-shirt.

The Tayybeh dinner events are the brainchild of Nihal Elwan, a Vancouver-based consultant who specializes in researching and developing economic and social inclusion programs, with a focus on gender and youth. Born in Cairo, Egypt, and educated at the London School of Economics, Elwan is fluent in English, French, and Arabic. She has worked in the Middle East for more than a decade for organizations like UNICEF Oman, the United Nations Development Programme, and Banyan Global.

On the job, she often dealt with women-specific issues like domestic violence and child marriage, and today, is very sensitive to the challenges facing women refugees arriving from Syria to Canada.

"Many women who come here face many challenges getting employment or making friends because they don't know the language here," says Elwan at the church. "They've left all their social networks behind, so it's very easy for them to become isolated."

Elwan saw that even though the Syrian women lacked English fluency, there was a way for them to connect with the local community: by cooking up a storm and sharing their profound love of food. Many Syrian refugees she has encountered in Vancouver have been taught to cook from an early age by their mothers and sisters, she explains, and take great pride in their family recipes.

"All of these women are excellent cooks," she tells National Observer. "Through these events, they build their confidence, and get to socialize and make new friends."

With a $500 grant from the Vancouver Foundation, Elwan organized the first event last October at Tamam, a Palestinian restaurant in Vancouver. The event drew a whopping 70 guests, and as a result of its success, the group launched follow-up dinners in January and February this year.

Already, Tayybeh's Syrian cooking is becoming widely recognized in B.C.'s Lower Mainland; the cooks have been invited to cater at special events for organizations such as Immigrant Services Society of BC and the Vancouver Rape Relief and Women's Shelter.

In March, they will be cooking for the North Shore Women's Centre in North Vancouver on International Women's Day, and later this month, for the City of Vancouver, Elwan said. It's a big step forward for the women, who generate a small income for their families through cooking at these events.

The group is called 'Tayybeh,' Elwan explains, because the word means 'kind' in the feminine form in Arabic. It also means "delicious" in the Syrian Arabic dialect. Assisted by her close-knit group of friends, Elwan and her fellow volunteers have built up Tayybeh to be a space for Syrian cooking enthusiasts to use their skills to build work experience and bond with other refugees and locals.

"We’re basically trying to be a revolving door for women, or men — we're often getting a lot of help from brothers, sons and husbands — to develop their skills in Canada," she says. Her original team of four cooks has grown to six, each with their own repertoire of specialized dishes.

"There’s a lot of regionalism and they literally come from different cities. They battle over whose recipe is the best," she laughs.

The menu this evening includes kibbeh mabroumeh, baked fine ground beef with bulgur, pistachios and spices from Aleppo, and mahshi, slow-cooked zucchinis and aubergines stuffed with rice and ground meat, based on a recipe from Homs, as well as a variety of salads and mixed pies.

The faith community in Vancouver has been extraordinarily supportive of Tayybeh, she says, with the progressive Anglican St. Mary's Kerrisdale Church lending not only its space but also onsite support through John Taylor, a church official of more than two decades. When the guests start to stream in, he's in and out of the dining hall and kitchen, making sure everyone feels welcome.

Many people have come to support the Syrian refugees, while others were keen to try new types of dishes. 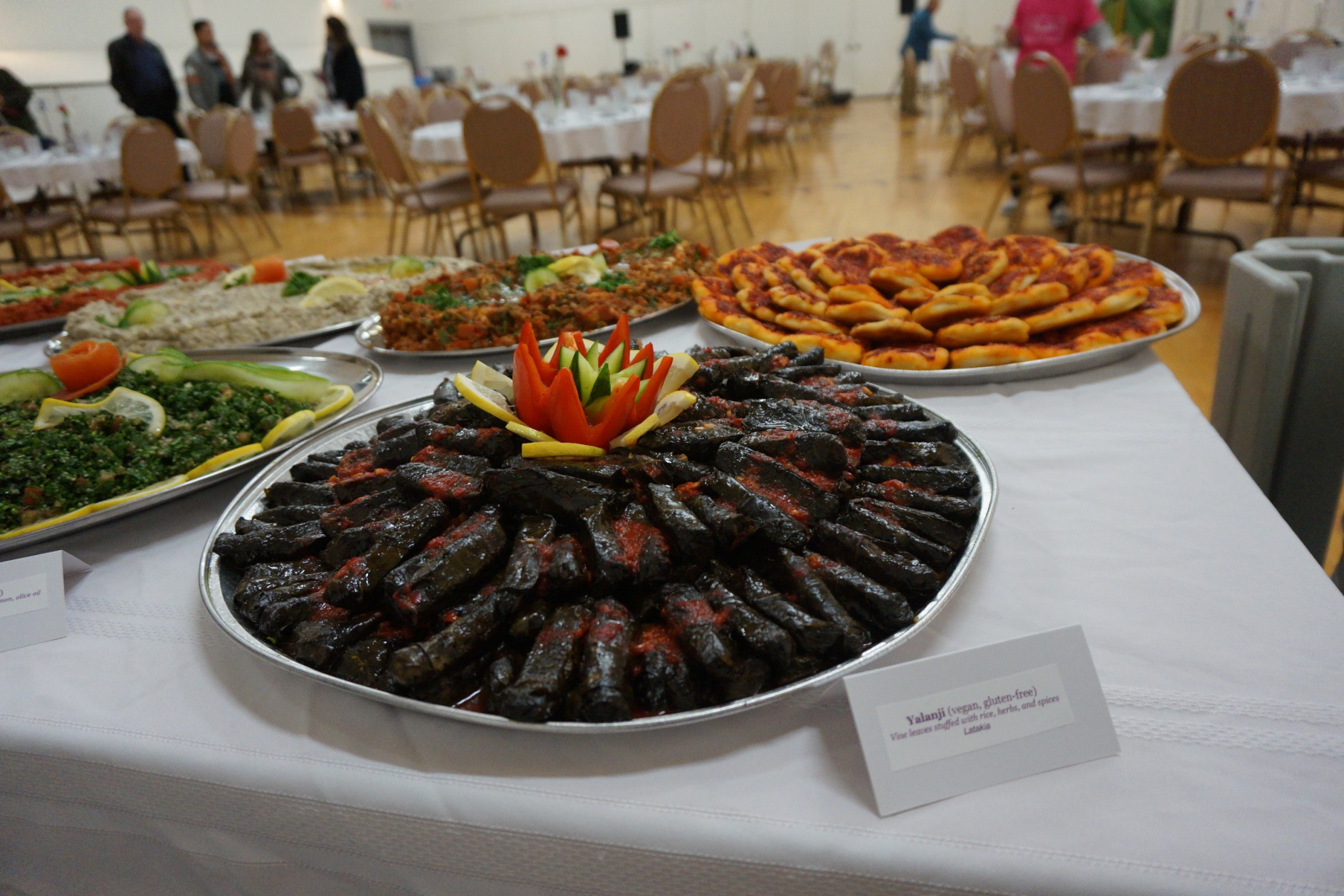 A plate of yalangi (vine leaves stuffed with rice, herbs and spices) is served up at the Anglican St. Mary's Kerrisdale Church in Vancouver, B.C. on Sat. Feb. 25, 2017. Yalangi is from Latakia, the coastal city in Syria where Raghda Hassan lived before coming to Canada. Photo by Jenny Uechi

While the female cooks are the stars of the show, their husbands, sons and brothers quietly support them behind the scenes. They wash dishes while the women take to the event stage, and weave through tables refilling jugs of water.

One by one, Elwan introduces the chefs to the crowd. Each takes the microphone briefly to share their thoughts with the people who have gathered to taste their cooking.

“Thank you so much, everybody, for coming,” says Leena Alhamad.

But given that the event's purpose is to raise money for Syrian refugees, some guests wonder if the ticket price is too low. The concern came up at the first Tayybeh dinner, where tickets were $25 for a multi-course meal, according to Elwan. Prices have since been raised to $43, but some Canadian guests still worry that the fee isn't reflective of the amount of time the women spend preparing the food for each event.

As an observer, however, I can't help but feel that the dinners are about more than cost-effectiveness. When one of the cooks, Rawaa Mahouk, starts to dance spontaneously with dinner guests to the traditional oud (Arabic lute) and tabla (drum) music, the joy that fills the room seems hard to quantify in any particular dollar amount.

In the back room, where families have stowed away their purses and jackets, Leena's daughter — a small girl gripping a fuzzy pink cat-shaped purse — asks how many guests are at the tables. Upon hearing that there are around 90 guests still seated, she grabs a stack of cards, kneels on the carpet floor and begins writing messages in English to hand out to the guests. She's too young to help her mother cook for the event, but wants to do something to contribute.

"Tayyba is the best," she scrawls on the card. On an envelope, her friend writes: "Open OK." 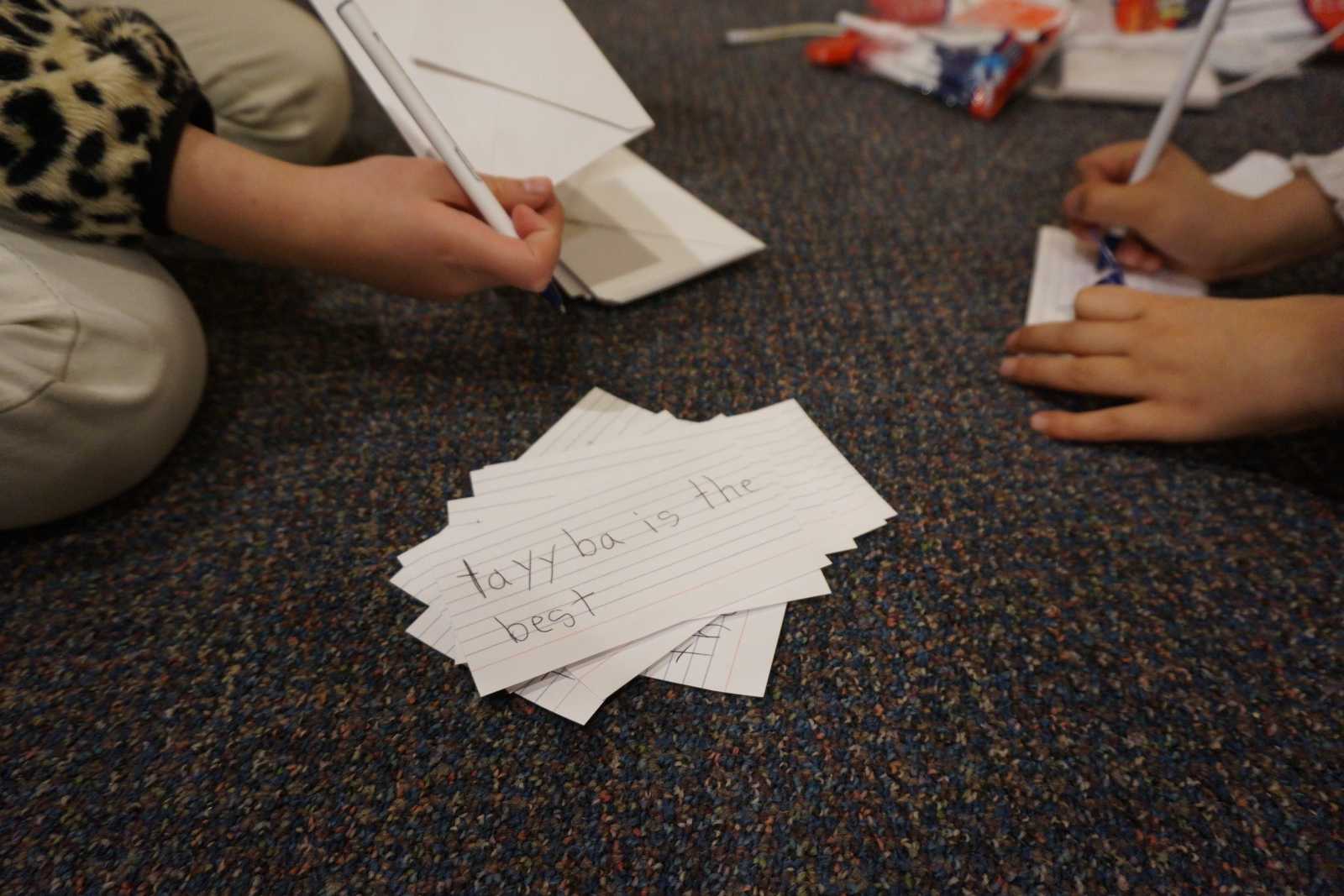 Children writing messages on cards for the guests gathered at the Tayybeh dinner. Photo by Jenny Uechi

Outside the back room, the older children shyly greet the guests and take photos of their family members displaying the dishes they're prepared for the event. Even those who appeared withdrawn at the beginning of the event gradually open up as they are asked questions and congratulated on their new lives in Canada.

"One thing we’re asked (often) is what Tayybeh is," says Elwan, gesturing to the room full of guests, refugees, and supporters. "We’re not a charity, we’re not a nonprofit, we’re not a company... We don't know yet, and aren't in a hurry to find out. But for now, we’re this.

"We’re a group of people who have come together to support these women. And all of you — thank you for coming out tonight."

More photos from the Tayybeh gallery

This is a wonderful, feel

This is a wonderful, feel good article and much appreciated by me and my wife having a coffee here in small town in Mexico that we spend 5 months every year. Thank you for reporting on the positive side.
Pj

You're welcome, Patrick! Thanks so much for taking time to read our story and to comment; we really appreciate it. Have a good day.
JU