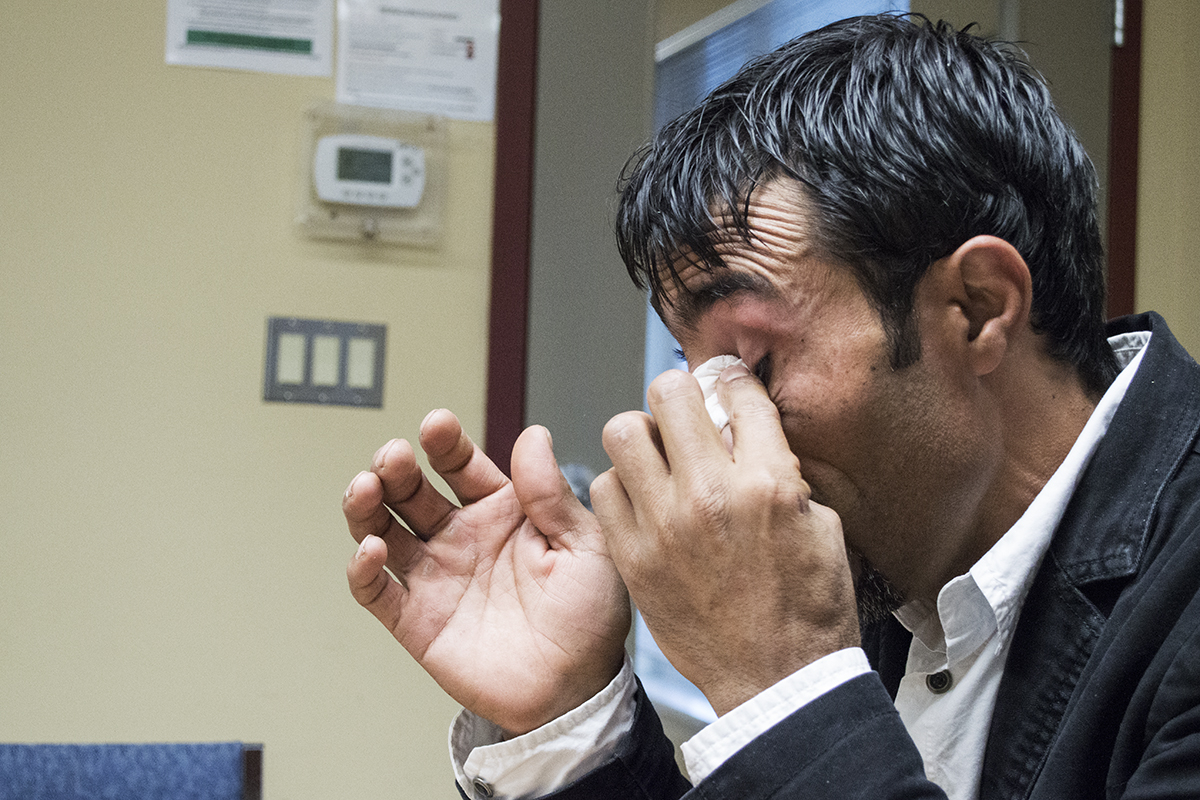 Ali Barsan buried his head in his hands, and let out a soft sob. An interpreter slid him a box of tissue paper, and he thanked her as he dabbed away hot tears falling down his cheeks.

"Everybody seems to be laughing and having fun here, but I'm still struggling with some things in Canada," he said quietly. "Two of my brothers were captured by the Assad regime. I haven't been able to talk to them in four years."

I looked down, at a loss for words, as a settlement worker comforted him. This was the second time I'd met Ali, and the pain in his voice was as raw as it was the first time I'd interviewed him in June, when he broke down crying at the mention of his family caught in war.

Ali is a portrait of resilience, surviving war, supporting his wife through cancer treatments in Syria, and relocating to a new life and job in Langley, British Columbia. Yet whenever his mind drifts to Syria, grief overwhelms him. Aleppo used to be a UNESCO heritage site, he said, for its sublime souqs and historic churches and mosques. Today, it's described as a "tomb" for international law and human decency by international media.

Video from The New York Times

Aleppo has been at the centre of a violent civil war over the last four years. On Tuesday, the war reached a violent end, with Russia's ambassador to the UN declaring on Tuesday that the government forces have defeated the rebels.

Settlement workers at the Langley Community Services Society applauded Ali as a role model for the 35,000 Syrian refugees who arrived in Canada since November 2015. Ali and his family were among 2,100 government-assisted Syrian refugees to settle in B.C. Despite only having a sixth-grade education, he found work in construction within weeks of arriving. He once used to supervise up to 200 people working on buildings, and is no stranger to hard work. His children are doing well in school, and his now recovered wife had recently catered an event for a restaurant, with professional help.

But Aleppo's tragedies cast a shadow over his new life and achievements in Canada.

Since moving to Canada, Ali has been racked by fear for his family members who remain trapped in the besieged city.

A recent New York Times article called Aleppo's current situation a "complete meltdown of humanity," in reference to comments from U.N. humanitarian spokesman Jens Laerke on the intensifying war. Eyewitnesses described civilians being gunned down in the streets and injured victims left with no functioning hospitals.

Ali told National Observer this week through a translator, Iraqi-Canadian journalist Ahmed Najdat, that he was receiving distressing voice messages on his phone from his family about the Aleppo siege.

"I communicate with the family whenever one of them leaves Aleppo's countryside, where they are staying." According to Ali, IS has cut off internet in the 70km range in his family's neighbourhood, so they pre-record messages on their phone that get sent to Ali whenever they can manage to get to a location with wireless coverage.

Asked if anybody from his family has managed to escape Aleppo, Ali said there was simply no way for them to get out.

"Everyone who tried escaping was shot dead at the gates," he said. "Corpses fill the streets and nobody can collect them. Children scream under the rubble, and nobody can help them. Firefighters and aid workers can't do anything about it because of the intense constant bombings. It cannot be described with words. Aleppo is being wiped out...and the world is silent about it."

Local activists have posted videos in the last 24 hours on social media, begging for humanitarian assistance. Some local journalists have posted 'goodbye videos', in anticipation that it may be their final message to the world before they are killed. Some journalists condemn the framing of reporting on Aleppo as being driven by anti-Assad bias, but nearly all the Syrian refugees I spoke to in Metro Vancouver mostly said they didn't support either side, as both have caused suffering for civilians.

A missile just fell on the roof of my building
Now the people who were waiting the buses have to run back for their lives again find shelter pic.twitter.com/WGGfc1BEdX

Derailed hopes for the future

He's deeply concerned for his sister, Khadija, and his parents. Then there are his younger brothers Hasan and Yasir, who were imprisoned while trying to flee the war. It's doubly painful for Ali, since he worked long hours during his youth to help pay for their way through school. Even though he wasn't allowed to study beyond primary school, Ali worked to ensure his brothers made it through university.

A smile appears on his lips as Ali recalls that one of his college-educated brothers wasn't very committed to school at first.

"One of my brothers wasn't that good a student. He always wanted to skip class and play marbles with his friends," he remembered nostalgically. As their older brother, Ali pushed them to graduate, because he didn't want them to go through the same hardships he did, entering the work force at age 12. Even when one of his siblings wanted to drop out, Ali said he prodded and pushed until he re-enrolled and finished his high school diploma.

Those days are a distant memory for Ali, now, however, since the war dashed hopes that they could use their education to build a brighter future. 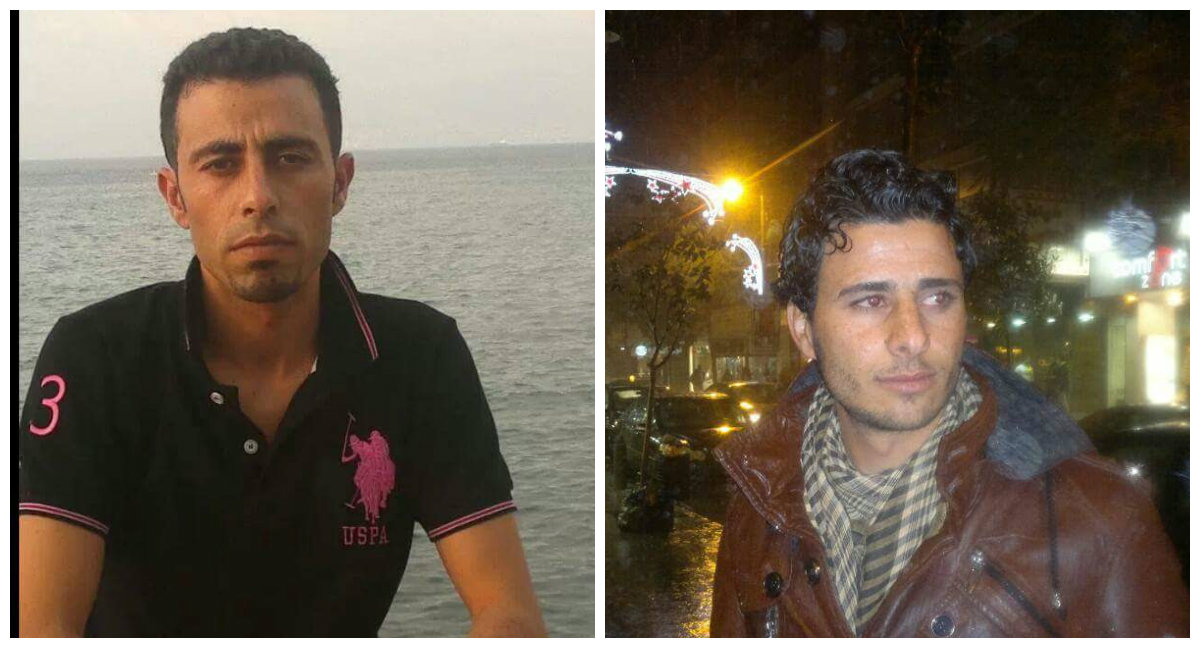 Photo of Hassan and Yasir Barsan provided by Ali Barsan. Ali has not heard from them since they captured by Assad's forces.

"How can we ever be happy in Canada?"

The flood of bad news coming from Aleppo and other parts of Syria has affected refugees like Ali, who have come to Canada to start their lives over.

"My wife is always crying because her sister is missing there, and on Monday, she just received the news of the death of her brother at the hands of the government army. When we sit around the table, we remember the family left behind, and we just leave the table," he said.

"We watch children and the elderly die in the thousands and we can't do anything about it," he said. "I am watching my memories and our history being crushed. I can't even express myself. How can we ever be happy in Canada when this is happening to our families back there?"

Ali said his sons continue to ask him what happened to their uncles. Every few nights, he said, one of his children will come to his room crying after waking from a disturbing dream about Syria.

At a thank you event organized by Syrian refugees in June, Ali had brought a folder of photographs showing children's corpses, all victims of the war in Syria. His 10-year-old son, Hazim, silently took one of the photos in his hand and held it up for the camera.

Right now, Ali's biggest hope is to bring his surviving family members to safety in Canada. Ali has already written his MP, asking for his youngest brothers, Saeed and Ahmad, to be able to come to Canada. Ahmad fled the IS-controlled countryside of Aleppo, out of fears that he may be forced to join them, and walked for 15 days straight to reach Turkey. And at just 22 years old, Saeed has his whole life ahead of him, and hopes to continue his university studies in a safe country.

"I'll take care of them and make sure they continue their schooling," Ali said. He emphasizes the importance of getting formal education, possibly because he didn't have that option as a child.

"I want them to continue school and become respected in society," he said.

But due to Saeed's status as a single young man with no children, he has slimmer odds of being selected to come to Canada, as the federal government prioritizes vulnerable refugees such as women at risk, children, and people with disabilities.

According to Immigration, Refugees and Citizenship Canada minister John McCalllum, planned admissions for all resettled refugees in 2017 are double those established for 2015 and in preceding years. But it's unclear if there will be any priority given to victims of the Syrian crisis.

"I know that our Foreign Affairs minister and our Prime Minister have expressed great concern, even despair at the evolution of this situation.... in terms of my department, we’re going steady on the refugee program," Minister McCallum told reporters at a news conference on Wednesday. "We obviously expressed our deep condolences on the Syrian situation today, but all the more reason for us to forge ahead as quickly as we can with this initiative and with our efforts more generally to receive refugees.”

"The people besieged in Aleppo are not only my family, but many other Syrian families. Shouldn't we feel for them as human beings? They are calling out for help," Barsan said. "God have mercy on them."

Canadians wishing to help civilians in Aleppo can contact Lifeline Syria to help sponsor Syrian refugees to Canada. Lifeline Syria has around 2,000 refugees backlogged and waiting for sponsor groups to be formed, according to the organization's community engagement manager, Seher Shafiq. It costs approximately $27,000 to resettle a family of four, and $12,600 to resettle an individual refugee in Canada. Other information on how to privately sponsor a refugee is available here. People can also contribute to refugees resettled in B.C. here.