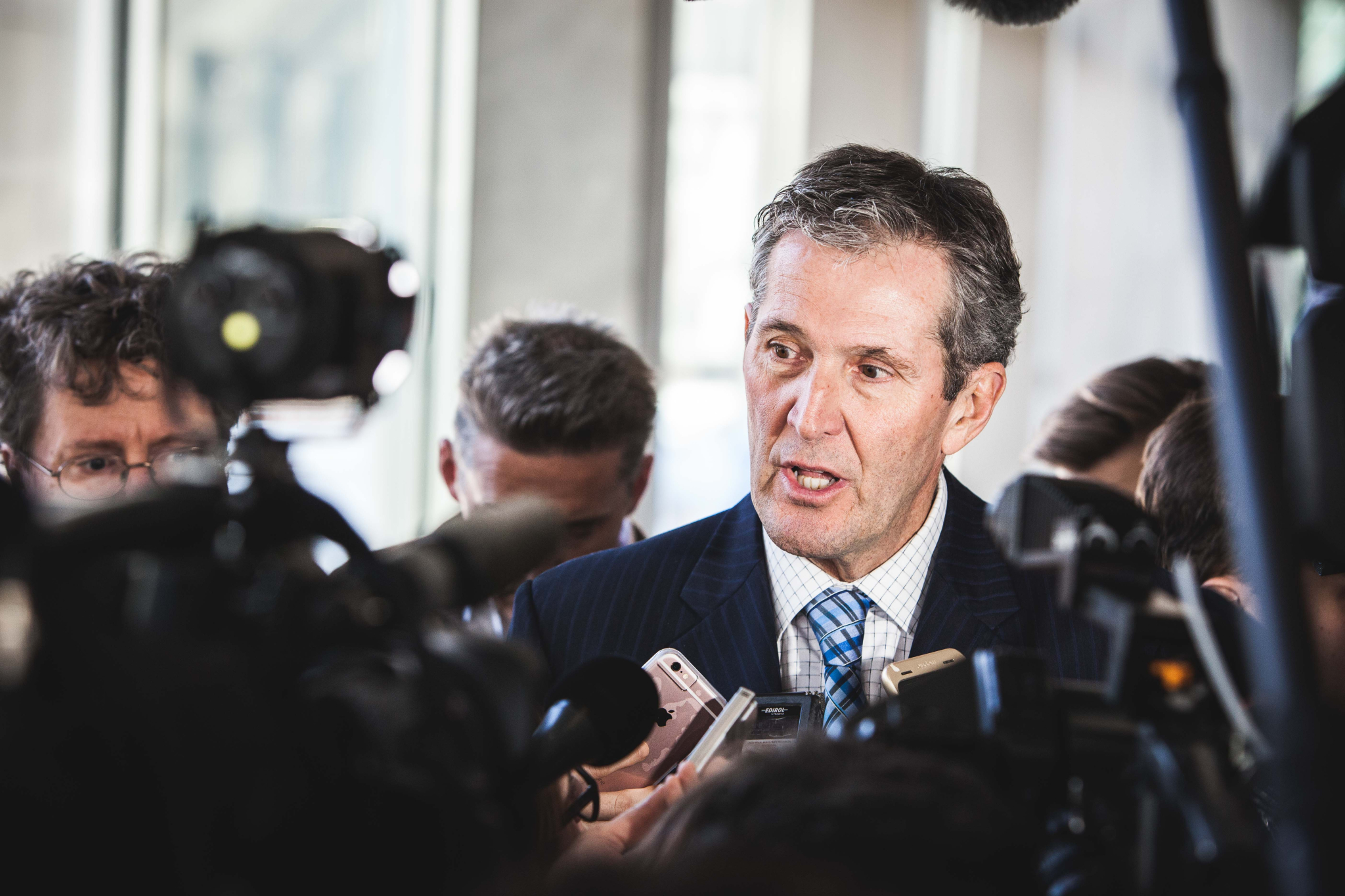 After all, the province’s emissions are a mere blip on the national radar. In 2014, Manitoba only emitted 21.5 megatonnes (Mt) of carbon dioxide equivalent, less than three per cent of the country’s total. By contrast, that same year Alberta emitted 273.8 Mt and Ontario contributed 170.2 Mt.

And despite not signing the Pan-Canada Framework in December, the provincial government is in the process of crafting a “Made-in-Manitoba Climate Action Plan” to fulfill national climate obligations.

"Manitoba is Canada's greenest province and we have been, and remain, consistent in our commitment to addressing climate change," Premier Brian Pallister said in December following a national meeting on climate change hosted in Ottawa by Prime Minister Justin Trudeau.

In a recent interview, Minister of Sustainable Development Cathy Cox said: “We do plan to have something within the next little while. I can’t say for sure. It’s a work in progress.”

“We feel that with these different plans and ideas that we do get from Manitobans, that we will be able to reach our goal and target,” she told National Observer.

But that doesn’t mean that all is quiet on the climate front.

“We’re not really on a reduction trajectory,” said Curt Hull, project manager at the Manitoba Eco-Network’s Climate Change Connection. “It depends on how you interpret it, but optimistically you could say we’ve plateaued. But by the same token, you could also interpret it to say we’re still increasing.”

Manitoba NDP environment critic Rob Altemeyer noted that the rate of increase in Manitoba’s annual emissions dropped by 90 per cent between 2000 and 2014. Despite that fact, the province completely blew past its legislated Kyoto Accord targets. Instead of reducing heat-trapping pollution by six per cent below 1990 levels as pledged, the province now sits 15 per cent above that benchmark.

That means that Manitoba was one of only three provinces which increased its emissions between 1990 and 2014. Oil and gas-heavy Alberta and Saskatchewan are the other two. In the same span, Ontario’s emissions dropped by 19 per cent.

Manitoba emissions predicted to grow more than any other province

In fact, in a maintained “low oil price environment” of $40 per barrel of oil, Manitoba’s emissions will spike far more than any other province: the Pembina Institute has calculated a potential 63 per cent increase in Manitoba’s emissions between 2005 and 2030, compared to the national average of a 10 per cent decrease.

It’s an especially troubling reality given the province’s commitment to cut emissions by 33 per cent below the 2005 levels by 2030. That means it will have to cut a full 6.8 Mt, around the same size as emissions from Manitoba’s entire agriculture sector.

Almost all the province’s electricity comes from hydroelectric dams, putting it in the rare position of having an effectively decarbonized power grid.

In addition, it doesn’t have many sizable industrial facilities. Only five of its “large final emitters” produce more than 0.1 Mt of carbon dioxide equivalent per year, with the largest being the Koch Fertilizer Plant in Brandon, emitting 0.67 Mt in 2014).

That means there are only three major sources of emissions in Manitoba: transportation (39 per cent of the total), agriculture (29 per cent) and stationary combustion (20 per cent).

And that’s where the upcoming provincial climate plan is supposed to come in.

Province only one of two provinces outside Pan-Canadian Framework

For context, Manitoba is currently only one of two provinces (the other is Saskatchewan) that hasn’t signed the Pan-Canadian Framework, a landmark climate change agreement struck in December 2016 mandating carbon pricing, methane reductions, net-zero building codes, clean fuel standards and the phase out of coal-fired power plants.

At the time, Manitoba Premier Pallister cited unresolved negotiations over health care transfers for his motivation in holding out.

"Our government continues to develop our Made in Manitoba plan, which will reflect our specific environmental circumstances and meet our province's economic needs. We will continue to punch above our weight on addressing climate change."

Erin Flanagan, director of the Pembina Institute's federal policy program, said she didn’t hear any active opposition to climate policy from Manitoba at the time.

“I’m optimistic that when those other policies questions are resolved, Manitoba will be an active contributor,” she said. “I expect that they’re working quite diligently at the moment to determine what that will look like for them in terms of adherence to the national carbon pricing benchmark and other policies they’ll need to bring in to reduce their emissions.”

Manitoba is indeed doing that.

Unlike Saskatchewan — whose premier Brad Wall is now threatening to sue the federal government over mandated carbon pricing — Manitoba is developing its own climate plan under the guidance of David McLaughlin, a climate policy heavyweight who served as manager for the Progressive Conservatives during their successful 2016 campaign.

McLaughlin, previously a chief of staff to former prime minister Brian Mulroney, has also been known in climate policy circles as one of the strongest conservative voices advocating for action to address climate change. In fact, he had occasionally sparked debates among Canadian conservatives as the former head of the National Round Table on the Environment and the Economy, a federally-funded think tank. The former Harper government shut down this organization after it recommended putting a price on carbon pollution to address climate change.

McLaughlin’s contract with Manitoba is up at the end of March. That has led Hull of Climate Change Connection to speculate that the plan will be released before then.

One thing is certain: federal requirements will ensure that a central piece of the plan will be a price on carbon, hitting $50/tonne by 2022. In December 2015, the previous New Democratic Party government committed to implementing a cap-and-trade system under the Western Climate Initiative (a move that was publicly celebrated by Al Gore on Twitter).

However, the Manitoba PCs have indicated it plans to move forward with a carbon levy approach. Hull said it’s a move that makes sense for the province given the lack of emissions from “large final emitters,” making a levy far simpler to deploy.

A significant challenge related to carbon pricing is what to do with the agricultural sector, which makes up almost a third of the province’s emissions and will face serious challenges in future decades due to climate change.

Alberta’s recent and celebrated emissions plan included an exemption for marked fuel used for farming operations. Keystone Agricultural Producers, the largest farm policy organization in Manitoba, is now pushing for a similar exemption due to the tight margins associated with the sector, along with exclusion of emissions associated with fertilizer application, animal emissions and manure storage.

In Manitoba’s case, that could mean that innovative agricultural producers would receive offsets for changes in practices pertaining to fertilizing soil or feeding livestock.

“I think we’re seeing across Canada that it’s possible to bring in a carbon price and ensure that you are getting at your biggest sectors, but also protect their long-term viability, particularly when they’re long-term economic contributors,” said Flanagan from the Pembina Institute.

Transport emissions make up 39 per cent of Manitoba total

The other huge issue is transportation. James Magnus-Johnston, political economist at Canadian Mennonite University, noted that a carbon tax alone may not cause many key behaviour shifts and culture changes among Manitobans.

Some proposed solutions to that include setting biofuel mandates, investing in public transit and establishing zero-interest loans for electric vehicles; the latter was recently proposed by the NDP’s Altemeyer. Hull noted that other important factors which should be addressed are an increase in transport of goods by truck, as well as drivers buying vans, SUVs and half-ton trucks (a trend which spiked by 167 per cent between 1990 and 2013).

Much will likely be revealed in coming weeks.

For one, it’s certain that the provincial budget will be released on April 11, which Gass said he will be watching “very closely as a waypoint on where we are” regarding emissions reductions.

Minister of Sustainable Development Cox emphasized the consultation process of meeting with stakeholders and surveying the public via an online poll — which she says will be extended for another two weeks — will help sculpt the plan, but said “we haven’t developed anything yet.”

The survey covers a range of topics, including preferred price on carbon, where the revenue should be invested (including low-income rebates, subsidies for businesses and public transit) and how to incentivize low-carbon transportation (including electrifying public transit, creating more bike lanes and subsidizing electric vehicles).

Some options aren’t in the province’s jurisdiction, including “require stronger clean fuel standards” (which is subject to federal regulations). In addition, the question regarding a “Made-in-Manitoba carbon price” provides the options of keeping the levy at or below $30/tonne, which is contrary to the federal requirement of $50/tonne by 2022.

Cox said that over 4,000 people have filled out the survey so far.

“The conversations we’ve had with David McLaughlin have been very encouraging,” Hull concluded. “But we’re waiting to see what actually is put forward in terms of a plan and policy. Conversations when you’re in a room with somebody is different than what happens when they’re tabling legislation.”

Editor's note: This article was updated at 4:20 pm ET on Monday to correct that Alberta's annual greenhouse gas emissions in 2014 were 273.8 megatonnes of carbon dioxide equivalent pollution.