As Syrians adapt to life in Canada, researchers eye these key factors 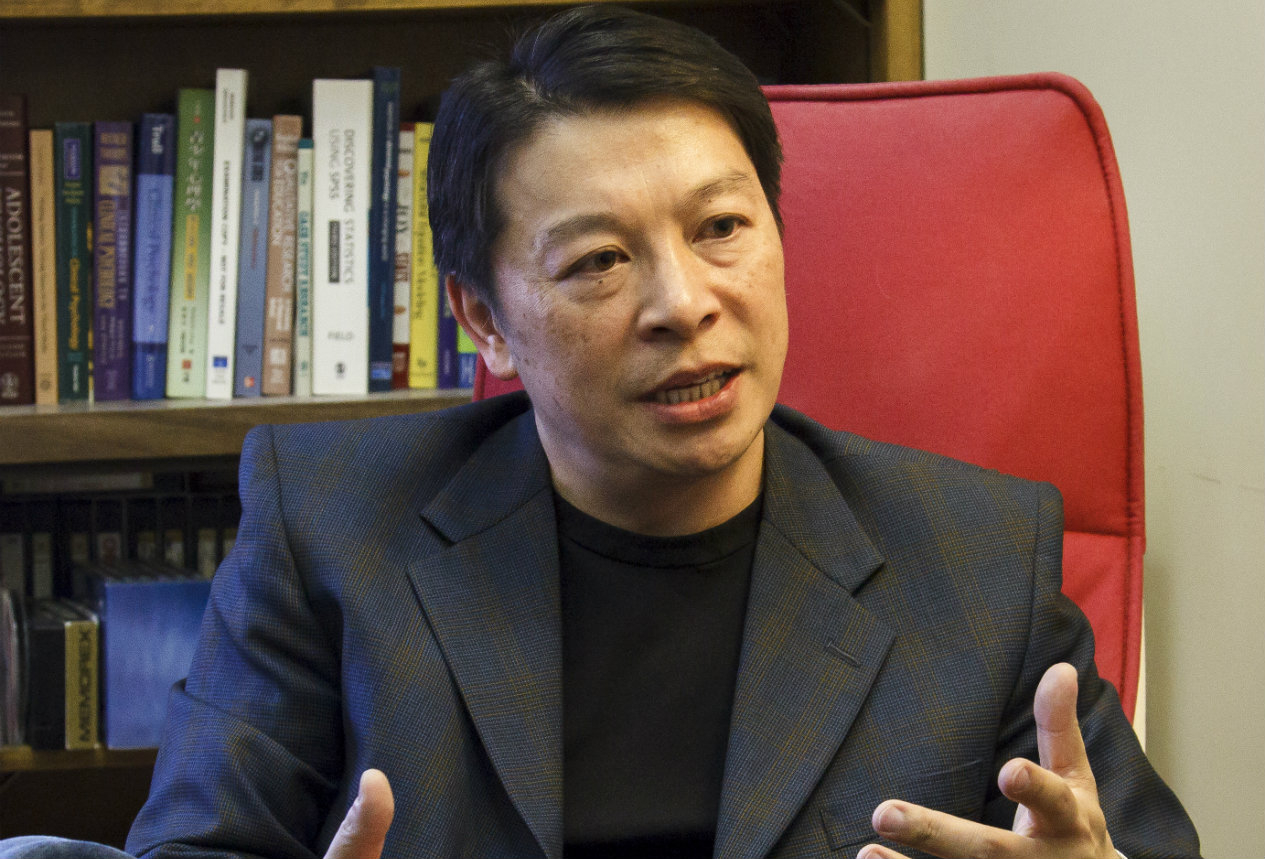 Psychology professor Ben Kuo at his office in the University of Windsor, Ontario. Kuo is part of a five year research project studying Syrian refugees' adaptation to life in Canada. Photo provided by Ben Kuo.
Previous story
Next story

Want to help Syrian refugees adapt successfully to life in Canada? Include them in social gatherings and don't treat their Canadian-born or raised children as eternal foreigners, advises an expert tracking refugees' integration into Canadian society.

Ben Kuo, a psychology professor at the University of Windsor, is about to embark on a five-year journey that will take him into the homes of new refugees to learn about their experiences adapting to life in Canada.

It’s part of a comprehensive study funded by the Canadian Institute of Health Research, instigated by Dr. Michaela Hynie at York University. Kuo and other researchers across the country are part of a large-scale study tracking the progress of 2,250 private and government-sponsored Syrian refugees. The research will be conducted in Windsor, Greater Toronto Area, Montreal, Kitchener, the Okanagan Valley and Greater Vancouver.

The study will help determine how Syrian refugees are adjusting to Canada by tracking their social connections, employment, linguistic adaptation and mental health. Kuo specializes in the mental health of diverse populations including refugees, immigrants and international students in Canada.

"Social inclusion leads to better integration in a new country," Kuo said in an interview with National Observer. "It's going to be important to track Syrian refugees' integration, after all the photo-ops with politicians have ended."

He and his Arabic-speaking research assistants will visit refugees' homes with a questionnaire, and walk through the same set of questions every year for five years with 135 participants. That is more than 10 per cent of the 1,000 Syrian refugees who have settled in the Windsor area.

Kuo says his most pressing concern about Syrian refugee integration is Canada's capacity to provide mental health support for refugees as they adjust to their new life while dealing with old traumas of war.

"I have a real concern about our long-term ability to address mental health for Syrian refugees and other groups," Kuo said.

According to aid group Save the Children, millions of children affected by war in Syria are suffering from "toxic stress" that has led to self-harm, suicide attempts and aggressive or withdrawn behaviour. After interviewing 450 children caught in Syria's conflict, the group warned in a report this month about the psychological toll on an entire generation of Syrian children. Even for refugees lucky enough to come to Canada, mental health remains a major concern. Families are often ripped apart during the relocation process, causing anxiety for those who make it to safety, while children who have been exposed to daily violence have difficulty adjusting to normal school life.

Many refugees come from cultures that stigmatize those who seek counselling, which makes them reluctant to seek help for depression or post-traumatic stress disorders related to war, according to refugee settlement workers in British Columbia.

"Everything could be going well for two to three years, then all of a sudden [mental trauma] starts popping back up," he said. "It takes education to communicate with refugees that these are normal responses."

Some charitable organizations in Canada support vulnerable refugee children who may suffer war trauma. United Way of Lower Mainland funds a New Westminster School District program in partnership with Cameray Child and Family Services to help teachers and other school staff recognize “flags” for trauma. Among such flags are social withdrawal, disengagement, or angry, hostile behaviour. The children are referred to counsellors and the Cameray Child and Family Services provides trauma treatment to families in the school district.

The organization is also funding a program run by Equitas (the International Centre for Human Rights Education) to build capacity and skills of organizations to welcome refugee children and build their self-confidence and communication skills.

Thankfully, Kuo said, refugee children are often resilient and often overcome difficulties faster than their parents. Young children, especially, adapt very fast to their surroundings, and can help the rest of their families cope with their new life in Canada, he said.

"What we may find happening is there may be conflict over intergenerational differences," he said. "Practicing traditional beliefs, cultural customs, even the language that they use at home. Those kinds of issues will come later on as the kids grow up and become more and more Canadian."

Kuo intends to focus a number of his questions on racism, because of its impact on how well newcomers can settle in Canada.

"Racism has a huge impact on emotional and psychological well-being of newcomers," he said.

"If you're consistently being discriminated against by institutions, interactions with people and from companies, schools, universtiies, and other places, then you're going to get the message you don't belong in Canada, even though we said that you do. It shows that what we do and what we say are two different things. That puts a toll on the person psychologically and also gives the sense of being 'kicked out.' The sense of being an outsider lingers."

In his clinical practice, Kuo said the effect of racism is far worse for children of newcomers who were born in Canada, or spent a large part their childhood growing up here.

"For example, if a mom and dad hear people say, 'Go back to where you came from,' that's awful. But if you were born here, and this is the place you know and you're told to go back to wherever, it's even more hurtful," he said.

Being treated as 'outsiders' by the mainstream society can alienate youth who don't have any other 'home' to fall back on, Kuo said, citing anecdotal observation.

"I don't have data on this but if you look at the uprisings by youth in France, a lot of young people feel disconnected from mainstream society. They were born in France, they're fluent in French, they feel they shouldn't be treated so differently from French people. When you're born and raised in a culture and still treated like you don't really belong, the distress can be even more strong."

Kuo's study is just one of many that track refugees' adaptation in Canada.

Last September, Immigration, Refugees and Citizenship Canada (IRCC) and the Social Sciences and Humanities Research Council (SSHRC) announced more than $600,000 in short-term grants for 25 research projects on issues that affect the successful resettlement of refugees. In addition, a Request For Proposal totaling $250,000 was posted to call for innovative interventions and alternative ways of supporting the settlement and integration of Syrian refugee families, women, men, youth and children.

"The experience of transitioning to life in Canada is different for every newcomer. Many of the recently resettled Syrian refugees are adjusting well and already giving back to the communities that have welcomed them."

She said preliminary findings from surveying Syrian refugees who arrived before March 1, 2016 show that "more than half of the privately sponsored refugee adults outside Quebec (53 per cent)" had found jobs. She said government-assisted refugees tend to have low language skills in English and French, and their employment levels are about 10 per cent. She noted many also come to Canada with years of experience in skilled trades and professions, and some get jobs quickly, even without completing English or French language training. In British Columbia, training programs have prepared dozens of Syrian refugees to fill jobs in manufacturing, a sector facing labour shortages.

It's too soon to tell how the Syrian newcomers will adapt to Canada, St. John said, because results from these research initiatives are not in yet.

"It's my responsibility to give back to Canada"

For some Syrian refugees, Canada already feels like much more of a home than the countries they initially fled to while escaping violence in Syria.

Syrian refugee Eslam Alabbas, a 21-year-old university student, recalled that life was difficult for her in Jordan before she moved to Canada.

"I'd tried to start over by studying pharmacy in Jordan. I worked hard, but life was so hard...because of the resentment (from the local population)," she said, during a speech in Vancouver last December.

Jordan, like neighbouring Lebanon, has taken over half a million Syrian refugees, and the strain on resources has created tensions between the refugee and local populations, partially because the country has already accepted a large influx of people from Iraq, Egypt and Palestine.

Alabbas told National Observer she so far hasn't experienced any prejudice from Canadians despite wearing a hijab (Muslim headscarf), and that she and her family feel accepted and at home in Burnaby.

"I'm very grateful to Canada and to Canadians because they opened their hearts and minds for us....I'm very proud to be a Syrian-Canadian, belonging to two beautiful countries. This is why it's my responsibility to give back to Canada, to better shape Canada through civic engagement and social integration. I cannot thank you enough. Thanks, thanks, from the bottom of my heart," she said.

Syrian refugee Eslam Alabbas speaking at Immigrant Services Society of BC in Vancouver on December 15, 2016. Video by Jenny Uechi.

Alabbas says she feels she belongs to two cultures, a balance which Kuo says is healthy for newcomers adapting to their surroundings.

"Research shows that the ideal and most healthy scenario is balance," Kuo said. "This whole idea that you drop everything, you become 'Canadian' used to be a really good thing. But we now know the best case scenario is when the person can balance his or her own cultural identity, to feel pride, to have a supportive community in fostering that identity, but at the same time participating actively in the mainstream culture. When people can move back and forth between a bicultural identity, it gives them a sense of grounding. You don't just have to be who you are from your ethnic heritage, but also feel Canadian."