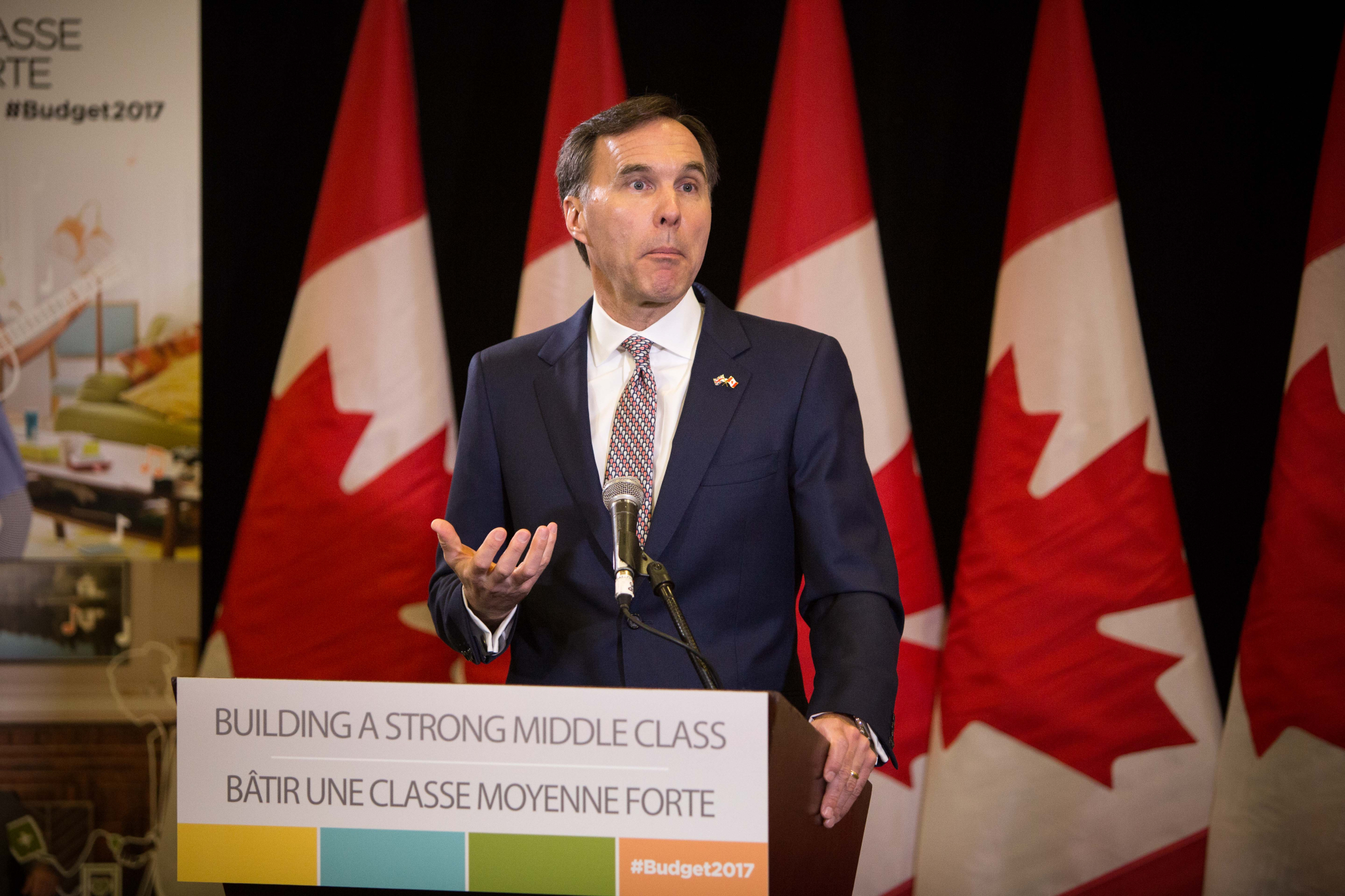 Finance Minister Bill Morneau addresses a question about his 2017 budget from a reporter in Ottawa on March 22. Photo by Alex Tétreault
Previous story
Next story

The federal government has tabled a budget that “does a lot of things right” for climate change, says Clean Energy Canada, but delays significant investment in clean growth until 2019.

According to budget documents submitted Wednesday by Finance Minister Bill Morneau, the $2 billion allocated for the establishment of a Low Carbon Economy Fund over two years has now been stretched over five years, meaning the eco-friendly initiative receives no funding until the start of the 2019 fiscal year.

The Low Carbon Economy Fund — part of the newly-negotiated Pan-Canadian Framework on Clean Energy and Climate Change — is intended to support provincial and territorial actions that reduce greenhouse gas emissions in an effort to meet 2030 climate targets. The delay, say the documents, is the result of “discussions” between Canada’s premiers.

But according to Clean Energy Canada, a research organization that focuses on sustainable development, the gap in spending isn’t necessarily a bad thing.

“I think that’s fair in the sense that there are a lot of important details still to come in areas like infrastructure, in how the pan-Canadian climate plan will come into effect, and in some of the innovation and clean tech elements,” said Clare Demerse, a federal policy advisor for Clean Energy Canada.

“This plan needs momentum. The climate plan needs to be a priority that we’re working on in the near-term in Canada, so money in the near term can signal that, but there are also times where you do need time to develop those projects and programs, and bring them forward.”

Sending the right signals to industry

Beginning in the 2018 fiscal year, over four years, the budget proposes $11.4 million in new funding to support the replacement of coal-fired electricity by 2030, $21.4 million to promote clean community heat and electricity in indigenous and northern communities, and $56.9 million to develop greenhouse gas regulations in the marine, rail, aviation, and vehicle sectors.

If approved, beginning in 2018 and 2019, the federal government will roll out $229 million over four years for research and development in clean energy and clean transportation programming. Beginning this year however, it aims to begin a four-year plan to spend $200 million over four years on bringing cleaner technology to the natural resource sectors, including agriculture, mining, fishing and forestry.

“I think it does a lot of things right and at the top level, it’s putting emphasis on clean growth as an area that Canada can succeed, and an area that we need to be investing in,” Demerse told National Observer. “That’s the kind of thing that sends signals to the sector — that this is a good place to be, and they will get the kind of support that can help them grow.”

This signal, she added, is particularly important as the administration of U.S President Donald Trump makes significant cuts to environmental protection and climate action.

During a press conference, Morneau declined to comment on how much of the budget’s latency is in response to instability south of the border, but emphasized that it was an “ambitious but responsible” long-term vision for Canada’s future.

He further declined to indicate how and when the Liberals planned to balance the books — information that was not included in the budget tabled Wednesday.

The plan does, however appear to address a particular funding gap left wide open by the Trump administration, with $79.5 million over five years beginning in 2017 to protect the Great Lakes and Lake Winnipeg. That new funding will become available starting this year if Parliament approves the new budget, the government said.

By 2022, Ottawa hopes to spend $114 million protecting marine and freshwater ecosystems, $201 million on improving air quality, and $260 million on adaptation and climate resilience. The latter includes funds to establish a Canadian Centre for Climate Services to build regional adaptation capacity and expertise, a national action plan to respond to the health risks posed by climate change, and climate change readiness measures for indigenous communities.

The government has further proposed to develop a new, cost-shared Disaster Mitigation and Adaptation Fund for built and natural, large-scale infrastructure projects that support resilience in the face of extreme weather events and natural disasters.

Editor's note: This article was updated at 10h10 a.m. on Thursday to correct two typographical errors.

re: "a particular funding gap

re: "a particular funding gap left wide open by the Trump administration, with $79.5 million over five years beginning in 2017 to protect the Great Lakes..."

So are we going to say "Trump owes us, big time" for protecting the Great Lakes (with the usual 10x Canada/US multiplier)?