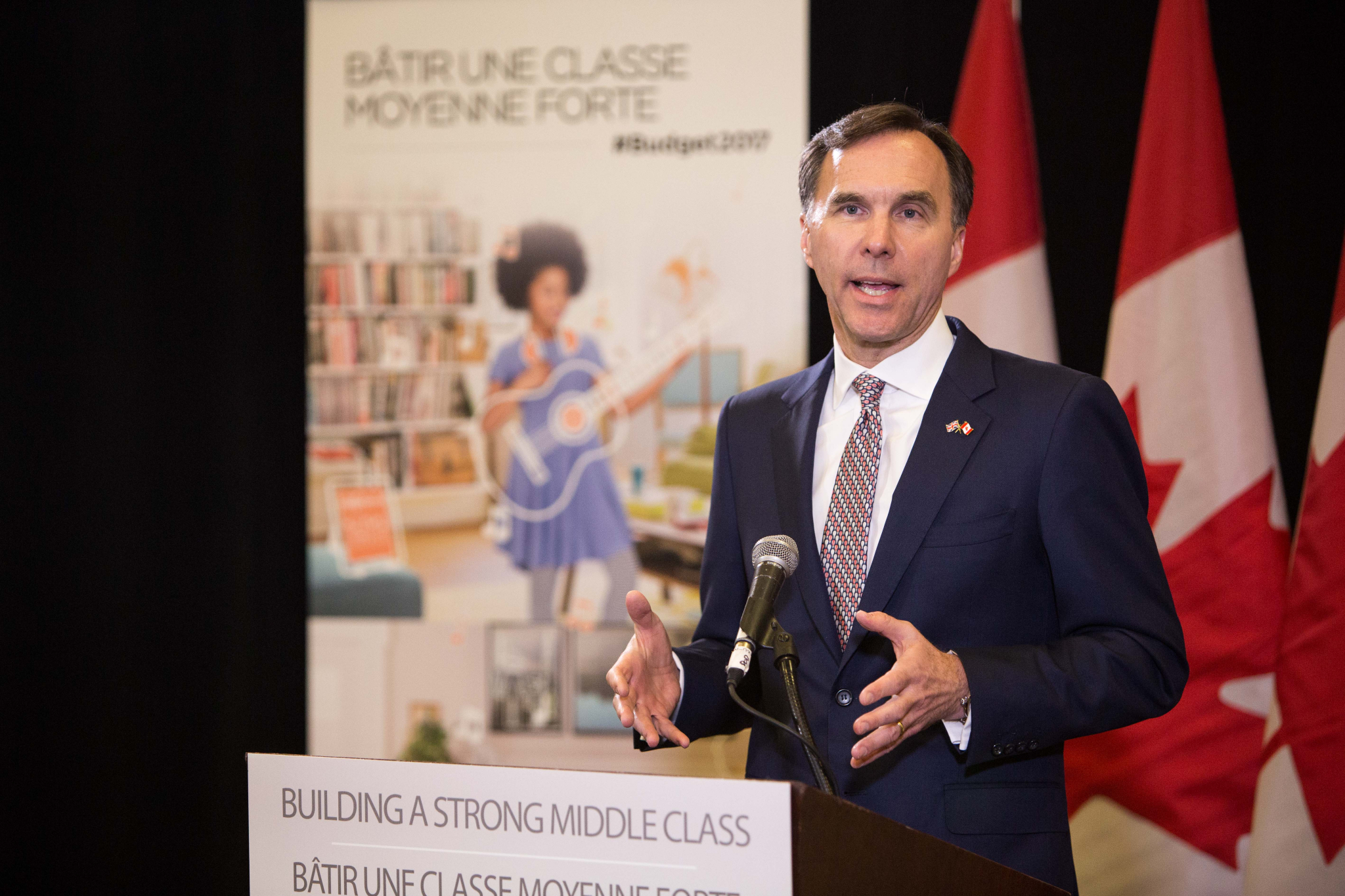 Finance Minister Bill Morneau speaks to reporters in Ottawa on March 22 about his new 2017 budget. Photo by Alex Tétreault
Next story

There are doodles of wind turbines and photos of four smiling people on the cover page of Finance Minister Bill Morneau’s new federal budget.

The annual budget plan is arguably the most important policy document introduced by the government every year.

It is normally introduced in the spring at the start of the fiscal year and it sets the government’s priorities by defining where Ottawa plans to increase or maintain spending and indicating areas where cuts are on the horizon.

This year, the images selected on the cover of the main budget document reflect the Liberal government’s message about building a stronger middle class through policies and investments focused on infrastructure and clean energy.

The government says there is not a whole lot of new spending this year, but includes more detail on how it plans to spend billions of dollars that were already allocated in 2016. This includes some elements of the government’s plans to invest in infrastructure as well as to address climate change and support clean economic growth.

The budget also stays the course on a bunch of policies, despite having a new administration running Canada’s largest trading partner, the United States, which is reversing many of the policies introduced under former U.S. president Barack Obama.

But in some cases, spending promised in areas such as clean energy are being spread out or delayed beyond what was originally planned.

Here are some key highlights from the new budget.

[This Repost was a Glitch, er

This comment is awaiting moderation by the site administrators.
Flag
Gerald Landry
Justin, in 1957 the "Great Pipeline Debate" in the Legislature voted to fund Line 1 with Taxpayers money, led by C.D. Howe a Liberal from Thunder Bay. It was built by the Northern Ontario Crown Pipeline Corporation then leased to TCP, Trans Canada Pipelines who 60 years later has left 30% of Ontarian's without access to N/G. Eg. Jellicoe, host to a Compressor Station for 60 years has never been provided service.

Please remove their Charter, they are a greed driven failure. www.ontarioruralgrowth.ca

Now they are the proponent to supply Fracked Methane for the 20 + LNG Export Terminals on BC's Sunshine Coast. Earthquakes anyone, Fort St. John, Cushing Oklahoma, Dallas... I Motion they Frack gas along Sussex Drive. I think you have been experiencing some "shake em up baby" of the earth trembling kind, have you not?« less

That folks for me, would be a TRUE REPRESENTATION as to just how bad Canada's economy REALLY IS folks.

[Now for the business at hand];

#8] Uber Tax, LoL, As counter thought, I have been proposing Heavy Haul Truckers pull off the "All Rights Reserved Card", along with “Right to Work”, and not bother with “Operating Authorities” refusing to pay for Commercial Weight Plates and tracking Inter-State Fuel Taxes - Mileage etc. It has been disgusting how Opportunist mayors and councillors have allowed Uber to destroy the livelihood of longstanding Taxi Business’s. I refer to this unchecked competition as “Part Time Pirates” often without any sense as to all the unseen Capital expenses real licensed business’s must adhere to. City Regulators should be ashamed of themselves for allowing this Uber Piracy to go on.

Shame now on our Federal Regulators who have not seen how exploitive Uber is. this opens the barn door for Uber Trucking and Air Service. Unregulated Free Trade at it’s worst, from the ground up.

These Men's Rights Activists Are Suing Women's Groups for Meeting Without Men; It’s an unexpected use of a decades-old civil rights law. Written by HANNAH LEVINTOVA JAN. 15, 2016 7:00 AM
http://www.motherjones.com/politics/2016/01/men-rights-unruh-act-women-d...

It will be interesting to see if there is outright discrimination and bias. There is already lack of a Minister for the “Status of Men”. Something that peaks my interest with ongoing bias and abuse in the Family Court system, for me being 7 years now with some well fed lawyers nourished by the taxpayer funded, Ontario Legal Aid system.