Liberals stick to their guns as U.S. again calls for NATO allies to spend more 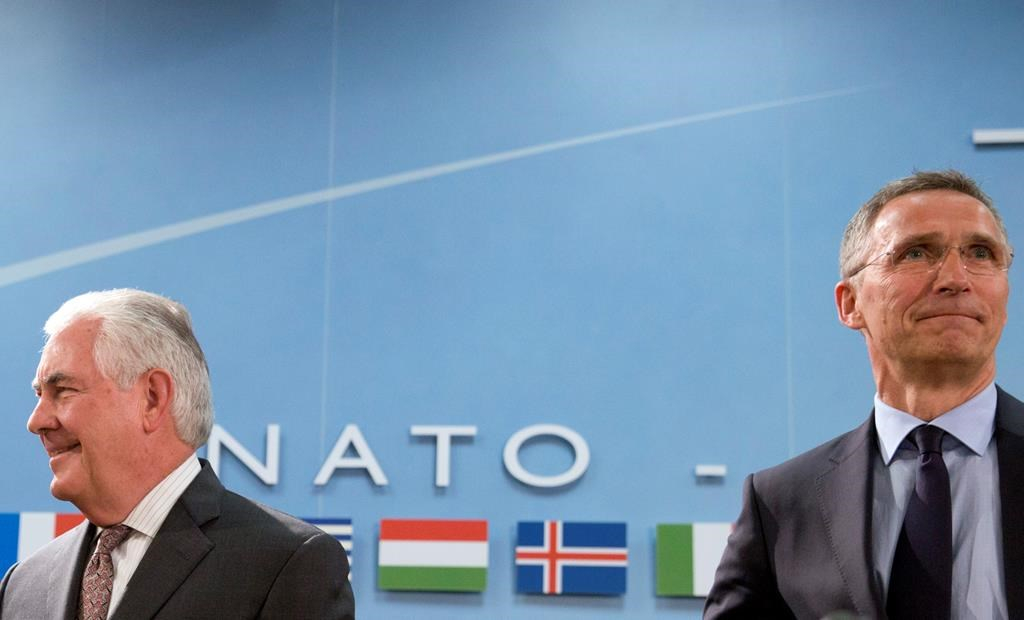 U.S. Secretary of State Rex Tillerson, left, and NATO Secretary General Jens Stoltenberg wait for the start of a meeting of the North Atlantic Council at NATO headquarters in Brussels on Friday, March 31, 2017. Photo by The Associated Press
Previous story
Next story

The Trudeau government has sent its strongest signals yet that Canada does not plan to bow to U.S. pressure to dramatically increase what it spends on defence.

U.S. Secretary of State Rex Tillerson warned at his first NATO meeting in Brussels on Friday that the Trump administration wants allies to draw up plans for boosting defence spending to two per cent of GDP by 2024.

"Our goal should be to agree at the May leaders' meeting that, by the end of the year, all allies will have either met the pledge guidelines or will have developed plans that clearly articulate how," Tillerson said.

Those plans are to include annual milestones that countries will be expected to meet on their way to attaining the two per cent target, which all NATO members agreed to work towards in 2014.

The Liberal government is currently working on a new defence policy, which is expected to be released before Prime Minister Justin Trudeau meets Donald Trump and other NATO leaders in Brussels in May.

Officials have said the policy will include a long-term plan for increased funding for the Canadian military, whose $19-billion budget currently accounts for only one per cent of GDP.

But neither Prime Minister Justin Trudeau nor Foreign Affairs Minister Chrystia Freeland referenced the pending defence policy when asked Friday about the Trump administration's calls for a spending plan.

Rather, in separate comments, both Trudeau and Freeland repeated the government's previous argument there are ways other than money to measure Canada's military contributions.

"We understand there are different metrics in terms of evaluating how people are pulling their weight and contributing fully to NATO," Trudeau said during an event in Toronto.

"Canada has always done more than its share in NATO and we will continue."

The prime minister and his foreign affairs minister pointed to Canada's upcoming mission in Latvia as proof of its commitment to the alliance.

Freeland said she told allies in Brussels that Canada remains committed to "work towards" the two per cent target, but "I noted that Canada has contributed to every single NATO operation since the alliance was founded."

Conservative defence critics James Bezan and Pierre Paul-Hus blasted the Liberals in a joint statement for having missed an opportunity to reassure Canada's allies by promising to double defence spending.

"The prime minister was given an opportunity today to assure our allies that Canada will meet NATO's defence spending targets and continue to be a trusted and responsible ally," Bezan and Paul-Hus said.

"Unfortunately, instead of stepping up and committing to a plan, Trudeau doubled down on his government's naive approach to national defence."

Tillerson is only the latest U.S. official to press NATO allies to spend more on their own defence, with U.S. President Donald Trump banging the drum the loudest.

There had been some suggestion last week's federal budget would include new money for the military, but it instead delayed $933 million in planned spending on new defence equipment by six years.

That is on top of $3.7 billion that was pushed until a later date in last year's federal budget, which officials have blamed in delays in several procurement projects.

Liberal officials, however, have said in private that the U.S. message is more for European allies, and that the Trump administration appreciates Canada's military contributions to Iraq, Latvia and Ukraine.

Defence officials are also looking at how Canada calculates its defence spending compared to other NATO allies, which could be used to demonstrate the shortcomings of the two per cent target.