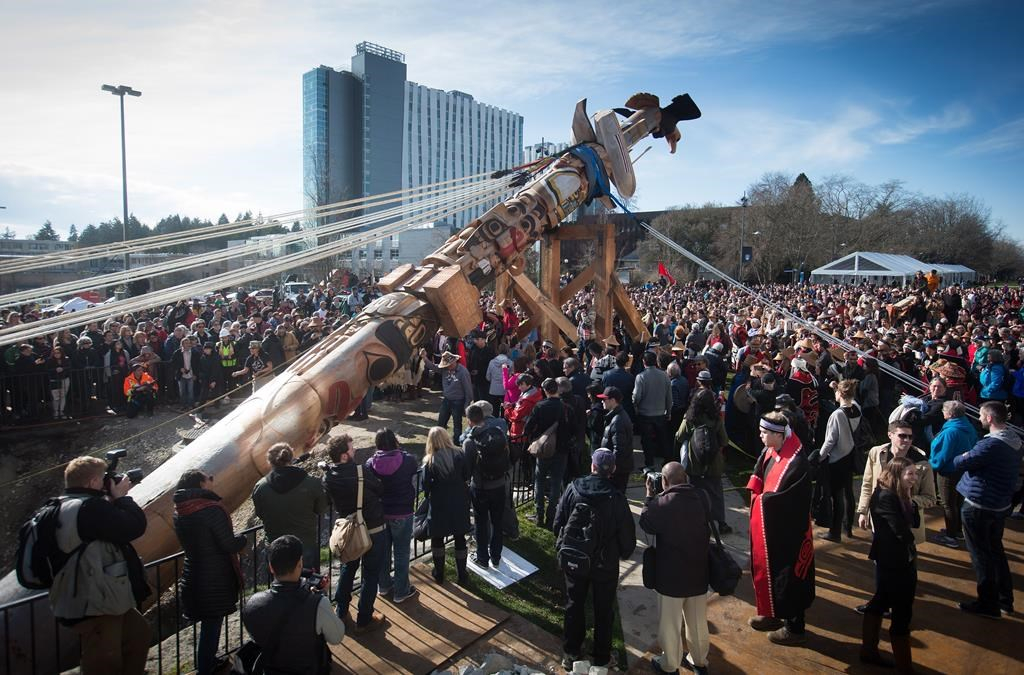 People gather to watch as a totem pole is raised in the spirit of reconciliation at the University of British Columbia in Vancouver, B.C., on Saturday, April 1, 2017. Photo by The Canadian Press
Previous story
Next story

A 17-metre totem pole installed at the University of British Columbia is a permanent reminder of the strength and resilience of the countless children victimized by the residential school system, one survivor said.

Elder Barney Williams used his remarks to a crowd gathered Saturday for the raising of the totem pole to talk about his experience of being raped and abused at a residential school on Meares Island, B.C.

"This is real folks, this is not something we make up because we want sympathy," he said.

The mistreatment of generations of indigenous people, he said, is a "Canadian problem, not just a First Nations problem."

Hart said indigenous artists from across Canada contributed to carving the pole, recognizing the extent of the torment that the schools inflicted.

The pole was carved from a 800-year-old red cedar tree on B.C.'s north coast. It's marked by thousands of copper nails representing the thousands of indigenous children who died in residential schools.

It's designed in three sections, representing life before residential schools, during and after, Hart said.

The pole located at the heart of the Vancouver campus, at the future site of the Indian Residential School History and Dialogue Centre that is slated to open in the 2017-2018 academic year.

Williams said it's more than just a symbol but an element of First Nations' culture and legacy that has endured despite the attempts of the residential school system to wipe out their traditions.

"It's part of a celebration that says 'I'm still here, we're still here.' We weren't beaten down to the point where we became non-existent," he said in an interview.

Adina Williams, a second-year student at the University of B.C. who is not related to Barney Williams, called the installation of the pole a "beginning" and said she hopes it teaches people about Canada's dark history.

She said her father spent seven years in a residential school, yet growing up, she never learned about the system.

"Throughout my years in high school and elementary school, there was very little acknowledgment of the residential school system. I think we spent a day on it in my social studies class in high school," she said in an interview.

She said she hopes that's changing, and with the university adding this monument to the campus, there will be more awareness about the abuse people endured.

"It makes me feel like that part of our history is being acknowledge, that the truth part of reconciliation is being known," she said.

Wynne apologizes for 'brutalities' of residential school system in Ontario