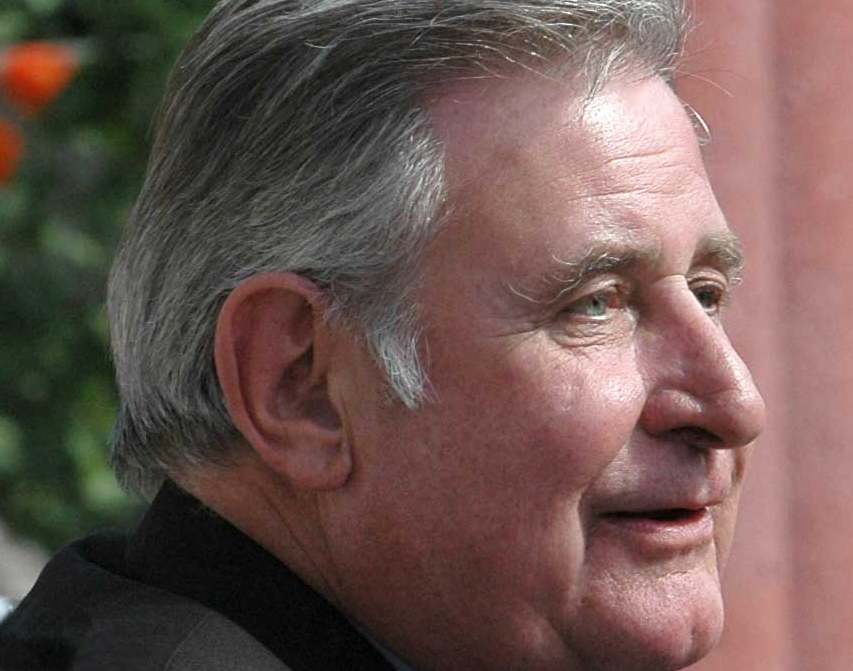 The late Ralph Klein was sworn in as premier of Alberta in December 1992. File photo taken in Calgary, Alberta, in 2005, by Chuck Szmurlo
Previous story
Next story

Anxiety was running high among oil and gas industry executives after a stunning court ruling in 1991.

In the June 12, 1991 decision, a panel of Court of Appeal of Alberta judges unanimously ruled that "abandonment of oil and gas wells is part of the general law of Alberta enacted to protect the environment and for the health and safety of all citizens."

The responsibility to properly abandon a well was binding on all who became licensees of oil and gas wells, even in bankruptcy.

The ruling came to be known as the Northern Badger case.

The anxiety it triggered was profound, but it was replaced with a newfound confidence after an unexpected boom in oilpatch activity and Ralph Klein's swearing in as Alberta premier in December 1992.

Under Klein, the Orphan Well Association was established. Wells are called “orphans” when there is no solvent entity to carry out abandonment and reclamation responsibilities. This industry-funded organization saw the already enormous problem of old wells multiply.

With Klein calling the shots, the oilpatch effectively escaped accountability for billions of dollars in reclamation obligations in exchange for merely plugging some wells after companies disappeared. In fact, the Orphan Well Association has only reclaimed about 700 sites in more than 15 years.

And today, Klein's environmental liabilities are about to blow up in the face of Albertans. 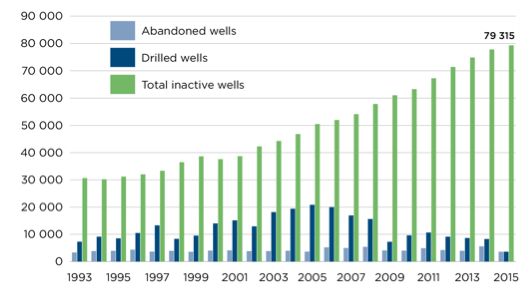 The overwhelming obstacle to industry accountability is the fact that these environmental liabilities have cascaded down from the companies that profited from the wells, and can afford to reclaim the well sites, to smaller and smaller companies that lack ability to meet the reclamation obligations.

A joint government/industry committee reported in 1992 that new companies with “inadequate financial resources to meet future well-abandonment liabilities” were taking responsibility for wells from established companies. In some cases, “well-licence transferors have disposed of valuable assets, leaving only liabilities within a corporate shell and thereby generating future orphan wells.”

And regulators weren’t duped; they didn’t just look the other way while these environmental liabilities were passed around like hot potatoes; they actively sabotaged their own regulatory programs to further facilitate this downloading of risk.

The only program that even began to address abandonment and reclamation with any real enforcement was the Long Term Inactive Well Program (LTIWP) launched, after considerable delay, following the 1997 election. With enforcement provisions that scaled up to legal action, the LTIWP was a five-year plan to safely plug wells that had been inactive for more than a decade.

It had some success in its first year, but as enforcement escalated in the second year, regulators lost their nerve. A second progress report was never produced and a dramatic change was announced in the third year. The Base Well Count assigned to each producer was supposed to be unchangeable. Regulators then let it be manipulated so companies could shift wells to smaller and smaller companies.

The rule change completely undermined the program’s objectives and allowed industry to game the program and loot it of deposits companies paid for well abandonment costs that could otherwise be left to taxpayers. Outrageously, regulators actually demonstrated to companies how to do so.

Six months later, with another election approaching, the program was cancelled – locking in the refunded deposits enabled by the rule change and relieving industry of any real obligation to so much as plug wells sitting dormant for decades.

Fading wells transferred so many times, basic information has been ‘lost’

The LTIWP was replaced in 2000 with the Licensee Liability Rating (LLR) system to calculate the amount of security deposits a company must provide to regulators to cover some of the costs of abandonment and reclamation that bankrupt licencees have left to taxpayers.

It literally took me all of five minutes of reading the regulatory directive on the formula used to calculate the deposits, to recognize the LLR program as a multi-layered charade that has cloaked Alberta’s growing mountain of environmental liabilities for more than 15 years.

Deposits are calculated on the difference between a company’s ‘deemed liabilities’ and ‘deemed assets.’ However, ‘liabilities’ are grossly underestimated and exclude more than 430,000 kilometres of pipelines, while ‘assets’ are exaggerated by grouping almost two million barrels of daily bitumen production in with the fading production of aging conventional crude and gas producers.

But the single biggest factor distorting the LLR program is the fact that current profitability is not used to calculate ‘assets.’ Despite clear wording, regulators are not using a three-year rolling average like their directives suggest.

Instead, regulators are still using a measure of industry profitability from 2008-10 (when both oil and gas prices were dramatically higher) to calculate ‘deemed assets’ – inflating the ‘asset’ side of the ratio significantly to spare producers from having to pay deposits on even a small fraction of their liabilities.

What’s more, in 2000, the Klein government had freed oil executives from liability. As further demonstration of their gross negligence, Alberta regulators made this gob-smacking admission in 2004:

“During the last 15 years, property sales were very high and many of these inactive wells were transferred numerous times. With the sale of these wells, knowledge of wellbore conditions, and in some cases even knowledge of the well’s existence, was lost.”

The law as a weapon against Albertans and the environment

In early 2015, Alberta was well into the current decline in oil prices and new Progressive Conservative leader Jim Prentice was campaigning to further intensify austerity and permanently remove resource revenue from the annual budget, instead placing an increasing share of the paltry sum still collected into the Heritage Savings Trust Fund.

A spotlight was about to shine once again on who should pay when a company wants to walk away.

Redwater Energy was a small company with more than 100 inactive wells and $5 million in debts to Alberta Treasury Branches (ATB Financial), a provincial Crown corporation.

ATB expressed confidence that its loans to Redwater Energy would be repaid in full – despite lower commodity prices and despite being fully aware of the company’s reclamation liabilities.

Suddenly, one week after the surprise election of the provincial New Democratic Party, however, ATB forced Redwater into receivership. And one week after ATB CEO Dave Mowat was appointed chair of the new government’s promised royalty review, the regulator was informed that Redwater’s inactive wells were going to be left for someone else to clean up.

ATB intended to sell the company’s active wells to pay itself back the millions it lent Redwater in 2013 and was relying on a clause inserted into federal bankruptcy law in 1997 to counter provincial regulators’ insistence that it was responsible for all of Redwater’s wells, not just the profitable ones.

In the midst of the royalty review in October 2015, ATB applied for the appointment of a trustee to liquidate Redwater’s active wells while it defied the regulator’s abandonment and closure orders for the inactive wells.

The 2016 Redwater Energy case was a virtual replay of the 1991 Northern Badger case – except the outcomes were polar opposites. Where it was earlier recognized that environmental cleanup had a super-priority over lenders and that companies were jointly and severally liable for environmental obligations, in 2016, Alberta’s chief justice ruled that banks came first and Redwater could not be forced to clean up its mess.

The Redwater decision was the culmination of two decades of the industry downloading its risk, and of legislators effectively rendering polluters and their bankers immune from the environmental consequences of their profit.

The key difference between the 1991 and 2016 court cases was that the federal Bankruptcy and Insolvency Act (BIA) had been amended in 1997.

“The most important substantive change,” wrote environmental legal scholar Dianne Saxe, “is that trustees (including receivers) have the qualified right to abandon contaminated property. When that property has been abandoned, the trustee cannot be required to comply with any remedial order relating to that property.”

Saxe noted the 1997 BIA amendments failed to distinguish the need to prevent irreparable future harm in cases like Northern Badger from other environmental requirements lacking special reason to trump other monetary claims in a bankruptcy. Presciently, she lamented: “This is most unfortunate, and will lead to unnecessary hardship, injustice and waste.”

“In an ideal system,” Saxe added, “bankruptcy priorities would reflect a functional analysis: urgent claims to prevent future harm to significant public interests would take priority over mere monetary claims… This is not, however, the approach taken in the [1997] Bankruptcy and Insolvency Act provisions.”

The impact of the amendments “provides an incentive to failing companies to dishonor environmental orders,” lawyer Alexander Clarkson wrote in the University of Toronto Faculty of Law Review.

Clarkson, along with Nicholas Chaput, are among the very few specialists to have studied the environmental super-priority in depth.

Resource extraction industries often rely heavily on debt financing, “Therefore, when commodity prices fall, the solvency of the company falls dramatically and the company is quickly unable to comply with [environmental] orders,” Clarkson wrote. The secured lenders could obtain a receivership order and remove whatever the remaining value that could have gone to environmental cleanup.

Which brings us back to Redwater Energy and the government-owned ATB. The 2016 decision by Alberta’s chief justice “flies in the face of any conception of the polluter-pays principle,” says Nigel Bankes, University of Calgary Chair of Natural Resource Law.

“Any effort to restore the pre-eminence of the polluter pays principle will require statutory amendments [and] changes in regulatory practice. The most obvious candidate for amendment is the BIA itself but this may well prove to be an immovable object given the desire to protect the interests of secured creditors.”

Alberta needs a super-priority to prevent producers from escaping liability through bankruptcy, but the changes can only come federally. Because the Redwater decision has national implications, all Canadians need that super-priority to hold all polluters accountable for cleaning up mines and pulp mills in bankruptcy. Without it, polluters will simply walk away with their pockets stuffed full of money, leaving taxpayers burdened with the cost of cleanup.

Editor's note: This article was updated at 8:52 p.m. PT due to an editing error to correct that the late Ralph Klein was sworn in as premier of Alberta in December 1992, more than a year after the ruling in the Northern Badger case.

I thought 40 plus years of

I thought 40 plus years of conservative rule in Alberta provided enough examples of colossal stupidity. This one is the worst to date.

Your article Regan is so very