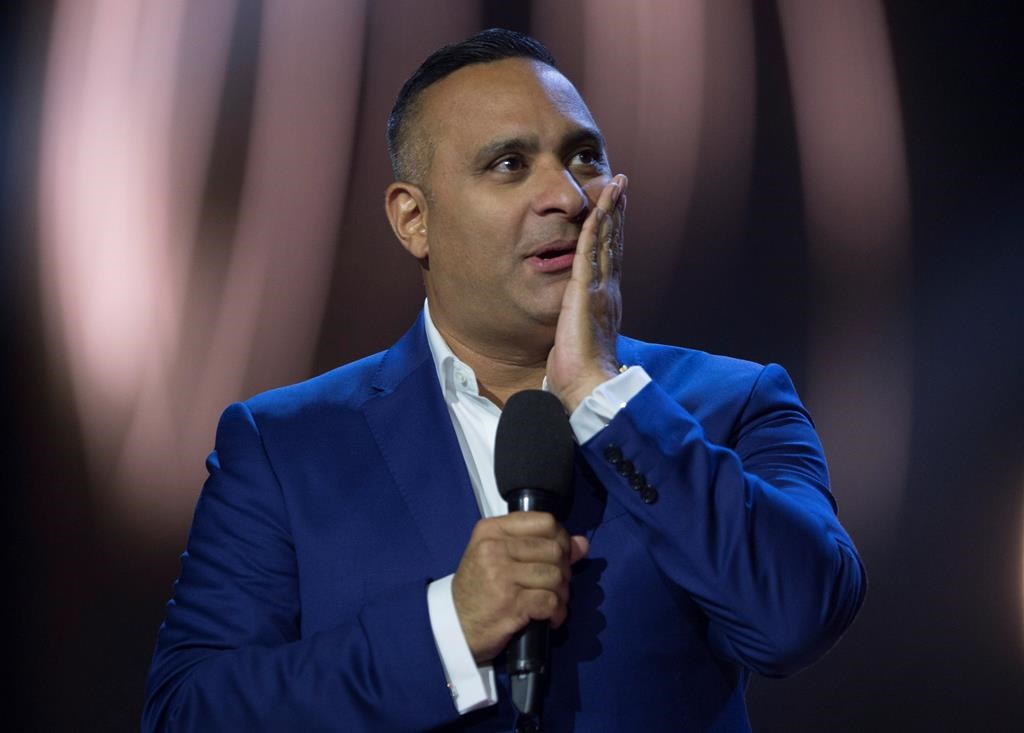 Russell Peters hosts the Juno awards show, Sunday April 2, 2017 in Ottawa. The head of the Juno Awards is apologizing for comments that co-host Peters made during Sunday's telecast. Photo by The Canadian Press
Previous story

The head of the Juno Awards is apologizing for comments that co-host Russell Peters made during Sunday's telecast.

In a statement, Allan Reid distanced himself and Juno organizers from jokes that have been criticized for sexualizing women.

The comedian opened the show with a monologue that referenced young girls in the audience as a "felony waiting to happen."

Peters also jokingly questioned why Heritage Minister Melanie Joly was handing out an award, but added that it didn't matter because "she's hot, so who cares?"

Reid, who is also president of the Canadian Academy of Recording Arts and Sciences, said the Junos do not "in any way support, nor did we sanction, the off-script remarks."

Others weighed in through social media, including a Twitter user with the handle Raging_Fem who wrote: "Leave it to (Russell Peters) to remind young women that they can be victims of sexual assault at any time."

Musicians also offered their take after the Junos wrapped.

Singer-songwriter Sarah Harmer used Twitter to urge Reid to make a public statement about Peters' on-air remarks. She said the joke about young women "had no place on the Junos."

Ian Campeau, a member of A Tribe Called Red, blasted Peters' comments in a Facebook post. He said his daughters heard the sexual assault joke immediately after his opening performance that paid tribute, in part, to missing and murdered indigenous women.

"Think about that," Campeau wrote in part of the message.

Among tweets liked by Peters' account was one from a user named LeafsOriginal6 who wrote: "Problem now in the world you say something no one likes and everyone wants your career to end."

Added user HinaTweetsNow: "I actually thought his joke was pretty funny, because young women DO get assaulted at big events like (the) Junos. Comedy (with) truth is funny IMO (in my opinion)."

Before Sunday's big show, the Junos were grappling with complaints over a lack of female representation among this year's nominees, particularly in technical categories such as producer.

Artists including Amy Millan, a member of Broken Social Scene and of Stars, have pointed out the lack of gender diversity among the Juno nominees, while pop duo Tegan and Sara urged their peers to encourage more young women to enter the industry.

"CARAS and our charitable arm MusiCounts conduct significant efforts to engage and support women, particularly funding initiatives for girls in school and community music programs," Reid said in his statement.

"While we understand that there is still a lot of work to be done in these areas, we firmly believe the first step is empowering females. CARAS, the Juno Awards, and myself, deeply apologize for the upset this has caused. This incident is not reflective of any views held in our organization."

Editor's note: This story was updated at 9:30 am on April 5 to correct an error in the byline

Canadian politics and its WrestleMania lookalikes

When a Juno doesn't pay the bills: 5-time nominee moonlights as a school teacher

By The Canadian Press in News, Politics, Culture | February 27th 2017