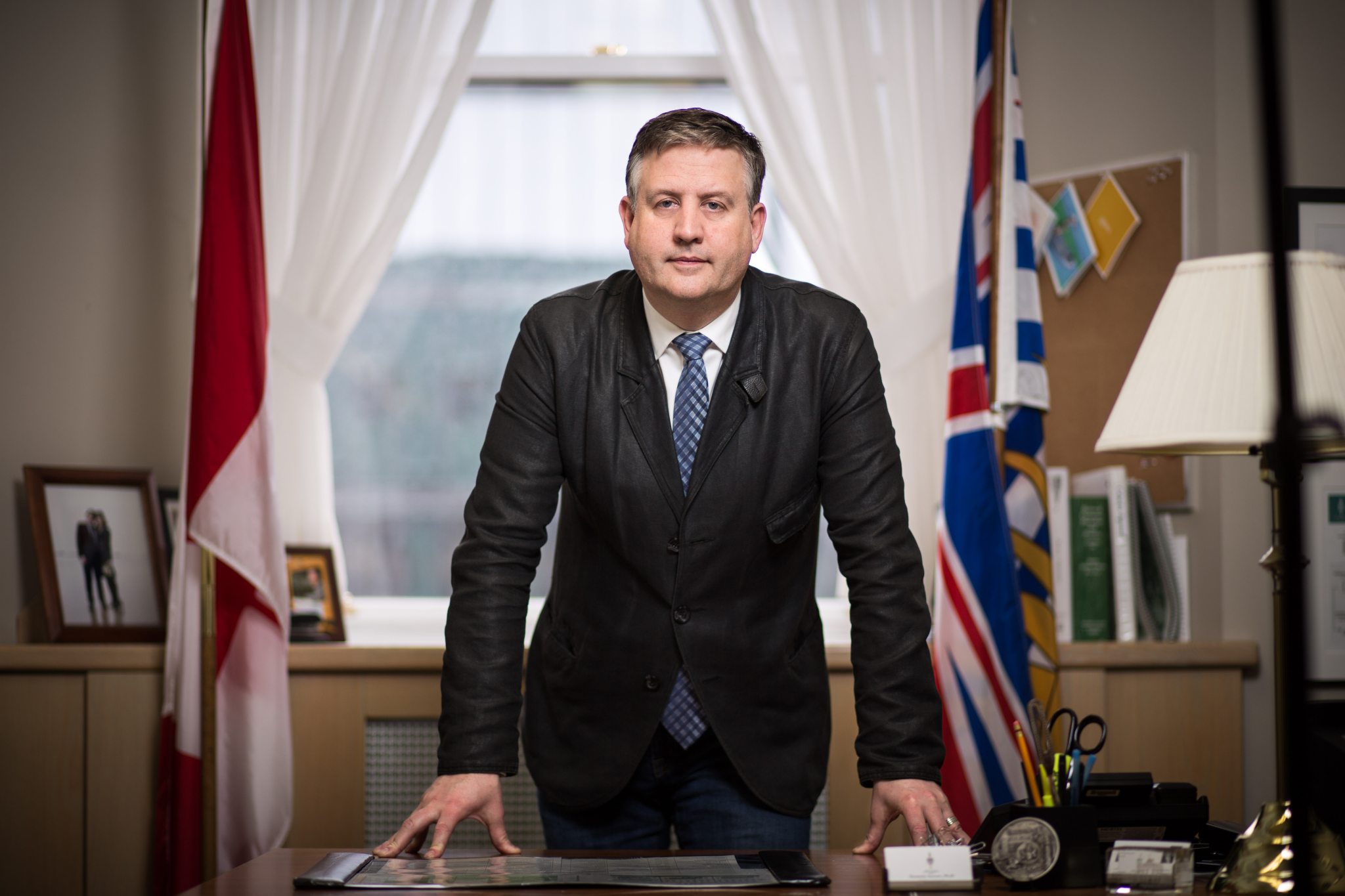 One by one, property owners in Burnaby, B.C. are discovering that their land lies on the route of a major new pipeline project.

Kennedy Stewart, a New Democratic Party member of Parliament from Burnaby-South, has been one of the pipeline project’s most vocal opponents, describing himself as the person "leading the charge against Kinder Morgan in Ottawa."

“I’ve had thousands and thousands of interactions with people about the project, but now people are starting to see effect of the (Trudeau) decision (to approve the pipeline),” Stewart said in an interview with National Observer at his Ottawa office last Friday.

The Trudeau government introduced additional steps to the previous federal review in an effort to improve the process and respond to criticism that it was rigged in favour of approval. But these temporary measures still wound up leaving some local families and businesses in the dark about how the project would affect them.

“People have been getting visits from Kinder Morgan land agents, there has been surveying on property and they are now starting to get official letters saying that ‘we will be visiting you to talk about how we’re going to put this pipeline through your property,'" Stewart said.

The company has not yet made a final investment decision to proceed, but if built, the Trans Mountain expansion would triple the capacity from existing pipeline infrastructure to up to 890,000 barrels of crude oil per day shipped between the Edmonton and Vancouver regions.

Project supporters say the pipeline expansion would generate jobs and support growth in Alberta’s slumping oil and gas sector. Critics say that the expansion would dramatically increase the risks of spills on land and water as well as drive more heat-trapping carbon pollution into the atmosphere from Alberta’s oilsands sector — Canada’s fastest growing source of greenhouse gas emissions.

Kinder Morgan told National Observer that it has a good track record of working with local communities on its projects to respond to local concerns.

But with notices starting to show up in mailboxes or local newspapers, it leaves property owners with 30 days or less to raise objections with the federal pipeline regulator, the National Energy Board (NEB). Stewart blames the regulator and the company for keeping many in the dark about what was about to happen.

Stewart, who was first elected in the 2011 general election after working as an associate professor at Simon Fraser University, said that many locals are only finding out about being affected by the pipeline now because of his own efforts to inform them, including through a new section on his website.

The NEB told National Observer in an email that it had instructed Kinder Morgan in a Feb. 10 letter to give notice to everyone affected by its pipeline route. The regulator has also deployed its staff in the Vancouver region to conduct outreach activities.

The process for a landowner to object to the route is spelled out in Canada's NEB Act and it gives powers to the NEB to decide how to proceed.

After someone raises an objection, the NEB said it would decide if their submission was “valid."

That means the person objecting has to explain, in writing, the nature of their interest and the grounds for the opposition to the proposed detailed route of the pipeline. Any landowner can download the forms for drafting a notice of objection from the NEB website.

The regulator said it would subsequently set up a hearing to review concerns and decide whether a route change is needed. And after any decision by the NEB, a person may also appeal to a federal panel that operates under the Natural Resources Department.

But since the government has approved the pipeline, Stewart said the odds are stacked against property owners. In the absence of any appeals or court challenges, Stewart said that this federal approval will allow company workers to call upon police officers to enter someone’s land and appropriate whatever they need to build their pipeline.

“Remember, when they build this, it’s in perpetuity on your property,” Stewart said. "They can give you compensation and tear your house down: legally now. And you can’t do anything other than argue for more compensation and that’s why getting an objection now is very important.”

He added that those who stay on their property might get some unexpected surprises on their insurance bills.

“I’ve talked to insurance companies who say that property insurance will go up because there’s increased risk and none of that stuff is really factored into the (federal approval) decision,” Stewart said.

Canada’s insurance industry declined to answer questions about what would happen to insurance rates if and when the pipeline is built. The Insurance Bureau of Canada, a lobby group that is the voice of the country’s insurers, said that consumers should shop around and check with their insurers to see what factors affect their premiums, and that people can still find “affordable home insurance” even though there are pipelines running through the majority of Canada’s provinces.

But it denied being secretive.

“I'm not declining to say. I answered your question,” said Andrew McGrath, a spokesman for the Insurance Bureau of Canada. “I'm saying it's up to individual companies to determine their own factors. We're not a regulator.”

Several individual insurers contacted by National Observer also declined to comment on the issue, including TD Bank, an institution that offers property insurance and which also has financial ties to the Kinder Morgan project.

“Thank you for reaching out, however, your question is best directed to the industry representative on this: The Insurance Bureau of Canada,” TD Bank spokeswoman Alison Ford told National Observer in an email.

TD Bank declined to answer further questions about Kinder Morgan, insurance of pipelines, and whether it was having any internal political discussions about avoiding public comment on the issue.

They can take your property, says Kennedy Stewart

From a legal standpoint, the federal government has given the Texas-based Kinder Morgan a “right of entry” onto the property it needs to build the new pipeline, Stewart said. But he believes this would be the same thing as expropriating their land. Anyone who says otherwise is trying to confuse people about what’s really going to happen, Stewart said.

“I understand (the correct term to use in Canada) is 'right of entry,' but expropriation is what people understand (is happening),” Stewart said. “In the U.S., they call it eminent domain. So to me, all of these terms are basically the same. So I have used it and I’ll continue to use it. Because unlike the National Energy Board and Kinder Morgan, I actually want people to understand what’s happening here. And they say: ‘right of entry. What’s that? Somebody can walk on my property?' No, they can take it, they can remove structures. You can never put another structure up if it happens to go through your house.”

Stewart said he had heard from a small condo developer that learned its project was at risk because it never knew the pipeline would cut through its property. Stewart declined to name the developer, explaining that the company has not decided whether or not to go public. But he said that this real estate company was scrambling after detailed planning and rezoning efforts now appear to be derailed by the pipeline.

“They’re just panicked and they don't know what to do,” Stewart said. “They’re not political people. They’re not folks that can just go out and hold press conferences and they feel really under the gun trying to catch up quickly about... what their rights are... This is a life stream that’s being crushed.”

In another case, Stewart noted that the pipeline route would travel near Burnaby Mountain Secondary School.

But Kinder Morgan told National Observer that the current pipeline route would be separated from this school by two roads of four to six lanes.

“Our land agents and engineering team have been working directly with each of the landowners to identify and address their concerns,” the company said in an email. “For more than 60 years we’ve been a good neighbour and it’s very important for us to continue to have a good relationship with the people in the communities we operate in.”

The company also said that “Trans Mountain works with landowners to find joint equitable solutions whenever issues arise, including discussions around compensation for land rights, damage and inconvenience.”

From Stewart’s perspective, this is not enough. He believes the entire approval process could morph into a class action lawsuit.

“I have spoken to some lawyers,” Stewart said. “In my office here as an MP, I’m not allowed to hire lawyers using public resources, but I can talk to them. So I do talk to lawyers and they do think there’s a possibility of a class action suit — just (because) of the way the consultation took place.”