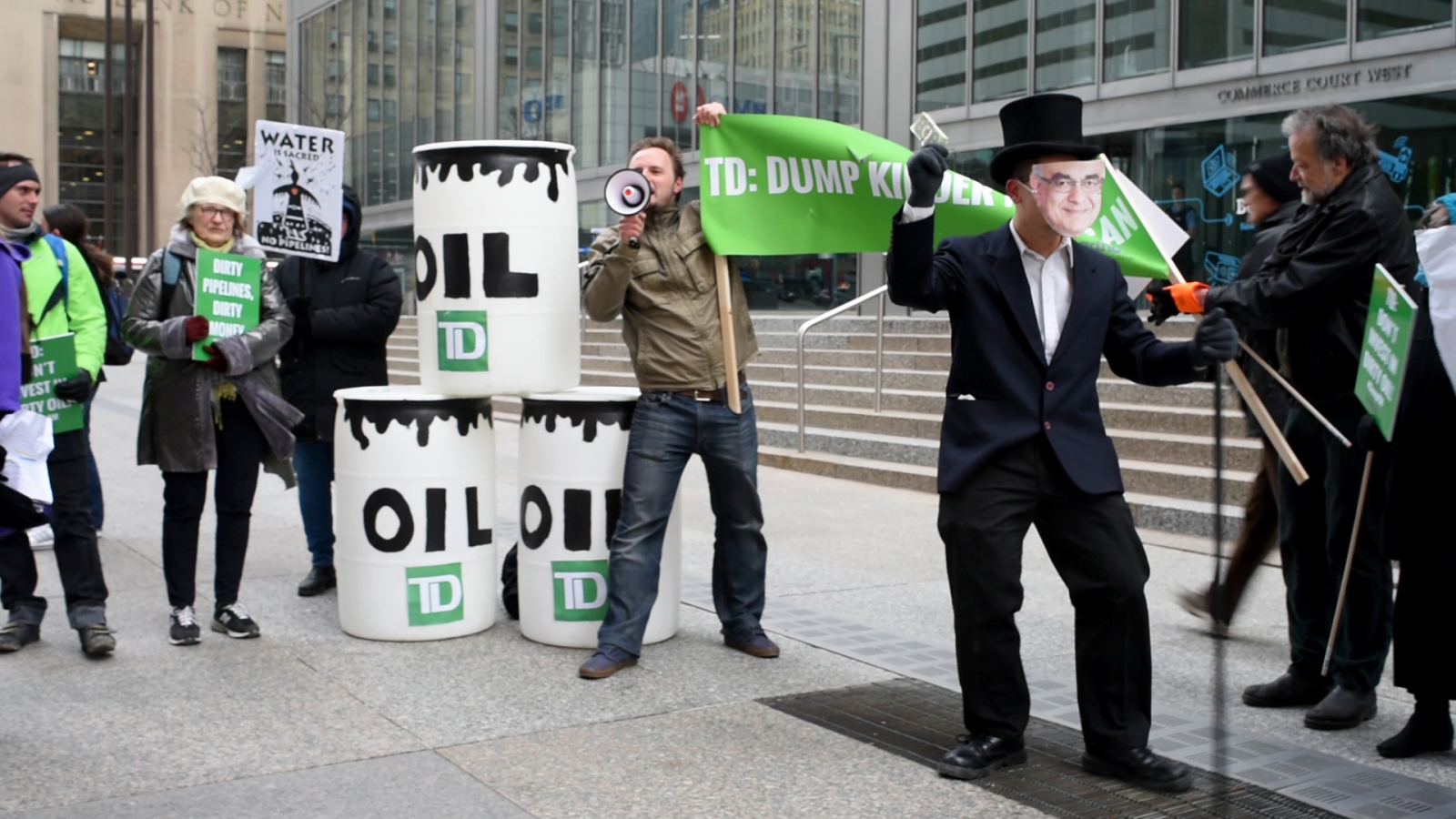 Protesters on Thursday, March 30 handed TD CEO Bharat Masrani a petition with 25,000 signatures calling on the bank to end its partnership with Kinder Morgan. Photo by National Observer
Previous story
Next story

Protesters inside and outside TD’s annual general meeting in Toronto on Thursday threatened to cause "brand damage" to the major Canadian bank if it fails to sever its financial ties to Texas-based energy company Kinder Morgan.

TD is helping Kinder Morgan to find investors for its $7.4 billion Trans Mountain pipeline expansion project, which would triple the capacity of a pipeline carrying oil from the Alberta oilsands to Burnaby, B.C., Reuters reported earlier this year. The project has faced fierce opposition from environmentalists, indigenous communities and local governments in B.C.

The protesters handed TD CEO Bharat Masrani a petition, signed by almost 25,000 people, demanding the bank to end its partnership with the pipeline company, but their calls appeared to fall on deaf ears.

“We believe conventional energy sources like oil and gas will – for the foreseeable future – sustain our economy, create jobs and support a standard of living that our customers and communities want. The transition to a lower-carbon economy will be gradual," Masrani told shareholders on Thursday, according to a transcript provided by a TD bank spokeswoman.

Fossil fuel companies rely heavily on investments from banks to raise capital to proceed with multibillion dollar projects. In one recent example, TD lent $360 million to finance the Dakota Access Pipeline, which has found itself at the heart of violent confrontations involving indigenous people, environmentalists, law enforcement and private security guards.

Masrani said he understood concerns about the bank’s involvement in the Trans Mountain project, noting that “some may find it hard to reconcile our role in this project with our focus on operating in an environmentally responsible manner.” But the bank has no plans to stop investing in the "responsible development of natural resources," he said.

The petition got a last-minute signature from a shareholder inside the bank’s annual general meeting, who added her name as the petition was handed to the company’s CEO, protest organizer Logan McIntosh told National Observer.

McIntosh, a spokeswoman with advocacy group Leadnow, said that any institution that works with Kinder Morgan should expect the same attention from activists.

Leadnow and other groups pushing for serious action to address climate change have increasingly been targeting the money behind oil companies as part of their campaigns to slash heat-trapping greenhouse gas emissions.

“It’s an issue that seems to be picking up a lot of steam,” McIntosh told National Observer, alongside about 20 protesters outside the bank's head office in downtown Toronto. "Any kind of institution or bank who is partnering with Kinder Morgan is setting themselves up for a vulnerability or liability."

Inside the bank’s Bay St. headquarters, Serge Simon, Grand Chief of the Kanesatake Mohawk Council, delivered a warning to shareholders: “In helping to finance Kinder Morgan, Line 3, Energy East and so on, you’re funding human rights abuses and treaty violations, and we’re not going to stand for that type of thing,” he said in an interview after the meeting on Thursday.

Simon is a representative of the Treaty Alliance Against Tar Sands Expansion, an agreement between 122 North American first nations and tribes that calls for collective resistance in response to a threat against any one treaty member. Simon said he offered shareholders a choice: stop supporting projects like Trans Mountain and work with indigenous people on sustainable projects, or expect a fight: “These unwanted projects are not going to come through our respective territories.”

He said that coordinated resistance from indigenous people across North America would stop Kinder Morgan, “one way or another.”

Simon told National Observer that he reminded TD’s shareholders of the 1990 Oka Crisis, when Mohawk warriors in Kanesatake, Que. took up arms and built barricades to oppose the expansion of a golf course onto their traditional land. Quebec provincial police officer Marcel Lemay was killed, and the army eventually mobilized before the 78-day standoff ended.

Raising the memory of Oka wasn’t a threat, but “a lesson of the past,” said Simon, who lived in Kanesatake at the time of the crisis and recalls the confrontation and gunfire that led to Lemay’s death. He said that treaty chiefs would support peaceful pipeline resistance. “I don’t want to see another Oka,” he said.

Simon also spoke out against what he called TD’s “shameful” decision to loan $360 million to finance the Dakota Access Pipeline, which crossed through the Standing Rock Sioux Tribe’s land. “They have been victims of attempted genocide for about 150 years, and now they have these new scars they’re going to have to carry,” Simon said.

Leadnow’s Logan McIntosh said the group was able to present their petition to the meeting thanks to two TD shareholders who donated their votes to allow the group’s representatives into the meeting.

McIntosh said Leadnow has received thousands of messages from TD customers, many pledging to close their accounts if the bank doesn’t end its partnership with the energy company. “That’s the risk that’s going to come now from partnering with Kinder Morgan,” she said.

She pointed to the Ontario Teachers’ Pension Plan (OTPP), which has come under pressure recently from protesters demanding that the fund drop its investments in fossil fuels, particularly after Reuters reported in February that representatives of the fund had met with Kinder Morgan to discuss financing for the Trans Mountain expansion. A spokeswoman for the OTPP confirmed on Thursday that the fund is not currently in talks with the company about financing the project.