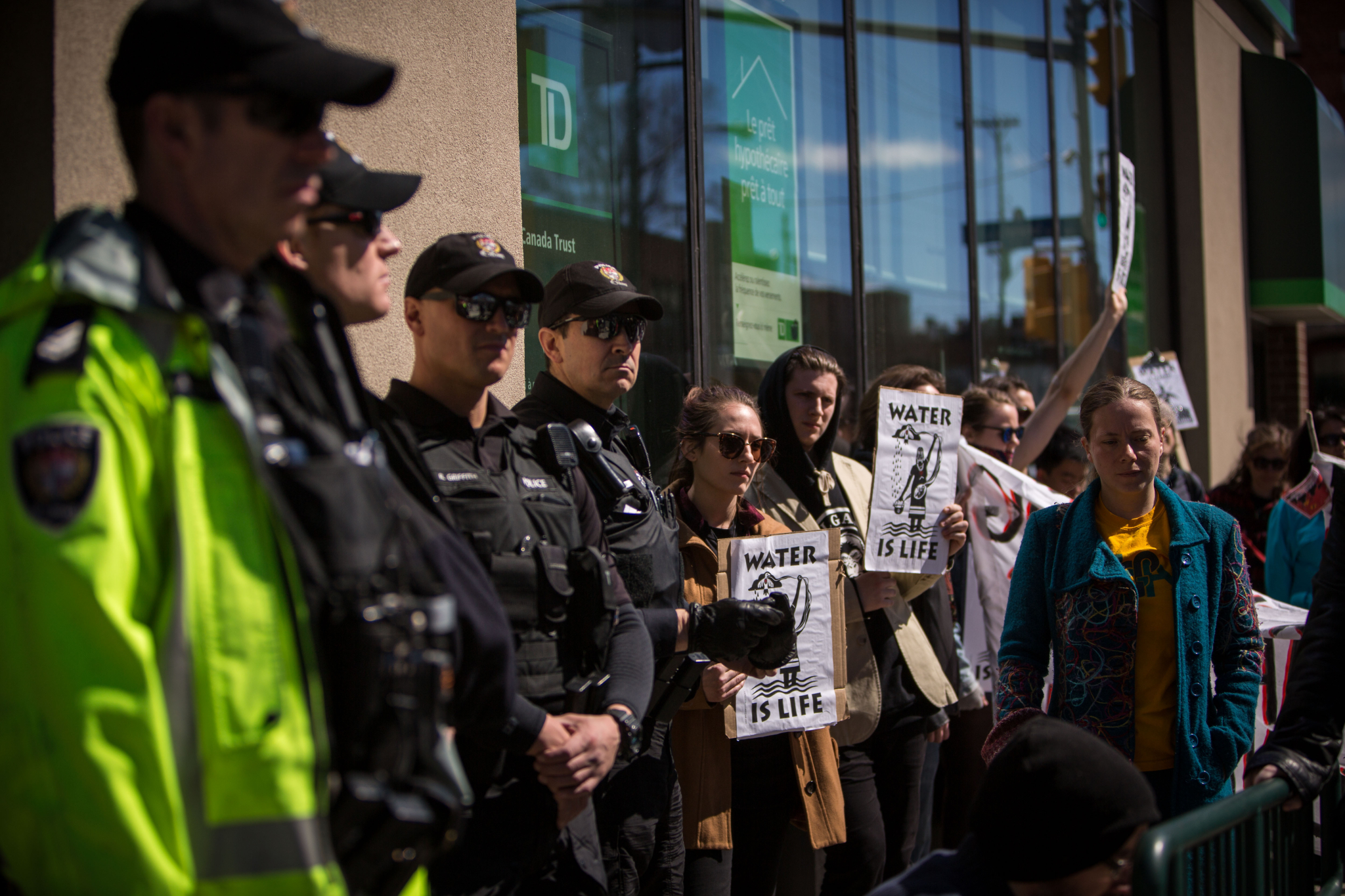 Ottawa Police keep an eye on a peaceful protest at a downtown Ottawa TD bank branch on April 8, 2017. Photo by Alex Tétreault
Previous story
Next story

Even the dogs appear to be mad at TD Bank these days.

The embattled financial giant found itself on the receiving end of some unwanted attention on Saturday as Ottawa residents took to the streets, challenging the bank to cancel its ties to rapid expansion of carbon pollution from fossil fuels.

TD has also been under the microscope lately following reports its employees allegedly broke the law to meet sales targets and keep their jobs.

The protesters, in a family-friendly gathering that included children and pet dogs, called for the bank to end its financial dealings with the Dakota Access Pipeline (DAPL), as well as the Kinder Morgan Trans Mountain expansion project.

A local organization named the Indigenous Peoples' Solidarity Movement Ottawa organized the protest at the downtown Ottawa TD Bank branch. They said their action was in solidarity with the Standing Rock Water Protectors. This follows a recent protest in Toronto also against TD that warned the bank would suffer brand damage if it continues to back controversial fossil fuel projects at a time when the world is trying to wean off fossil fuels and prevent dangerous climate change.

TD CEO Bharat Masrani defended his institution's ties with fossil fuels in a meeting with shareholders last month, but said he understood there were concerns about what was happening. He also said his bank has no plans to stop its involvement in the "responsible development of natural resources."

In images, here is how Ottawa residents responded to those words.

The gathering began next to City Hall just after 1 p.m. local time. The destination of the protest was initially a mystery, but once the action got underway, the banners started to come out identifying TD Bank as the target. After speeches by the event's MC, Ottawa resident and indigenous and Canadian studies student Kirk Kitzul, and by Ottawa resident Jocelyn Iahtail, originally from Attawapiskat, the group set off, led by Kitzul and under police escort, to reach the TD Bank's branch, two blocks south on Elgin Street. Occasionally, the protesters were greeted with some honks of support from passing motorists.

The Kinder Morgan pipeline was approved by Prime Minister Justin Trudeau's government last November. Supporters say the project will help fuel growth and jobs in Alberta's slumping oil and gas sector, while opponents fear the project is too risky since it could cause spills as well as make it more difficult for Canada to meet its international climate change commitments.

The fuel that would be shipped on the pipeline would come from Alberta's oilsands sector, Canada's fastest growing source of greenhouse gas emissions. The sector now faces a cap on its annual emissions, under a new climate change plan introduced by the Alberta NDP government. But these annual emissions would still be allowed to grow about 40 per cent under the cap imposed by the government.

One of the main objectives of the event was to hand a letter to the manager of the bank's branch, addressed to Masran, the TD chief executive and his colleagues, calling for them to withdraw TD's financial support and investments in the DAPL and Kinder Morgan projects. A customer service manager, Reilly Vamplew, came out to greet the crowd with a wave and a smile. The event's organizers handed him the letter and shook his hand, and the event ended soon after.

Here is the letter that was handed to the TD Bank branch manager:

Reached by email after the event, the Indigenous Peoples' Solidarity Movement Ottawa said it was "inspired by the approximately 100 people who were there". The organization touted their actions as a success, stating that "the message was sent loud and clear to those with financial stakes in the pipelines that their investments are at risk".

"TD CEO Bharat Masrani defended his institution's ties with fossil fuels in a meeting with shareholders last month, but said he understood there were concerns about what was happening. He also said his bank has no plans to stop its involvement in the 'responsible development of natural resources.'" So, it is quite alright to advise-urge employees to sell TD products regardless of consequences to the buyers--it only matters to make money for TD. This is certainly the capitalist-corporate image of growth at all (customer) costs. This CEO hasn't an ounce of sympathy for the common man. He hasn't any idea of what is happening at the planetary ecosystem level. He has no idea, or no sympathy, for the extremes of weather and climate that are happening right now. If he did, his answer would be more comprehensive, more understanding of the situation we are facing. The extreme weather events in Canada, in the USA, and around the world apparently are escaping his recognition. He does not make a connection between another fossil fuel project, another pipeline, another plant to produce more, more, and yet more fossil fuel. He is part of the continuing growth, growth without end philosophy, on a finite planet with increasing population and finite resources. The solution is in front of him, if he cares to recognize it, is renewable resources in a steady state society.
-Global surface temperature relative to 1880-1920 based on GISTEMP analysis (mostly NOAA data sources, as described by Hansen, J., R. Ruedy, M. Sato, and K. Lo, 2010: Global surface temperature change. Rev. Geophys., 48, RG4004.