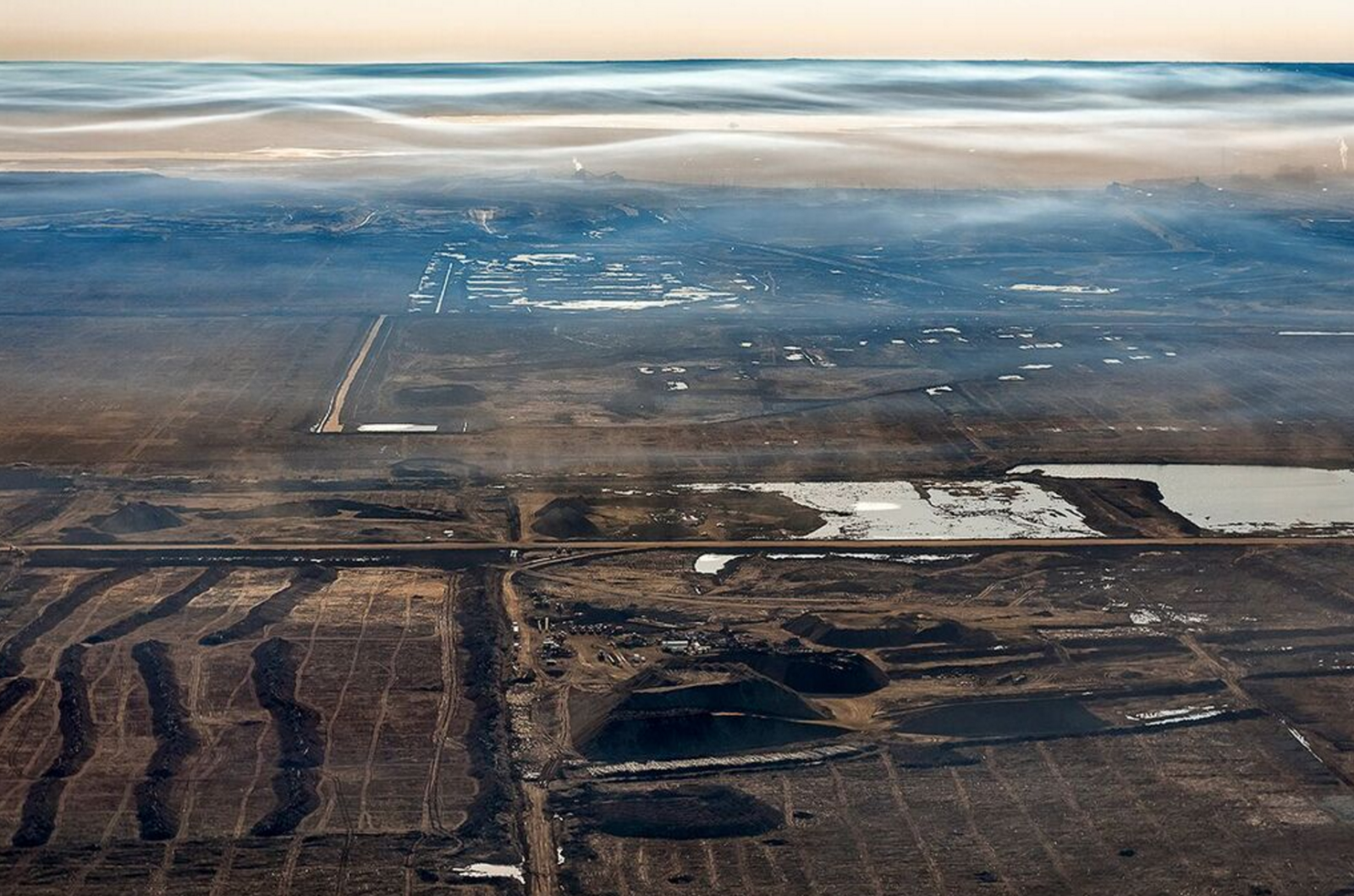 Alberta's oilsands are one of the largest emitters of carbon dioxide in the world. Photo by Andy Wright
Previous story
Next story

A single innovation has helped oilsands company Canadian Natural Resources cut the size of its waste tailings ponds by half, shrink its use of fresh water by a third and save millions of dollars.

The company is now working on expanding the technology it has been using for almost a decade to inject waste carbon dioxide into tailings ponds – the pools of toxic sludge left over after extracting bitumen from the Alberta oilsands.

Adding CO2 helps solid waste settle to the bottom of ponds faster, making it more efficient for recycling the water to extract more oil. The tailings ponds are smaller. Fresh water use is reduced by 30 per cent. Carbon dioxide that would otherwise be vented into the atmosphere is captured.

And it saves money. It costs $50 million to build a single metre of dam for a new tailings pond, so any reduction in pond size means big savings.

That was one example given on Wednesday as Canadian oil industry officials painted a rosy picture of their work to improve environmental performance, making a pitch for new investments from a Bay Street crowd in Toronto.

Canadian Natural was big spender on research and development in 2015

Canadian Natural is one of the largest companies operating in the prairie province, home to the world's third largest reserves of crude oil after Saudi Arabia and Venezuela. But Alberta's tar-like deposits of heavy oil are mixed with sand and buried beneath the boreal forest, cost more to extract and take more energy and water to yield a useful product, making it challenging for Canadian companies to compete on the global market.

Among oil and gas companies, Canadian Natural Resources was the country’s biggest spender on research and development in 2015, and fifth among Canadian companies overall. That research has allowed the company to reduce its overall CO2 emissions by 18.5 million tonnes since 2012, according to Joy Romero, the company’s VP for technology and innovation.

“More and more we’re moving to these things that capture carbon and turn it into something useful,” Romero told National Observer.

Tailings ponds are one of the oilsands' more toxic legacies, and can take years or decades to clean up. As of 2013, extraction operations in the oilsands had produced 976 million cubic metres of tailings stretched over 220 square kilometres, according to the AER.

In 2014, 122 birds died after landing on tailings ponds at three sites in the oilsands, including a Canadian Natural Resources operation. The Alberta Energy Regulator also investigated the company's operation near Cold Lake, Alta. in 2013 after discovering that almost a million litres of bitumen and water had leaked to the surface and contaminated surface water. First Nations and environmentalists said last year that they were concerned that oil continued to seep to the surface, years after the leak was first discovered.

Major Canadian oil companies in Alberta have shed tens of thousands of jobs since the 2014 oil price collapse hammered the provincial economy.

Despite the downturn, Dan Wicklum said these types of investments were steady.

Wicklum is chief executive of Canada's Oilsands Innovation Alliance (COSIA), a consortium of energy companies that share research and technology to reduce environmental impacts in the oilsands. Companies are looking for savings wherever they can, and increasingly realizing that what’s good for the environment can also be good for investors, Wicklum said in Toronto on Wednesday.

“If it made sense to work together five years ago to reduce costs, it makes even more sense now,” said Wicklum, who spoke in Toronto on Wednesday at an investors conference sponsored by the Canadian Association of Petroleum Producers and Scotiabank.

Federal scientists have produced a steady stream of research warning that the oilsands are one of the largest sources of air pollution in North America and the fastest growing source of heat-trapping greenhouse gases in Canada. Last May, some of those scientists published a study in the journal Nature that concluded the oilsands produce as much or more air pollution than the entire Greater Toronto Area, every day.

The Alliance aims to reduce that footprint, and companies' costs, by sharing research and technology that can be used to reduce water use and greenhouse gas emissions. So far, about $1.3 billion worth of research has been shared – and that doesn’t appear to have slowed, despite the oil price crash, Wicklum said.

Greenpeace climate campaigner Keith Stewart said it’s important to reduce the impact of the oilsands, but the eventual goal should be to phase them out entirely.

The Alliance is “trying to make a virtue of necessity,” Stewart said in an email. “Reducing the harms from existing operations is important, but preventing them should be the goal. And that means having a plan to transition to a 100 per cent renewable energy economy.”

Much of the Alliance's work has focused on reducing the impact of tailings ponds, but the association is also focusing on carbon capture and re-use. It has identified 25 finalists for a $20 million prize to fund an innovative project that would turn CO2 into useful products, like concrete. A similar $35 million competition from Emissions Reductions Alberta has drawn submissions that include projects to use waste CO2 to produce toothpaste, fish food or biofuel.

Wicklum, a former scientist and manager from Environment Canada, dismissed concerns that Trump's election would dampen industry efforts to reduce its footprint and costs.

Backing down now would be counterproductive, Wicklum argued, at a time when companies are making progress. “Greenhouse gases are a waste, and there’s a cost associated with that waste,” he said. “Despite the situation in the States right now, the world will change. There will be a post-Trump era.”

Canadian Natural Resources, a member of the Alliance, is working now on a new project to capture its own waste CO2 – instead of buying it from other companies, as they are currently doing – to inject into its tailings ponds.

The company is also working on using waste CO2 to grow algae and use it for fuel. Romero said the company has been able to prove that algae byproducts can be used as fertilizer in oilsands reclamation projects - a huge potential cost saving.

It has has supported Alberta’s carbon pricing model, but is also heavily invested in the oilsands, having just committed $12.75 billion to buy Royal Dutch Shell’s major oilsands operations.

Romero said she’s convinced further technological innovation can make it possible to extract from the oilsands without such a steep environmental cost. “The oil and gas industry can still produce a product and provide it for use without having (a CO2 impact on the climate), both from the actual production through to the consumption,” Romero said.

Goodness gracious National Observer, this reads like the "Who We Are" page from COSIA. Were they handing out goodie bags with pom-poms, logo pens, mini flashlights and USB sticks at the CAPP/Scotia sponsored conference?
Has your independent paper turned into a copy paste format from industrial lobbyists brochures?

If innovation is so fantastic in the oil-sands, why has there been so little reclamation to date? Just one legacy tailings pond and only .116% of mined land is certified reclaimed to date. Why has the AER further deregulated tailings management with Directive 85, permitting even more time, allowances and exceptions for companies to reclaim their tailings ponds?

Why have COSIA members failed to protect the health of residents in the area? More funding is being spent on predator fencing and progress reports for caribou, than ensuring public health and safety. Why is there no appropriate and comprehensive air, water or public health monitoring being performed by their members?

The $1.3 billion COSIA has spent-a good portion of this money was recycled from SGER compliance payments- was offered for fanciful demonstration projects, "road maps", "workflows", "opportunity compilations" and "technology scoring sheets", none of which have solved or mitigated the serious impacts imparted by bitumen extraction and processing. Instead the future liability and risks to the public continues to engorge.

Where is the real story, not the parroted script by COSIA?

A long time ago pirate ships

A long time ago pirate ships filled with gold bullion sunk in the "Bermuda Triangle" when ships sailing suddenly came across methane gas bubbling from the bottom of the sea. Pumping CO2 into water may allow heavy solids to go down due to less surface tension of the water caused by the bubbles. This is the same as the CO2 sequestered in your soft drink; the gas comes to the surface and goes back into the atmosphere. Science, not propaganda is important to sort out fake news when it is offered by industrial gatherings where the storytelling is hard to sort.

I did not have the patience or time to address the numerous and frankly, scientifically ridiculous, pet projects COSIA has dumped hundreds of millions into, such as injecting CO2 in tailings ponds, or using satellites for emissions monitoring. Of course the C02 will be liberated to atmosphere and emissions monitoring should be occurring point source, on the ground and in communities and environments that are impacted. However, this is how industry lobby groups operate, real solutions and appropriate testing and monitoring are intentionally rebuked, industry does not want hard data on public record regarding emissions and contamination. Instead, money is wasted on pie in the sky demonstrations, or satellites for that matter, so that COSIA (on behalf of industry) can persuade shareholders "innovation" is occurring. Meanwhile, the tailings ponds enlarge, the emissions increase, the Athabasca watershed is under continued, unsustainable pressure, the health of communities and wildlife is negatively impacted and the leverage and liabilities escalate.

It's reprehensible that the National Observer is bubbling out the exact sales pitch COSIA uses to gull shareholders into investing. Journalism should not be the stage for storytelling and industrial advertising, but clearly it is here.

This is just another example

This is just another example of "greenwashing" by the oil industry. Innovation and development technology only mean one thing: a hopeful return to profitability . Companies in the Alberta bitumen oil sands are losing money. They have to sell their crude oil at a discount price to U.S. refineries because they are the only ones ( except for smaller refineries in Ontario) which have the capacity to process the large volume of heavy oil coming from western Canada.
Primarily, "new technologies" allowed oil companies to reduce their cost by eliminating jobs (unemployment in Alberta is still high while the oil production is still going up). All the new pipelines approved by the federal government will allow the Alberta bitumen oil sands to expand, leaving workers behind and harming the environment. The legacy of the Alberta bitumen oil sands exploitation is an economic and environmental nightmare that will affect generations to come.