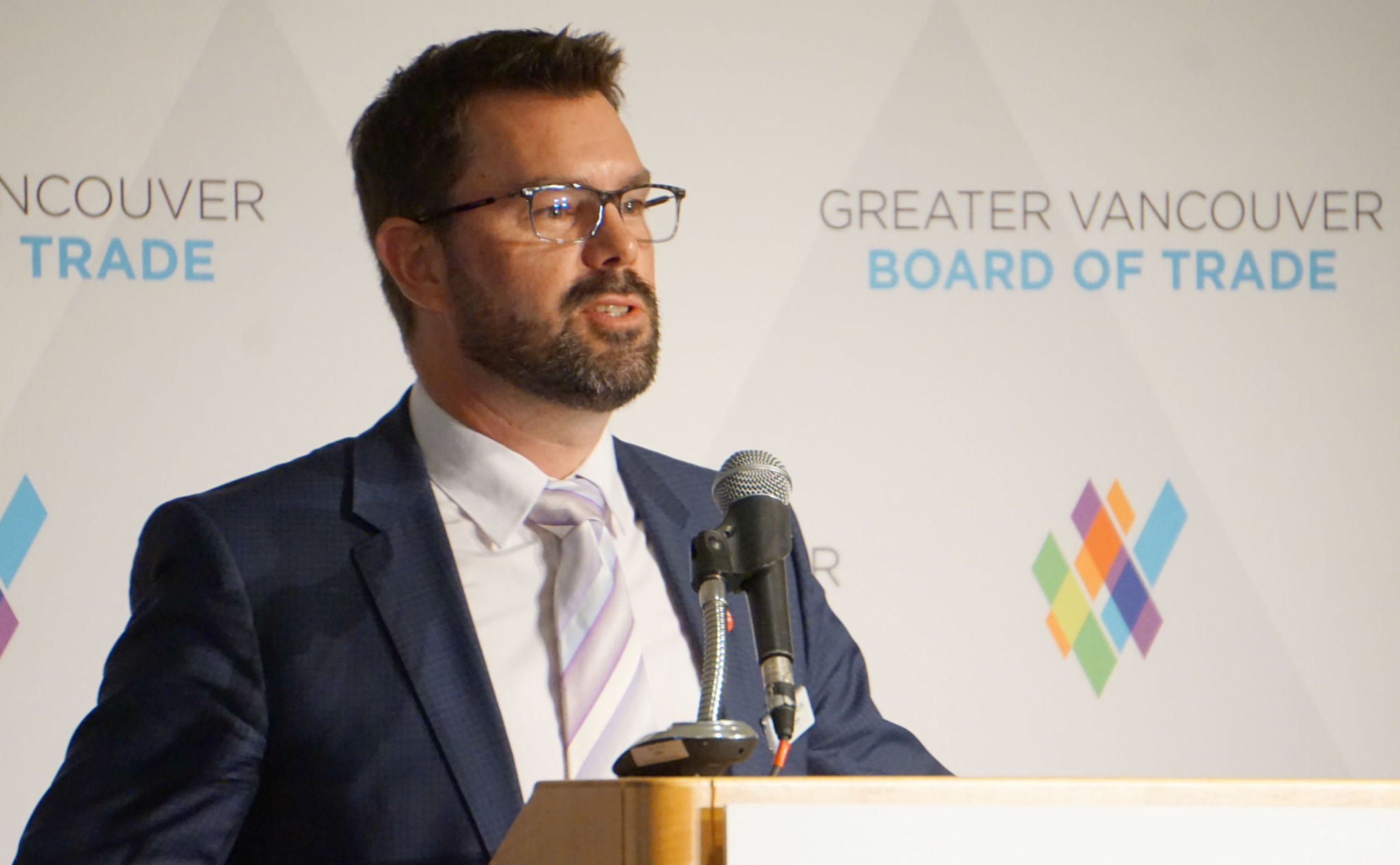 Jeff Gaulin, vice-president of communications for the Canadian Association of Petroleum Producers (CAPP) talks about the future of Canadian energy at a Greater Vancouver Board of Trade meeting on Tues. June 7, 2016. Photo by Elizabeth McSheffrey.
Previous story
Next story

The Canadian Association of Petroleum Producers — the country's largest oil lobby group better known as CAPP — says it's setting its sights on getting at least one pipeline built before 2020, and several more in the coming decades.

The message, brought to a Vancouver business crowd on Tuesday, comes as environmentalists and Indigenous leaders continue to pursue a major campaign against anything that would expand fossil fuels such as oil, gas and coal.

Scientists say that humans need to phase out this form of energy to avoid dramatic changes to the planet's atmosphere, climate and ecosystems. But the lobby group believes it's possible to address Canada's climate change goals while throwing a lifeline to the struggling oilsands industry, which has been hammered over the past couple of years from slumping global oil prices.

“We are serious about action on climate change," CAPP's vice-president of communications told participants in a Greater Vancouver Board of Trade meeting. "We believe that technology and innovation could be Canada’s greatest contribution to combatting climate change.”

In the last 25 years alone, he said the amount of carbon per barrel of Canadian oil has gone down 30 per cent thanks to new clean tech, and the industry is only beginning to tap into clean energy initiatives that would improve its performance further. Canada can build new pipelines, continue to grow the oilsands, and meet its ambitious climate targets, he explained, all through new and emerging green technology.

Canada could be the world's "clean energy supplier"

Despite widespread consensus from environmental groups like Stand, Greenpeace, and the David Suzuki Foundation that Canada cannot meet its international climate targets and build another major pipeline, CAPP — the organization that represents Canada's upstream oil and natural gas industry — steadfastly believes it can be done.

“We can be the clean energy supplier for the world’s future,” he explained. "It will be Canadian resourcefulness that will find a way to get the carbon out of the barrel.”

COSIA's Algae Project, for example, is a pilot program that mixes carbon emissions and waste heat from oilsands facilities with algae, producing biofuel and biomass products that can be used for jet plane fuel, blended into oil, or used for land reclamation and livestock feed. 'Waste heat' is heat generated by fuel combustion or chemical reaction released into the environment as a byproduct of industrial processes. If this technology were applied on a commercial scale, the Algae Project could reduce emissions from oilsands operations between 15 and 30 per cent, and eventually remove 1.5 millions tonnes of carbon emissions — the equivalent of taking 300,000 cars off the road.

COSIA consists of many competing companies that would not normally work together, said Gaulin. But they have set competition aside in the interests of moving the industry forward. Other examples of oilsands innovation include molten carbonate fuel cells that capture carbon dioxide from natural gas-fired processing units while generating electricity, and insulated tubing that reduces heat loss in oil wells.

Yet many of these companies are among those "demonized" by environmentalists and activists — perhaps due to a lack of communication around their efforts, he admitted.

"God bless the scientists and engineers in our industry — they are hard at work but they’re not out telling the story," Gaulin told National Observer. "Maybe we need to do more of a job of demonstrating where we’re going, not just what we’ve achieved.”

And where is the industry going? Hopefully, in the direction of one more pipeline, he added, if not two or three in the next few decades.

Canada needs "at least" one pipeline by 2020

There's no way around it according to CAPP. Canada is the fifth-largest natural gas producer in the world, but with new technology from the U.S. shale revolution — including hydraulic fracking — Canada's biggest customer has now become its biggest competitor.

Alberta needs a way to get its product to markets overseas, said Gaulin, lest it remain a "lemonade stand with one customer."

"There are a lot of pipeline proposals on the table and they don’t have to all happen in one year," he told National Observer, addressing growing environmental and social concerns around projects like Kinder Morgan's Trans Mountain expansion, Enbridge's Northern Gateway project, and TransCanada's Energy East pipeline.

"But to take care of the growth that’s already under construction, we need at least one major oil pipeline by 2020. [Without one] every new barrel of oil... we’ll have to move by rail in the 2020s. We don’t even have the rail capacity to do that, and that would be moving oil through communities with rail road tracks, whereas we can move it more safely with less emissions if we build another pipeline.”

The industry is prepared to embrace the rising cost of carbon in Canada, said Gaulin, including both a cap-and-trade models and carbon pricing (with a slight preference for the latter, he added). In the meantime, he encouraged Canadians to put their pressure on the oil and gas industry in perspective, as the oilsands are not even close to being Canada's largest source of emissions.

“When you look greenhouse gas emissions around Canada, the oilsands only represent 8.5 per cent," he explained. "There are other sectors that need to pull up their socks as well. Buildings are responsible for 12.5 per cent, but we don't see a war on buildings."

CAPP has recently helped circulate a petition that seeks to address this problem by lobbying the federal government for oil and gas support, and changing the dynamic of the oilsands debate to reflect a "more balanced discussion." The industry typically adds $17 billions to government revenue coffers annually, said Gaulin, and that loss in revenue will affect all Canadians, regardless of where they stand on pipeline expansion.

"There’s a hardening, a call for a sharp and costly leap into an uncertain energy future," he explained. “We have to temper all of this with an awareness of the realities — we live in a growing world that will require more energy going into the future.”

And while renewables will certainly play a part in an energy future, he acknowledged, so will clean carbon-neutral oil and gas.

When CAPP quotes 8.5% for "oil" sands carbon output, I get the idea that they are talking about the operations output, not the products output. I could use a little clarity on that.

Hi Stan, thanks for

Hi Stan, thanks for commenting. I am currently seeking clarification from CAPP for you on this statistic and will update you when I have more information!