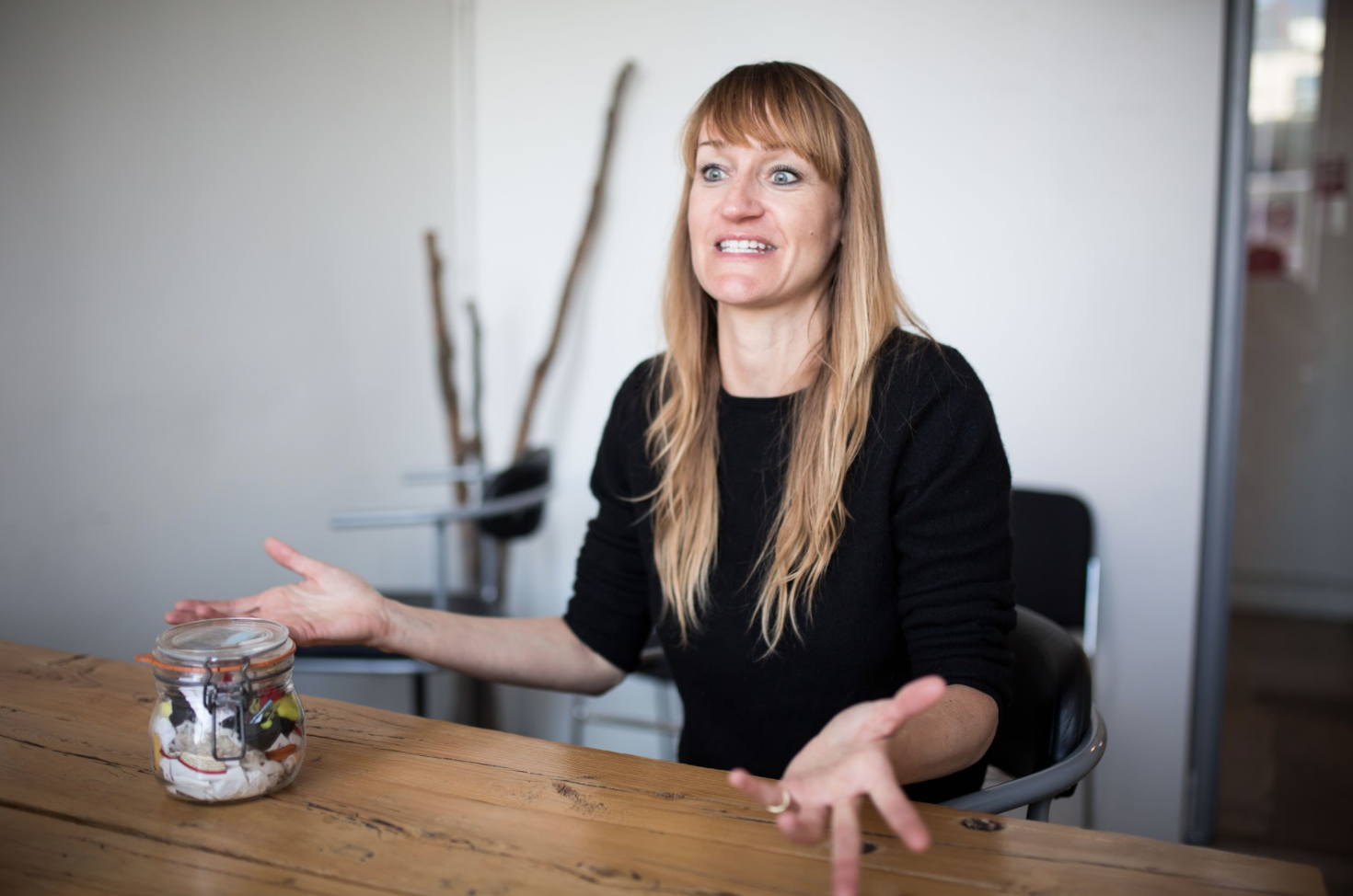 Béa Johnson's hands rest next to the tiny jar of trash her family of four produced in 2016.

It's about the size of a grapefruit and contains the few packaged items she couldn't avoid, compost or recycle last year — clothing tags, caulking from the sink, a single BAND-AID, and plastic from a balloon that floated in from the neighbour's yard.

Apart from what's in the jar, everything else her family purchased, she explains, could be reused, consumed or composted, and came without any packaging.

It hasn't been easy, but Johnson says she made a conscious effort to reduce waste.

That's because every time you buy something, she explains, you cast a vote. Every time you take a free pen at a conference, accept a business card from a stranger, or bring junk mail into your home, you send a message straight to the manufacturers.

"If you buy food that is packaged, that’s a way of saying, ‘I love packaging and I dream of a world that is filled with packaging for our children,’" she tells National Observer. "When you buy, you have the power to support a practice that is either sustainable or not."

Johnson is the author of the best-selling book, Zero Waste Home: The Ultimate Guide to Simplifying Your Life by Reducing Your Waste. The manual has been published in 14 different languages, and in 2010, The New York Times dubbed her 'The Priestess of Waste-Free Living.'

Meet the founder of zero-waste living

It's an apt title given the jar in front of her, the coal on her eye lids (homemade from burnt almonds), and the package-free cocoa powder that tints her cheeks and eyebrows. Even her apparel is secondhand, she explains, and part of a wardrobe consisting of 15 pieces in total and five pairs of shoes.

"There is a reusable alternative on the market for any disposable item," she insists with a smile. "You just need to get used to them and sometimes have a sense of humour getting used to them.”

Johnson is widely credited as the founder of a movement towards zero-waste living at home, and for the hundreds of zero-waste grocery stores, bloggers, and waste-free gurus that have sprouted since her book was published in 2013. She has inspired at least one new permanent, zero-waste shop in Ottawa, slated to open later this year.

Over the last five years, Johnson has travelled around the world to share her experience with others, and answer the fundamental question, 'Just how does she do it?' The France native has presented at the United Nations and European Parliament, and on Tuesday, made her first appearance in Ottawa. Her tour includes several stops in Quebec before she returns to her home in Mill Valley, Calif.

She's here to spread a simple message: You don't need to make everything at home to live a zero-waste lifestyle; change doesn't come over night; and any step towards zero-waste is a step in the right direction.

So, how does Johnson do it?

First and foremost, says Johnson, anyone trying to adopt a zero-waste lifestyle must recognize there's a learning curve. If you take on too much all at once, she explains, you'll likely feel overwhelmed.

"What’s important is really adopting sustainable change — practices that you see yourself doing for the rest of your life," she insists. "I had to test a lot of things. I went through extremes, some crazy stuff.”

When Johnson began her journey in 2008 (fed up with the consumerist, trash-filled ways of the world), she didn't know where to find alternatives to single-use and packaged items. So she started making everything at home — from butter, to bread, to her own version of shampoo. She even washed her hair with baking soda and apple cider vinegar for six months, before realizing she couldn't keep it up.

"I ended up with frizzy ends and didn’t recognize myself,” she laughs. “One night, I went to lay down next to my husband and he looked over and said, ‘I’m just so tired of you smelling like vinaigrette, Béa. It’s really not sexy.’ Then I thought perhaps I went too far.”

Everyone has a comfort level, she says. She still uses toilet paper (compostable), for example, but finds alternatives for other products: Alum stone instead of deodorant and white vinegar for cleaning. Last year, she replaced the foam inside her husband's helmet using felt recycled from old clothing.

"The zero-waste lifestyle has boosted my creativity," she says. "In a way, you feel that you’re cheating the system. It’s finding solutions and alternatives that really excites me.”

Johnson has five rules, summarized in what she calls 'the five Rs': Refuse (all items you do not need), reduce (the items in your possession), reuse (anything and everything you can), recycle (what needs to be recycled), and rot (compost whatever is leftover).

The instructions are on her website, she says, along with a 'Bulk Finder' search app that helps consumers track zero-waste purchasing options in their communities.

Johnson says she's often met with skepticism: Does she have a jar of trash hidden somewhere in her home? What happens when she gets a craving for McDonald's? There can't be an alternative for everything!

She is happy to respond to it.

When you start getting used to a world without TV advertisement, packaged products, and clutter, she says, you simply stop wanting the things you used to have.

“You let go of a certain addiction," she explains. "We no longer have those cravings. It’s like when you start eating less and less sugar, you stop craving sugar. Today, if I have a choice between goose liver and a cookie, I’ll go for the goose liver.”

Johnson has critics. She says she's been criticized for depriving her children, blaming average people for global problems, being "disgusting," and leaving a massive carbon footprint from airplane travel.

She says she can live with the carbon footprint however, as long as her speeches continue to inspire and make a difference, and insists that she only encourages people to explore their options, rather than prescribe a way they should live their lives.

Her sons, ages 15 and 17, have lived longer with a zero-waste lifestyle than without and are completely used to it. Since turning her home into a waste-free zone, Johnson says her family has saved 40 per cent on its annual budget — a pot that has paid for solar panels on the roof, a grey water system that recycles shower water for land irrigation, and world travel.

Her children have ice climbed, snorkeled between two continents, and spent the night in a Mayan village, among many other adventures.

"We’ve discovered a life that is so much richer than the life we had before," she says. "It was tough at first, to find a system that works for us....We’ve replaced a life of having with a life of being. Our money is no longer invested in disposables or things that don’t matter; our money is invested in moments and experiences."

It's an experience she hopes to share with the world, she says — with the exception, perhaps, of washing your hair with apple cider vinegar.

I'm impressed by Johnson's commitment to take responsibility for reducing the many POUNDS of her visible trash.

I'm singularly unimpressed, however, by her lack of commitment in taking responsibility for her many TONNES of invisible trash – the excess climate pollution from her wildly unsustainable travel choices.

Let's look at the numbers involved.

Choosing to fly to another continent -- instead of teleconferencing -- can mean an extra 10 tonnes of climate pollution trash (ex: flying Vancouver to India). Double that to 20 tonnes, or more, if you travel in a premium class. A generous 2C travel budget for Americans and Canadians would be one tonne of CO2 per year. She would need a very large jar indeed to hold all those extra tonnes of climate trash from just one long flight.

Only around 7% of humanity has ever flown anywhere. The rest are too poor to afford to pollute at that level. And research shows that the most climate polluting 10% of humanity (which includes most of us Canadians and Americans) dumps as much climate pollution as the bottom 90% combined. The climate crisis is caused primarily by this small slice of super-polluter folks who can afford to choose safer, less polluting, alternatives but so far are not.

Barry, thanks for the info on

Barry, thanks for the info on flying. As always, you get to the core of an issue and MANY are just delusional about the impact of flying. Buying carbon offsets for these flights from reputable groups would be a starting point. Recycling saves space in dumps, but shipping long distances (sometimes across the globe) and processing create a lot of emissions, plus garbage from what can't be recycled. I don't know if it is less terrible for the planet, but people think recycling cancels out consumption, which it doesn't. Instead of cutting down on waste, people went back to plastic bags and disposable coffee cups. The 4 billion cups sent to Canadian dumps every year would be erased (along with the scandal about Starbucks and Tim Horton's lying about recycling them) if people simply took their own travel mugs. People and companies need to be called out on these behaviours, if things are ever going to change.

I think that may be "kohl" on

I think that may be "kohl" on her eyelids, not "coal"...
https://en.wikipedia.org/wiki/Kohl_(cosmetics)

Feel free to delete this after you fix the typo!