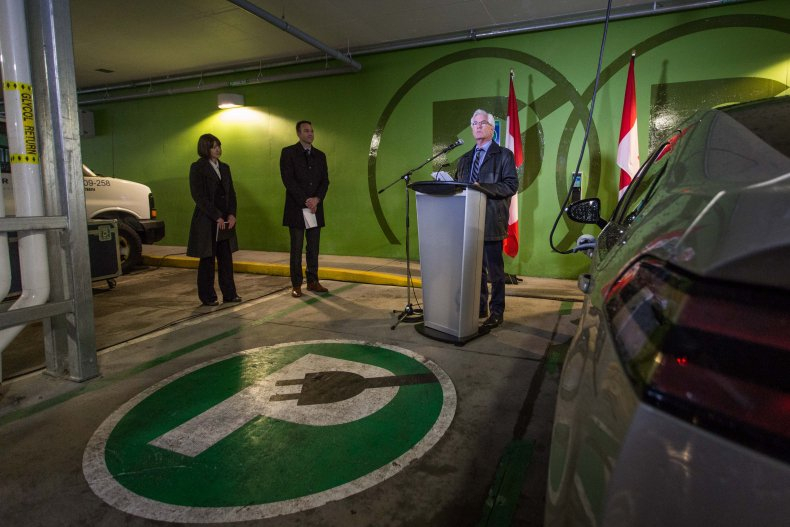 Natural Resources Minister Jim Carr announces an electric vehicle project at the Glebe Parking Garage in Ottawa on April 4, 2017. Earnings are down in the clean tech sector, says a new report. Photo by Alex Tétreault
Previous story
Next story

A giant in Canada's oil patch is admitting climate change will turn its business upside down, but it isn't ready to throw in the towel on oil any time soon.

Calgary-based Suncor Energy made these admissions in a new report examining how climate change will affect its bottom line, noting that new technology and social change will also trigger some dramatic shifts in the market.

The company admits in the document that demand for gasoline will decrease, partly due to hybrids, electric vehicles and fuel efficiency standards playing a larger role.

But Suncor’s April 17 report, “Resilience Through Strategy,” also says oil demand will continue to grow globally in the decades to come, hydrocarbons will continue to be needed and “liquid fuels” will remain the primary fuel source for vehicles.

Suncor describes itself as Canada's leading integrated energy company, with major operations in oil and gas production, refining as well as investments in renewable energy such as wind and solar. As of 2012, the company had about 14,000 employees and it has more than 1,500 retail and wholesale outlets or service stations under the Petro Canada brand.

The document is the result of a shareholder resolution passed at Suncor’s 2016 Annual General Meeting that asked the company to provide “ongoing reporting” on how it was making sure the company could ride out “a future low-carbon economy.”

Suncor’s board and management recommend voting for the proposal, putting out this 2016 document and committing to future ones inside its sustainability reports.

New technology has led to new sources of oil, and changed the dynamics of oil supply around the world, the report states.

"We expect to see a modest decline in demand for gasoline in North America over the next 10 years, accelerating towards 2030,” reads the report.

The energy company suggests three possible future scenarios, each with gradually increasing degrees of oil use:

Suncor thinks the “autonomy” option “best represents the technology and policy context that would be essential” to keep carbon levels to 450 parts-per-million, or in other words a two-degree Celsius increase in global temperatures.

“However, all of our scenarios point to the need for us to continue to aggressively lower costs and carbon intensity throughout our business,” the report states. “This is not only good for the environment but we believe it is also good for business.”

Suncor wants you to know: Oil isn’t going away

Suncor isn’t expecting their core business to disappear any time soon, and rejects the idea of a Canadian electric car revolution.

“As the energy system transitions away from carbon intensive sources of energy,” the report states, “we expect hydrocarbon fuels will continue to be needed to help meet increased global energy demand over the next 50 years.”

Oil demand “will continue to grow to 2040” thanks to population growth, urbanization and higher living standards, the report continues. Oil is expected to “decline” in relation to other energy forms, but will be sticking around, the company says.

Some of that liquid fuel may be natural gas, the report notes. Suncor has holdings in British Columbia’s Montney shale gas field.

Suncor’s lack of faith in an electric car revolution comes as another report concludes that Canada’s clean tech sector is “awash in red ink,” despite the best efforts of governments.

While the Trudeau government has put down $120 million over 11 years to create infrastructure in part for electric vehicle charging, and Natural Resources Minister Jim Carr promotes EVs in parking lots, Ottawa-based Analytica Advisors says the industry isn’t profitable and shareholder returns are low.

“Despite unprecedented interest and engagement from provincial and federal governments, Canada’s low-carbon renaissance is very much on the ropes,” the report reads.

Retained earnings are down each year for the past five years, the report adds, and clean tech firms and their intellectual property are "vulnerable to foreign takeovers.”

Analytica’s 2017 Canadian Clean Technology Report examined Canadian companies and organizations in the clean tech sector. Its conclusion: new policy is needed to unleash the floodgates of private finance and lock down new innovations.

As well, new firms are popping out of the ground like spring flowers: the industry has more companies than either the aerospace sector or the automotive sector.

There are over 850 clean tech companies, the report notes, operating in 10 sectors and "every region of the country" compared to 700 aerospace firms and 450 automotive firms.

fantastic post, very informative. I'm wondering why the other experts
of this sector do not understand this. You must proceed your writing.
I am confident, you have a huge readers' base already!

I love what you guys are up

I love what you guys are up too. Such clever work and reporting!

Greate pieces. Keep posting such kind of information on your blog.
Im really impressed by your blog.
Hey there, You have performed a great job. I'll certainly digg it and
in my opinion suggest to my friends. I am sure they'll be benefited from this site.

Sounds like Suncor still thinks the earth is flat.
Suncor feigns concern about the environment, while it's pipeline company, Trans-Northern, continues to abrogate its responsibility to follow safety orders from the NEB, and has also failed to clean up numerous contaminated sites where their pipeline has leaked, leaving the landowners with liabilities and worthless properties.

Only when Suncor assumes a responsible, respectful, and pro-active corporate culture will its business generate any respect for its profits that aren't made off the backs of disrespected landowners and the disregard of its regulator.