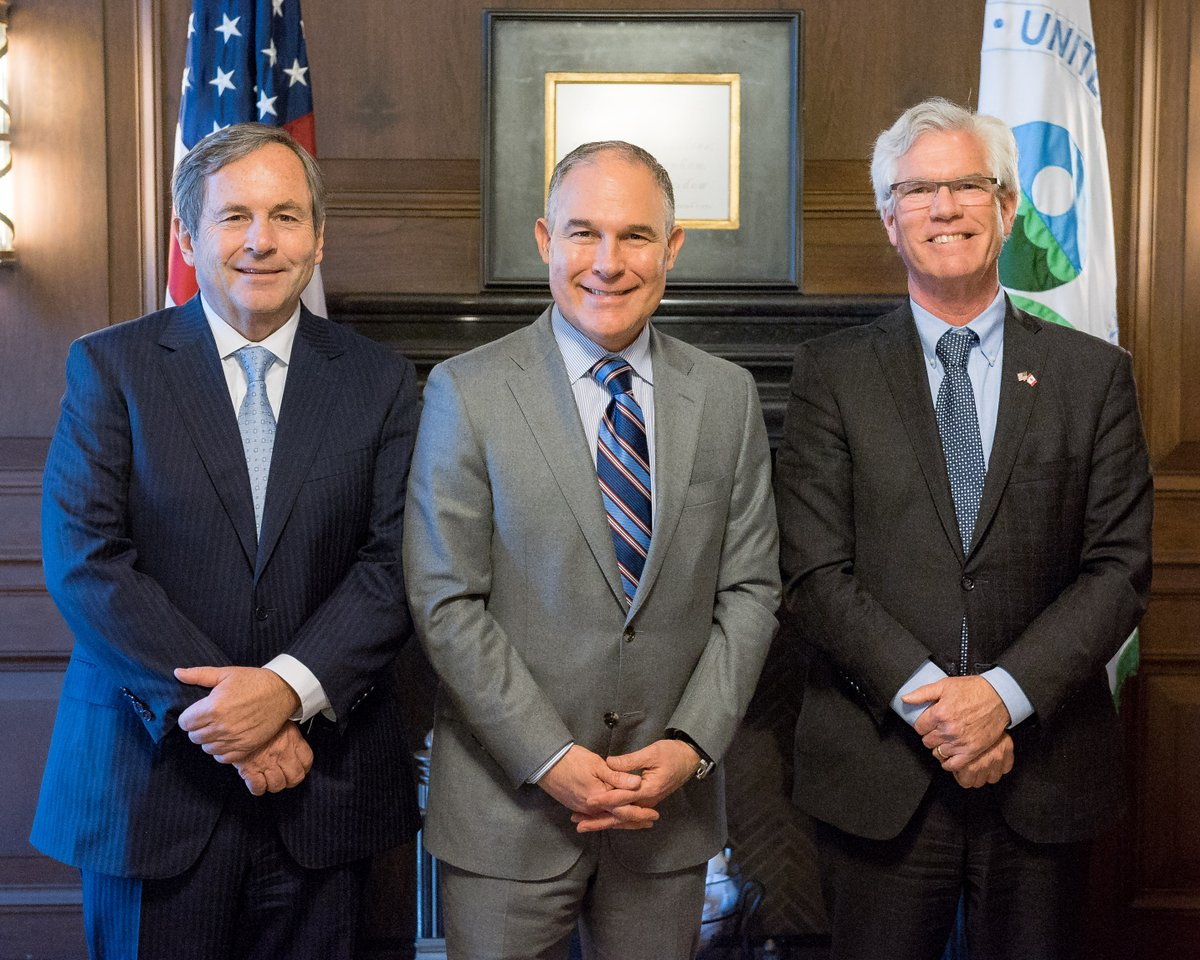 Two of the world’s largest oil companies sold off billions of dollars of assets in Alberta's oil patch this month, and Canadian firms have snapped up the offerings. On March 9, Royal Dutch Shell plc divested $7.25 billion USD of its oilsands interests in large part to Canadian Natural Resources Limited. On Wednesday, ConocoPhillips sold most of its Canadian assets to Calgary-based Cenovus Energy in a $17.7 billion arrangement.

The mega-deals, coupled with the news that another giant, Exxon, removed billions of barrels of oil off their books for the time being, has led to questions about the region's future. But Carr, speaking to reporters on a trip to Washington, D.C., played down the significance.

“These are market decisions," he said. "Clearly there’s some consolidation, and that Canadian investors are seeing opportunity in the oil sands. We don’t think that these trends indicate anything other than long-term confidence in the investment."

Carr said the recent transactions demonstrate that "Canadian investors are particularly interested—and that’s fine, and the market ultimately will make these decisions."

"So we think that this is another example of how decisions are made by companies looking at the long-term, and I would take from that that Canadian investment is giving a vote of confidence in the long-term of Alberta investments."

Carr was in D.C. to speak with the Trump administration, the United States Congress and union and industry representatives. He met with U.S. Energy Secretary Rick Perry for the first time in person, as well as Environmental Protection Agency administrator Scott Pruitt and groups including the American Petroleum Institute.

In a speech at the U.S. Chamber of Commerce’s Institute for 21st Century Energy on March 29, Carr discussed the interconnectedness of the Canada and U.S. economies.

The Trudeau Liberals are trying to strike a balance between the environment and the economy by introducing carbon pricing and strengthening green investments and environmental monitoring on the one hand, and helping develop, sell and market Canadian fossil fuels on the other.

While some in the environmental movement are happy that the government has been publicly defending the Paris climate change agreements, especially after the Trump administration's moves to roll back environmental measures, they also wonder if Prime Minister Justin Trudeau's government is striking the right balance.

Carr attempted to hit that sweet spot again this week. He said he used the example of Trudeau's approval of the Kinder Morgan Trans Mountain and Enbridge Line 3 pipelines, along with his government's $1.5 billion marine safety plan and its promise to “co-develop” environmental monitoring committees with Indigenous communities, to promote “the importance of environmental stewardship along with economic growth."

His office confirmed to National Observer that his comments linking the oceans plan with the pipeline approvals was part of a deliberate approach to “make responsible decisions about the energy we use and how we move it safely to the global marketplace.”

“The government of Canada is committed to safe, clean, and efficient marine transportation to get Canadian resources to market,” Carr's spokesman Alexandre Deslongchamps said in an email.

“By taking concrete measures to improve marine safety and responsible shipping, the government of Canada is building a strong, safe, resilient transportation system that will help move Canadian products, including our natural resources to global markets and in the process, improve economic prospects for the middle class."

But as Carr was in Washington, protests erupted outside a TD meeting in Toronto on Thursday over the bank’s financial ties to Kinder Morgan.

Catherine Abreu, executive director of Climate Action Network Canada, said she believed there was "genuine commitment" in the Trudeau government to the Paris agreements and the effort to transition the economy to clean energy. Environment Minister Catherine McKenna, she pointed out, also met with Pruitt in Washington this month.

"But there's a potentially contradictory message being spun that you can somehow carry out these commitments to genuine climate leadership, while continuing to exploit the fossil fuel reserves that we have, and to export those fossil fuels to the world," she said.

"That contradiction is an uncomfortable element to Canada's current approach to climate change."

The Liberals have promised tens of billions of dollars for green infrastructure, spread out over a decade. It has also made a $2-billion commitment to a low-carbon economy fund, spread out over five years. Meanwhile, clean energy investment in Canada was down for the second year in a row last year, according to Clean Energy Canada.

“An economy that is based upon expanding the extraction and export of fossil fuels is not a sustainable one and is not a responsible one.”

By Carl Meyer | News, Energy | March 3rd 2017
Reports from the Race to a Safer World

The crude oil carried by the

The crude oil carried by the Kinder Morgan Trans Mountain pipeline will end up being process by refineries on the U.S. West Coast (as it is right now). Despite the fact that Canadian oil producers can export their crude to foreign countries through American port facilities (Globe & Mail, Apr. 20, 2015: "Canadian crude shipments from U.S. Gulf hitting global markets"), Canadian shipments of crude oil to the rest of the world accounted for only 0.8% of total exports in 2015 (NEB Market Snapshot, Apr. 22 2016: "Canadian crude oil exports hit record in 2015 led by higher deliveries to the U.S. Gulf Coast"). According to the National Energy Board (2015-Q3) report on "Estimated Canadian Crude Oil Exports by Type and Destination", only 28,550 b/d of conventional light (no conventional medium, conventional heavy, synthetic, or bitumen and blended bitumen) were exported to countries other than the U.S. On the other hand, exports to the U.S. reached an average of 3,045,862 b/d during the same period.
Traders said the price of Canadian crude shipped to Asia needs to be low enough to offset the cost of shipping across the Pacific on smaller vessels. The largest-sized oil tanker that can dock in Vancouver is an Aframax, which can carry between 500,000 and 700,000 barrels. Vessels at the port can only be loaded up to 80% capacity due to depth and other restrictions, meaning a vessel can only be filled to around 550,000 barrels. That's a stark contrast to the one million barrel Suezmaxes, or the two million barrel very large crude carriers (VLCCs) commonly found in Iraq or Singapore (Asian refiners prefer Iraqi crude due to lower acidity).
(http://gulfnews.com/business/sectors/energy/canada-oil-sands-asia-export...)
Exporting more crude oil through the port of Vancouver is risky, and will increase noise and air pollution (oil tankers burn the cheapest bunker oil). The need to build pipelines to reach tidewater with the goal of exporting Canadian heavy crude oil to foreign countries doesn't hold water.

Hmmm, a number of thoughts

Hmmm, a number of thoughts travelling through my mind as I read these statements from the Trudeau Liberal Party. Short sighted goals possibly arising from a lack of understanding of the elephant in the room (environment) may be at the basis of the irresponsible actions this party is taking with our country. This after so many campaign promises to make changes to government priorities and actions.

“By taking concrete measures to improve marine safety and responsible shipping, the government of Canada is building a strong, safe, resilient transportation system that will help move Canadian products, including our natural resources to global markets and in the process, improve economic prospects for the middle class."

Marine safety and responsible shipping seem oxymoron to anyone who is aware of the innumerable (often not reported) leaks, in pipelines and the consequences for just one tanker spill. These accidents are not fixable. There are no remedies to the earth and ocean once these contaminants are introduced. Some of the contaminants can be scooped up but the majority of the contaminants remain where the spills occurred for decades if not centuries. World class clean-up response is only a political phrase, as known technologies to clean up spills wherever they occur are completely inadequate. Until we can fix any problems we must not play with this set of matches.

"The Trudeau Liberals are trying to strike a balance between the environment and the economy by introducing carbon pricing and strengthening green investments and environmental monitoring on the one hand, and helping develop, sell and market Canadian fossil fuels on the other."

We know the majority of fossil fuels need to be left in the ground if there is to be an habitable planet in the future, for most of the creatures currently living on Earth. Thus the statement of striking a balance, seems analogous to striking a balance between dope dealers need to make money and the devastation of the opioid calamity on our citizens. There is no need for a balance, there is a need for priorities and actions that come from those priorities.

Politicians need to understand that their citizens are here for the long haul. Currently all governments seem to cascaded into the future any actions to solve major problems, while often continuing actions that created the problems in the first place. Government policies and actions need to focus on creating a livable future which has to start with the environment. Ask a homeless person how much they worry about storage problems. Without a place to live most everything else takes a back seat. Yes, once we have secured actions needed for a habitable planet, we need to have an economy, social justice and democracy that will enhance individual lives. Interestingly, the actions needed for the economy complement then needs of the environment. Creating grants for solar on homes, for individuals creating their own businesses to service the green economy put money into areas outside of the great urban centers. This then also creates social justice (housing is not as expensive outside of big urban areas). The democracy security is another topic.

We have the knowledge and skill to do what is needed. Unfortunately as usual, no political will.