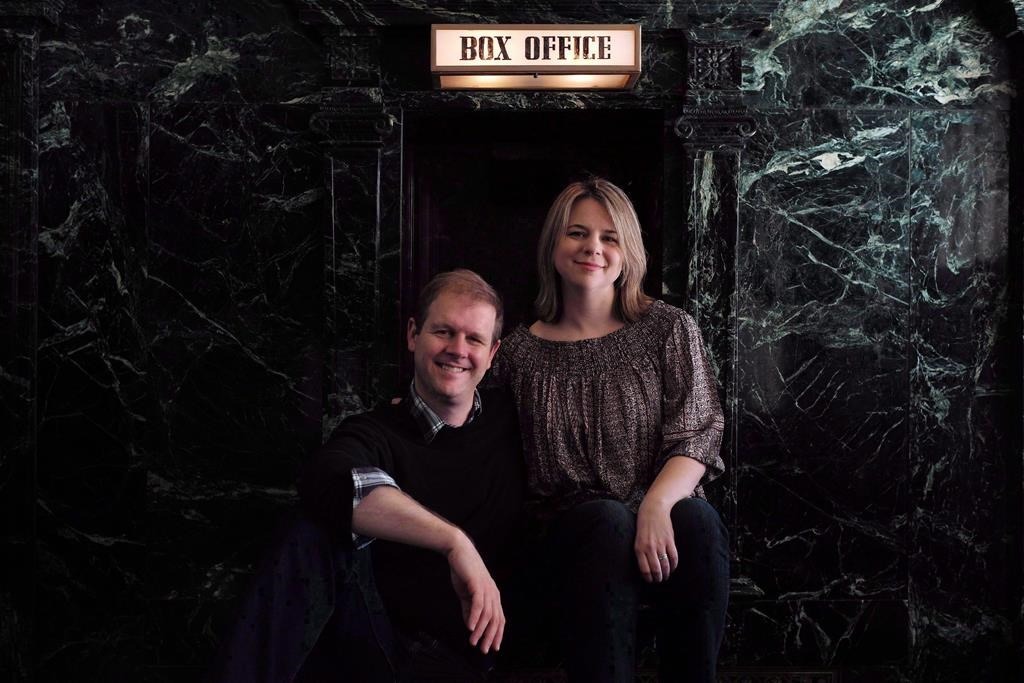 Writers Irene Sankoff and David Heinas are photographed in Toronto's Royal Alexandra Theatre at as they promote the production "Come From Away" on Nov. 11, 2016. File photo by The Canadian Press/Chris Young
Previous story

Made-in-Canada "Come From Away" is being touted as one of the best shows on Broadway, with the Tony Awards nominating the feel-good theatrical production on Tuesday in seven categories, including best musical.

Married Canadian co-creators David Hein and Irene Sankoff received two of the show's nominations, with nods for best book and best score of a musical.

"I did a sort of fist pump in the air. I was just so proud," said Toronto-native Sankoff in a phone interview from New York. "I felt like I was at a sporting event and we scored the first goal.

"I'm not a sports person, but it felt like we were really in the game," added Sankoff, as Regina-born, Saskatoon-raised Hein laughed in the background.

Jenn Colella is in contention for best actress in a featured role in a musical for her portrayal of real-life retired airline Capt. Beverley Bass.

"I figured by the sheer number of texts coming in that something good must have happened for me," said Colella of how she heard the news.

Other "Come From Away" nominations include Christopher Ashley for best musical director, Howell Binkley for best lighting design in a musical, and Kelly Devine for best choreography in a musical.

"Come From Away" is set in the remote East Coast town of Gander, N.L., during the aftermath of the Sept. 11 attacks.

Gander's population doubled as it sheltered 6,579 passengers and crew from 38 planes diverted when U.S. air space was closed on Sept. 11, 2001.

Sankoff and Hein travelled to Gander for the 10th anniversary of the 9/11 attacks. They spent a month in Gander gathering true-life tales of humour, hospitality and heroism from locals that they later translated into their theatrical work.

"We said it on opening night when this New York audience gave a standing ovation to the people from Gander and the Come From Aways that we interviewed. We're so honoured to be telling this story and having the story recognized," said Hein. "What they did — it's just such an honour to be sharing it and to be having that recognized.

There was little time to celebrate as "Come From Away" prepares for another show later on Tuesday. But Hein said they planned to acknowledge the prestigious honour with fellow cast and crew and the audience.

"Come From Away" earned mostly rave reviews when the production made its Broadway debut in March. Prior to its arrival in New York, the musical was staged in La Jolla, Calif., Washington, D.C., Seattle and Toronto. The "Come From Away" cast was also in Gander for two concerts last October as a fundraiser for local charities.

"Come From Away" has had its fair share of high-profile attendees in the audience since its Broadway opening. Prime Minister Justin Trudeau and his wife Sophie Gregoire Trudeau, former prime minister Jean Chretien, actor Hugh Jackman, actress-model Brooke Shields and supermodel Cindy Crawford are among the famous theatregoers who have visited the Great White Way to take in the show.

Prior to Tuesday's Tony nominations, the homegrown production was already receiving plenty of recognition from critics within and beyond the Big Apple.

The show has received a slew of theatre nominations from the Drama League Awards, Drama Desk Awards, the Outer Critics Circle Awards and the Chita Rivera Awards.

The show also received 14 nominations from the Helen Hayes Awards, which celebrate excellence in professional theatre throughout the Washington metropolitan area.

— By Lauren La Rose in Toronto