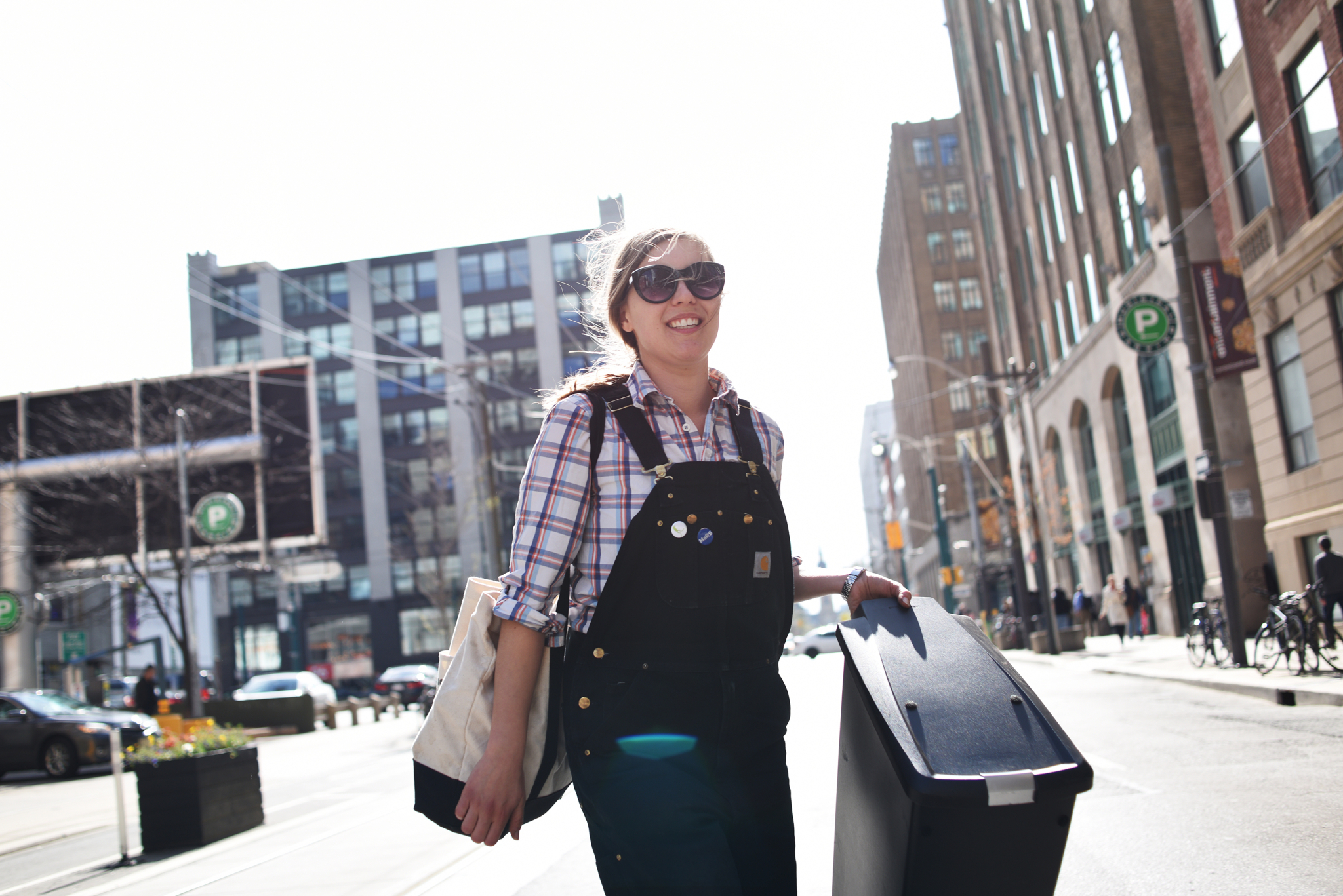 Jocelyn Molyneux wants Ontarians to stop dumping their organic waste in landfills – and she has a quarter million (and counting) ways to do it.

At her Caledon, Ont.-based farm, 250,000 red wiggler worms are busy transforming the organic waste of 15 Toronto-area companies into nutrient-rich manure, diverting it from methane-producing landfills.

Her plan is to reduce the estimated 4.2 million tonnes of organic waste generated in Ontario every year, most of which ends up in landfills.

“I’m trying to combat this out-of-sight, out-of-mind mentality that we have about garbage,” Molyneux said. “Get rid of the word waste altogether. Just call it a resource, and figure out who can use this resource.”

Jocelyn Molyneux wants to expand her worm farm and start taking a bigger bite out of Ontario's organic waste. Video by Riley Sparks.

After graduating from Ryerson with a master’s in applied environmental science, she started composting with just 500 red wiggler worms. Four years later, they’ve grown to 250,000, producing about 50 pounds of worm manure – or castings – every week from the bins of food waste Molyneux collects from Wastenot Farms’ 15 clients in the Toronto area.

“When I’m in there working or feeding them or collecting the worm castings, I always leave with a real sense of wonder,” she said. “They’re my babies. I don’t name each one, because it would be hard to keep track.”

Red wigglers have a voracious appetite for two things: eating, and making more worms. A pound of worms - about 500 - can eat a pound of food waste every day, and their population doubles in about six months. “The tech scales itself,” Molyneux said.

Worms are especially well suited for post-consumer food waste because they’re not bothered by bits of plastic and other inedible trash – they just eat around it. Their manure, also called castings, is a dark-brown soil-like substance full of nutrients that can be used as a natural fertilizer.

Most composting companies make money by charging tipping fees – the amount paid per truckload dumped. The worms flip that around. Wastenot Farms charges a weekly fee to pick up food waste, then resells most of the resulting castings. Clients also get back 25 per cent of the worm castings generated from their food waste. Several of her clients donate their castings to help fertilize community gardens. Castings produced by food waste from green energy company Bullfrog Power's downtown Toronto office were used last fall to fertilize a community garden in Parkdale.

Her first attempt with a commercial client wasn’t a complete success. The Ontario Natural Food Co-op, where she installed an in-office worm composting system, liked the idea, but quickly found their office full of flies. She moved the worms to a small plot on a farm in Caledon, Ont., an hour’s drive from Toronto.

Today, the worm food comes from clients all over the Toronto area: a downtown law firm, Velcro Canada’s manufacturing plant in Brampton and a 200-person property management company in Scarborough.

Bullfrog Power is one of her oldest clients. Molyneux stops by the company’s downtown office every week to pick up food waste from two green bins, which sit next to an aquapomics system that uses waste generated by tilapia fish to grow vegetables, which in turn feed the fish.

Bullfrog Energy VP John Wilson told National Observer that cutting down on food waste will go a long way toward reducing greenhouse gas emissions. “A big part of what we want to do is work with companies like Wastenot and other food companies to close the loop," Wilson said.

It’s a good start, Molyneux said, but 15 clients is “not a drop in the bucket.” Each Ontarian throws out an average of about 300 kilograms of organic waste every year. Of about 12.5 million tonnes of waste produced in the province annually, about a third is organic waste – stuff that Molyneux’s worms would happily eat.

In 2004, the provincial government set a goal of reducing the amount of waste going to landfills by 60 per cent. Within a few years, many of Ontario’s largest municipalities introduced green bins to collect compostable food waste.

According to the Ontario government, an increase of 10 percentage points in the amount of organic waste diverted from landfills would be equivalent to taking about 64,000 cars off the road each year.

Currently, about a quarter of Ontario’s waste is driven to Michigan or New York, which adds exhaust emissions. About 16 per cent of all waste dumped in Michigan landfills comes from Ontario.

On top of that, the waste itself also produces methane as it decomposes. According to the federal government, landfills account for about 20 per cent of Canada’s methane emissions – the equivalent of about 30 megatonnes of carbon dioxide in 2015. In Ontario, the amount of greenhouse gases produced by landfills in the province increased by 25 per cent between 1990 and 2012.

But for businesses who contract to private companies to remove their garbage, the market rules: it’s almost always cheaper to just trash everything than compost it, which means that most companies dump everything – plastic bags, banana peels, coffee grounds and all – into one load and pay for someone to haul it to a landfill.

For companies who pay for waste disposal by weight, composting can save money because bags without food waste are lighter, and also don’t smell, requiring fewer pickups. But for many offices, garbage removal is included in the cost of renting the space, so composting is an extra cost.

“When it comes to garbage, it comes down to price. People want to support our service and do the right thing and feel good about it, but only if it costs the same as the other guy,” Molyneux said.

That made for a tough sell when she started: “I was trying to offer them a solution for which they did not have a problem – and I was trying to charge them for it.”

But that’s changing, she said, as more companies like Velcro Canada—whose Brampton, Ont. plant is almost entirely waste-free—try to reduce their footprints: “There’s a stronger realization than there was even three or four years ago that we have to be doing whatever we can,” Molyneux said.

Ontario is developing tougher waste guidelines that will eventually ban food waste from landfills. The new rules would aim to pressure private companies to find ways to reduce their waste output, just like Ontario municipalities a decade ago.

A low-interest $10,000 loan from Futurpreneur, a non-profit that helps small businesses get off the ground, helped Molyneux expand. Futurpreneur received a $14 million investment over two years in Finance Minister Bill Morneau's 2017 budget.

But like agriculture, profitability in waste management is all about scale, Molyneux said.

Right now, the tech is just at a demonstration scale, she said. Now that she has proved the technology works, she’s looking for investors to help the business scale up and eventually move closer to the city, where she imagines “millions upon millions” of worms quietly munching away on Toronto’s garbage, right where it’s produced.

Editor's note: This article was updated at 10 a.m. ET with information about the federal budget's 2017 investment in Futurpreneur.