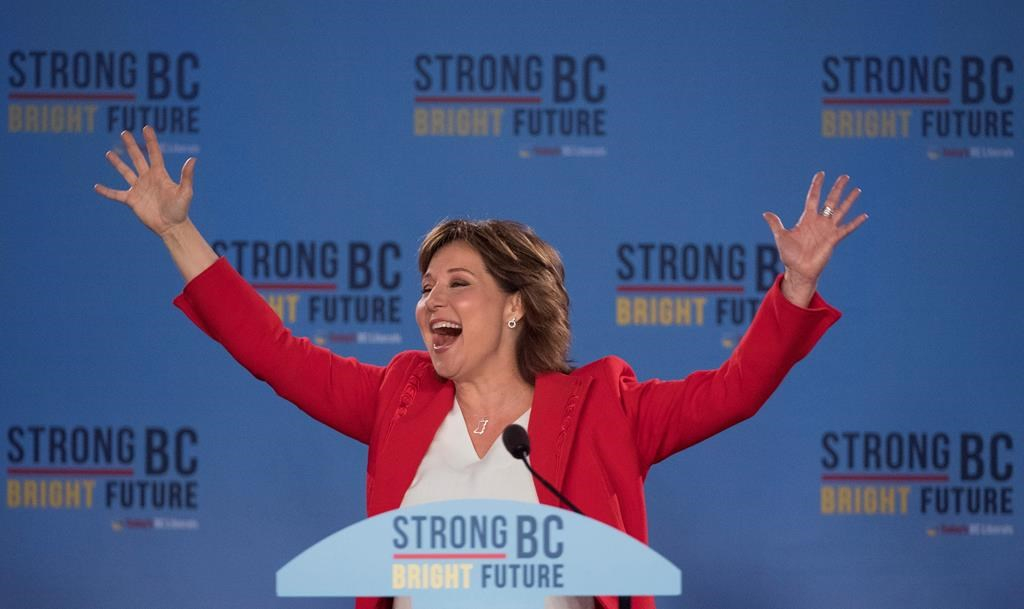 BC Liberal Leader Christy Clark speaks to supporters at a post-election rally May 9 in Vancouver. Photo by Canadian Press
Previous story

The Green Party won enough seats to hold the balance of power after Tuesday's election, but risks ruin by backing the New Democratic Party, say political scientists from the University of British Columbia.

The province’s lieutenant-governor asked BC Liberal Leader Christy Clark to continue as premier with a minority of 43 seats Wednesday.

The BC NDP under John Horgan took 41 seats and the Greens led by Andrew Weaver picked up three seats - more than ever before. The Greens now hold the balance of power in the 87-seat legislature.

The final election results won’t be known for at least two weeks when tens of thousands of absentee ballots are counted. A recount is ensured in the riding of Courtney-Comox on Vancouver Island because the NDP is hanging on by only nine votes. A Liberal win there would push the government to 44 seats in the legisature, the smallest possible majority.

If the NDP keeps the riding, a deal with the Green Party could create a coalition with 44 seats.

“If it’s true that British Columbians voted for a change, that must mean — if you’re Andrew Weaver — ousting Christy Clark from government,” said UBC’s Richard Johnston.

“But to do that, he has to back the loser,” said Johnston. “Andrew Weaver has to stick-handle through this very carefully. He may have the effect of delegitimating his own party and the NDP by putting them in power."

The Greens doubled their popular vote from eight per cent in 2013 to 16 per cent Tuesday, said Kathryn Harrison of UBC. Her riding-by-riding look at the shift indicates it hurt the Liberals more often than the NDP.

The Liberals took 40.9 per cent of the popular vote compared to the NDP's 39.9 per cent.

“There were three cases where the Greens seems to have directly or indirectly hurt the NDP,” said Harrison. Greens won two former NDP ridings and helped a Liberal to win in a third by siphoning off NDP votes, she said.

“But in eight other ridings, the increase in the Green vote share came disproportionately from the Liberals share and allowed the NDP to win when they arguably wouldn't have otherwise.

“The NDP would have done worse in this election if it were not for the Green vote,” said Harrison.

NDP Leader Horgan reached out to Green voters in his election night speech, mentioning issues that resonate with both parties.

"It could be a disaster"

The most significant gain the Green Party could make is to push through proportional representation by uniting with the NDP, said Harrison and Johnston, both political science professors and researchers.

“The big win for the Green Party is electoral reform because small parties like the Greens are forever disadvantaged by a first-past-the-post system. That would be a long-term win for them so that’s one they may be willing to risk in supporting the NDP,” said Harrison.

“It could be a disaster,” said Johnston about the immense difficulties in changing the way a province votes, “but if they can pull it off it would transform B.C. politics.”

Harrison said it is not clear, with the Liberals still in power, how the Green Party can achieve its goals of stopping the Site C hydroelectric dam in northern B.C. and the Kinder Morgan Trans Mountain pipeline expansion from Alberta to Metro Vancouver.

If the NDP had Green support to form a government it could possibly order more environmental or health assessments on the pipeline which would postpone the start of construction.

“That kind of delay when oil prices are low and the project is financially questionable may be enough to kill the project, but it does have federal approval,” said Harrison.

Minister of Environment and Climate Change Catherine McKenna told reporters in Ottawa Wednesday she looks forward to working with any party that forms the government.

“We are waiting for the outcome of the results from the British Columbia election, and we will work with whatever – whichever – whoever forms government, and our priority is getting it right when it comes to the environment and the economy.”

Even though a majority of British Columbians voted for parties that oppose the pipeline, McKenna said the federal government is sticking by its support for twinning the Trans Mountain pipeline.