By Colette Derworiz | News, Energy, Politics | May 18th 2017
#3 of 14 articles from the Special Report: Legacy of liabilities 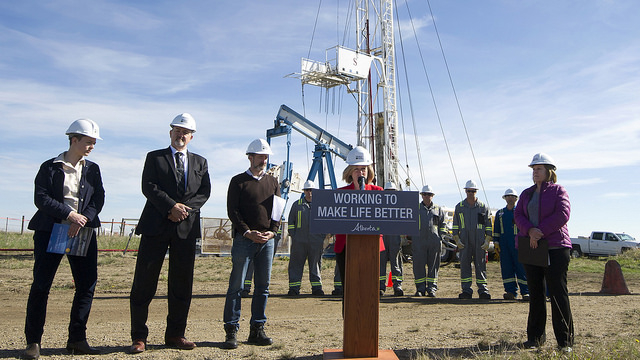 Alberta Premier Rachel Notley and Energy Minister Margaret McCuaig-Boyd announce a loan for the cleanup of orphaned oil and gas wells near Carstairs, Alta. on May 18, 2017. Handout photo from the Government of Alberta
Previous story
Next story

A $235-million loan to industry from the Alberta government will accelerate the cleanup of orphaned oil and gas wells across the province and get hundreds of people back to work in the next three years, says Premier Rachel Notley.

The announcement, made at the site of an orphaned well near Carstairs, Alta. attempts to address both environmental and economic issues with the old energy sites in Alberta.

“The number of orphaned wells in Alberta is a growing problem, a problem that has been made much worse by the collapse in oil prices,” Notley said Thursday. “We’re here today to help fix the growing orphaned well problem and create good jobs for Albertans at the same time.”

The loan, financed with a $30-million commitment from the federal government, is expected to create 1,650 new jobs in the province over the next three years. It will be paid back in the next 10 years by the Orphan Well Association, an industry-funded group that currently dedicates $30 million annually to clean up old wells.

There are almost 450,000 oil and gas wells across Alberta, with nearly a third now considered ‘abandoned’ or ‘inactive’ by industry.

Orphaned wells, which are no longer producing and haven’t been properly sealed, are the biggest concern because they no longer have a company responsible for them and could pollute groundwater and soil.

“Our industry has experienced one of the most profound downturns in decades and continues to experience the fallout of the Redwater legal decision,” said Brad Herald, chair of the association. “This repayable loan will further help to accelerate the abandonment and reclamation of orphan wells in Alberta.”

The court decision in the case of a bankrupt Redwater Energy Corp. gave secured creditors priority over environmental cleanup of orphaned wells.

Notley noted that the group had already agreed to double their annual contribution to $60 million, starting in 2019, so that money will instead be used to pay back the province’s loan.

“It allows us to do it at a time when the costs are lower and people are looking for the work,” she explained.

The Petroleum Services Association of Canada (PSAC), which originally proposed the idea to get unemployed oil and gas workers back on the job, said it’s a good move.

“We applaud the Government of Alberta for leveraging the federal funds to allow a greater number of sites to be decommissioned sooner rather than later, thereby creating more jobs” said Mark Salkeld, president and chief executive officer of PSAC.

It was also welcomed on the environmental front.

“These orphaned wells pose a significant environmental risk,” said Nikki Way, an analyst with the Pembina Institute who noted there are currently 2,084 orphaned wells.

Last week, the province announced that it would work with industry and others to find ways to better protect Albertans and the environment by improving the policies for the management of old oil and gas facilities.

Way said the Pembina Institute is encouraged by the province’s “parallel efforts to review and reform the existing, inadequate rules to address the root causes of orphaned wells in the first place.

“We’re hopeful that this effort will ensure that these liabilities don’t continue to grow and these wells are reclaimed before they become orphaned,” she added.

Notley said those issues will be addressed in an ongoing review of the issue, but suggested the loan is a good start.

“It’s a win for landowners, a win for our environment, a win for industry and a win for thousands of Albertans who will benefit from the good jobs that we are creating,” she said.

Notley added that it’s clear there’s a big liability — pegged at $30.5 billion by the Alberta Energy Regulator — with the old wells.

“There’s no getting by that,” she said. “The question is how do we get a handle on that in a way that is balanced and responsible. We look forward to making progress on that.”