Trudeau praises benefit of sharing intelligence with the U.S. and others 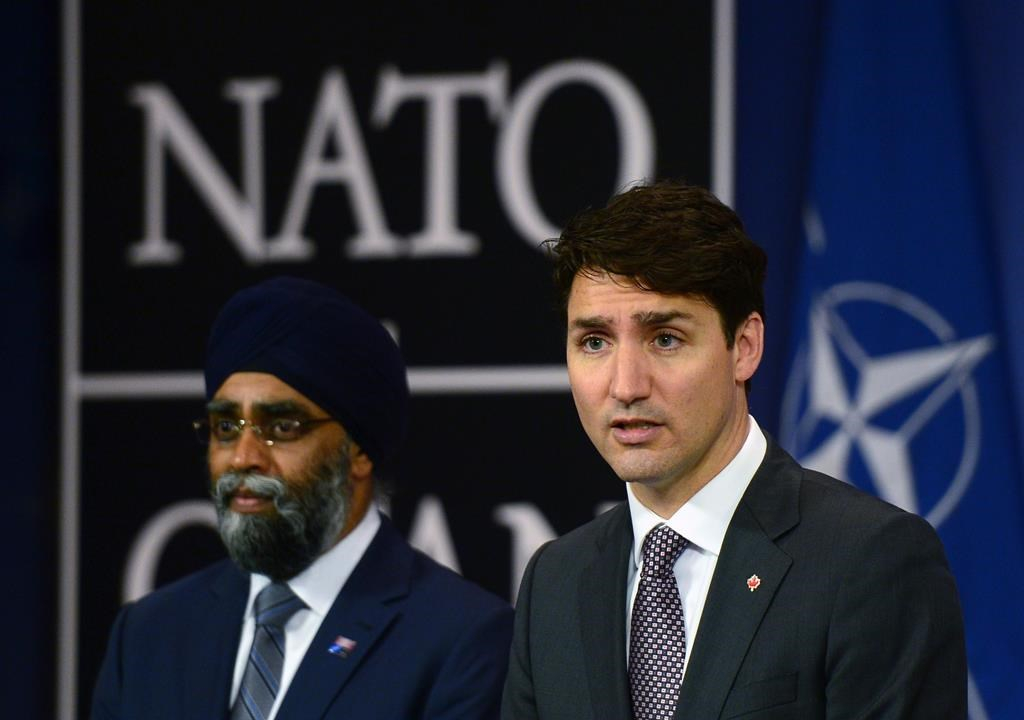 National Defence Minister Harjit Singh Sajjan stands with Prime Minister Justin Trudeau as he holds a press conference at NATO headquarters during the NATO Summit in Brussels, Belgium on May 25, 2017. Photo by The Canadian Press/Sean Kilpatrick
Previous story
Next story

Canada will continue as usual when it comes to sharing intelligence with allies, Prime Minister Justin Trudeau says, even as U.S. President Donald Trump is being accused of playing fast and loose with sensitive secrets.

"The track record has shown that collaboration and co-operation between allies, friends and partners has saved lives and keeps all of our citizens safe," Trudeau said Thursday in Brussels, where he is attending a meeting of the North Atlantic Treaty Organization.

"We are going to continue to collaborate and to work together to ensure we're doing everything we can to keep citizens and our communities safe."

The prime minister made the remarks when asked whether he had any concerns with an agreement by NATO to increase intelligence-sharing, particularly when it comes to foreign fights, as part of efforts to curb the threat of terrorism.

The White House has come under fire in recent days over revelations that Trump shared Israeli intelligence in a meeting with Russian Foreign Minister Sergey Lavrov.

The British government, meanwhile, has criticized U.S. officials for leaking sensitive details about the investigation into Monday's deadly terrorist attack at a concert arena in Manchester.

Trudeau said Canada has benefited from intelligence-sharing, but would not go into detail.

"There are many, many occasions upon which we have directly participated and in other occasions directly benefited from information-sharing between security agencies and at the highest level."

Trump issued a statement Thursday saying the White House intends to get to the bottom of what he called "deeply troubling" leaks of information.

"These leaks have been going on for a long time and my administration will get to the bottom of this," said the statement, which promised a Justice Department review.

"The leaks of sensitive information pose a grave threat to our national security."

NATO leaders are gathering in Brussels to discuss how they can better share the cost of defence and co-ordinate efforts in the fight against terrorism, but the main motivation is to woo Trump, who once called the military alliance "obsolete."

To that end, NATO Sec.-Gen. Jens Stoltenberg said the military alliance will formally join the U.S.-led coalition against the Islamic State of Iraq and the Levant, although without any involvement in combat operations.

"NATO joining the coalition to defeat (ISIL) is a strong political message of unity in the fight against terrorism," Stoltenberg said.

All 28 NATO allies, including Canada, are already part of the anti-ISIL coalition, and the military alliance has been involved in training Iraqi forces. Still, Trump had been urging the alliance to take on a bigger role.

Stoltenberg said that by formally joining the coalition, NATO will be better able to co-ordinate its efforts there with practical support, such as more flying hours for surveillance aircraft, information-sharing and air-to-air refuelling.

NATO will also set up a new terrorism intelligence cell at its Brussels headquarters and appoint a special co-ordinator to oversee the counter-terrorism efforts.

Trump has also been vocal about his demand for the other members of NATO to pick up their fair share of the tab when it comes to defence spending. Canada spends just over one per cent of its GDP on defence, just half of NATO's target.

"Canada has always been recognized as one of the go-to partners in NATO, a country that consistently steps up and steps forward and delivers on the capabilities needed internationally for NATO operations," Trudeau said.

"We continue to work very closely with our American partners to ensure that we are having, individually and collectively, the right impact around the world."

The Liberal government says its contribution is bigger than the numbers suggest, citing its commitment to send up to 455 troops to head up a multinational mission in Latvia, as part of efforts to curb Russian aggression in the Baltics.

Stoltenberg, for his part, appeared to indicate some sympathy for the Canadian position.

"This is not just about cash, but also modern capabilities and meaningful contributions to NATO's missions, operations and engagements," he said. "Today, we will take steps to keep up the momentum."

NATO members will agree to come up with annual national plans to help them meet the target, he added.

There has been much speculation about the role that Russia will play in the talks, especially given explosive allegations and domestic U.S. investigations of close ties between the White House and Russia.

Eastern European partners are concerned with Russian aggression and there are also growing concerns around the relationship between Turkey and Moscow, and their roles in the Syrian conflict.

Stoltenberg, though, tied the issue of Russia to the one of burden-sharing, which is top of mind for Trump.

"One of the reasons why we are investing in our collective defence, why we are increasing our presence in the eastern part of the alliance, is of course as a response to the aggressive actions of Russia we have seen in the Ukraine."

Stoltenberg also said that NATO will assess its "level of support and the future of the mission" in Afghanistan, where the alliance currently has 13,000 troops involved in training.

Trudeau heads to NATO, G7 summits, where Trump is top of mind for world leaders

Defence policy update delayed until after next week's NATO summit