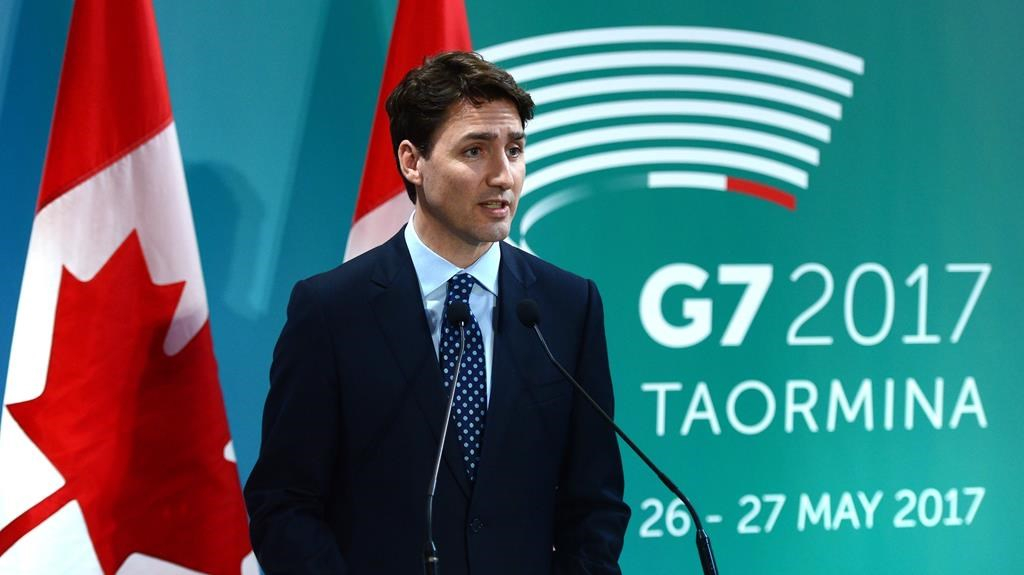 Prime Minister Justin Trudeau said the G7 meeting in Italy was a success on May 27, even as U.S. President Donald Trump wavered on climate change. Photo by The Canadian Press
Previous story
Next story

Prime Minister Justin Trudeau made his major debut on the international stage at a UN global warming conference in Paris, where the new Liberal government, crowing cheerfully that Canada was back, helped to seal a major climate deal.

Going on two years later, the Canadian prime minister is calling the G7 summit in Taormina, Italy a success, even as U.S. President Donald Trump refused to join the other leaders on committing to implementing that Paris Agreement.

"The fact that Canada recognizes how important it is to move forward on both growing the economy and protecting the environment at the same time is something that resonated around the table," Trudeau said Saturday.

"Obviously, any new administration or any new government is going to have its own approach or its own priorities," he said. "I think the value of the G7 is that we do get to have honest and robust exchanges, talk about where we're going and how we're going to get there together."

The gathering of leaders from the wealthiest democracies in the world ended without a unanimous agreement on climate change, as the U.S. said it wanted to take more time to decide whether to stay on with the Paris accord — or back out, as Trump had promised to do on the campaign trail.

Trump issued a tweet on Saturday, before the communique was even out, that he would make his final decision on the Paris climate deal next week. But several news outlets, including Reuters, reported that Trump was on the verge of pulling out of the landmark treaty.

Reuters reported that meetings had been planned with chief executives of major energy companies and other large corporations ahead of Trump's announcement of his decision.

Reuters also reported that Trump was pressed by all leaders at the meeting, including from Canada, but German Chancellor Angela Merkel feeling "annoyed" about his position.

"The entire discussion about climate was very difficult, if not to say very dissatisfying," she said, Reuters reported. "There are no indications whether the United States will stay in the Paris Agreement or not."

Canada played a leadership role in pushing for the communique to include the language on fighting protectionism, the Paris Agreement, and in particular for the reference to gender equality being "fundamental to the fulfillment of human rights," according to a federal government source.

That would be one reason why Trudeau is praising the outcome, but there were other leaders who avoided the tap dance and expressed frustration with the new man in the White House.

Merkel, the most senior leader in the G7, also described the talks on climate change "unsatisfactory," while Italian Prime Minister Paolo Gentiloni said the differences of opinion between Trump and the rest of them became obvious quickly.

Trudeau, though, said that when it came to the discussion on the Paris agreement, "Mr. Trump was in listening mode," he said, adding that everyone was able to show how important it is to rally together in the fight against climate change.

Newly elected French President Emmanuel Macron, who is seen as an emerging Trudeau ally, ended up having similarly warm words for Trump.

"I saw someone who listens and who is willing to work," he said.

A Canadian government official, who briefed reporters on the condition of anonymity, said the Liberal government believes that Trump, who once dismissed global warming as a Chinese hoax, is evolving in his views on climate change.

The official said this is based on Trump talking about innovation in clean technology and renewable energy, as well as demonstrating an understanding of climate change.

The G7 leaders also agreed to keep the ban on protectionism that existed in previous statements, which was a win for the six that had been pushing Trump to come around to their view of free trade.

But that too came with a compromise — reached in the wee hours of the morning — to accommodate his stance on trade.

"We reiterate our commitment to keep our markets open and to fight protectionism, while standing firm against all unfair trade practices," said the line in the joint communique, which was just six pages long.

There was another caveat in the section on migrants and refugees.

"While upholding the human rights of all migrants and refugees, we reaffirm the sovereign rights of states, individually and collectively, to control their own borders and to establish policies in their own national interest and national security," it said.

Meanwhile, some non-governmental organizations decried the G7 for not doing enough on food security, international development and the migration crisis.

"The one bright light is the commitment to gender equality and gender responsive economies," said Cicely McWilliam, director of policy and government relations with Save the Children Canada.

Several organizations pressed Trudeau to make sure there is a better result when Canada hosts the G7 summit next year in the Charlevoix region of Quebec.

The Prime Minister's Office issued a statement outlining some priorities Canada hopes to highlight at the 2018 summit — including familiar language on strengthening the middle class, advancing gender equality, as well as diversity and inclusion, and the fight against climate change.

The federal official noted those are broad themes and the details are still being discussed.

Trudeau's stance is not

Trudeau's stance is not surprising, given his liberal belief that we can be nice people, and somehow continue to 'have it all'. It's what sells too. Just as Harper had to bring in foreign temporary workers because there weren't enough Canadians to fill the positions, while at the same time having to build pipelines to create needed jobs............Trudeau and the Liberals are trying to convince us that we can 'grow the economy" (pipelines, mega energy extraction projects), while fighting and winning the climate change war (endless conversations where these same energy moguls get to 'evolve' in their understanding of climate change.)

Trouble with both the conservative and the liberal talking points is the basic 'fallacy of contradiction." There either are too many jobs or there aren't enough: trying to have it both ways is illogical. The Conservatives just exploited working class folks, which is what they've done for generations. The Liberals double talk is more dangerous.

Because as long as 'growing the economy' includes export dilbit pipelines, LNG, sacrifice zones like Site
C, Mount Polley, there is no way on the goddess' green earth, you can bring down CO2 rise. What you do is add methane to the mix!!!

But waiting....and being polite and sunny optimistic.....fits the Liberal way. WE'RE NICE PEOPLE, YOU CAN TRUST US....That Justin, and the Liberal strategists, believe being nice to Trump will transform him into another liberal nice guy, is positive thinking on steroids.

Ain't gonna happen. Doesn't the name Tyrannosaurus Rex Tillerson mean anything to them. Trump is the last kick of the fossil fuel crowd. Climate leaders need to oppose them.