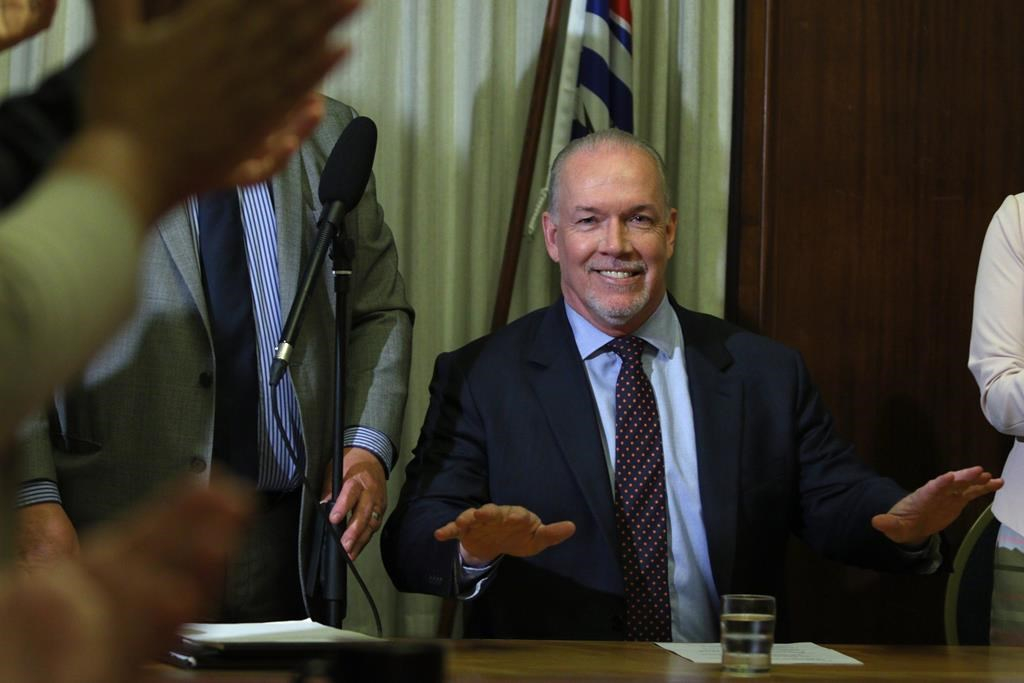 B.C. NDP leader John Horgan delivers opening remarks to the New Democrat caucus before reviewing the agreement during a press conference at Legislature in Victoria, B.C., on Tuesday, May 30, 2017. Photo by The Canadian Press/Chad Hipolito
Previous story
Next story

John Horgan spoke briefly to his caucus before it met privately to ratify the agreement, which has already been approved by the Greens.

"This agreement allows us to focus on the things that matter to British Columbians," he said to rousing cheers from members of his caucus.

Horgan and Green Leader Andrew Weaver announced Monday the two parties had reached an agreement that could allow the New Democrats to form a minority government for a four-year term.

Horgan said after 16 years in Opposition, he is excited about the prospect of governing.

"We share a great deal with the Green caucus," he said. "This is a unique opportunity for us all."

Horgan said the deal will also allow the province to defend coastal waters, an apparent reference to the expansion of Kinder Morgan's Trans Mountain pipeline that will result in a seven-fold increase in tanker traffic off B.C.

Weaver said Monday the pact reflects his party's opposition to the pipeline, which has also been opposed by the NDP.

The Greens negotiated with the Liberals and the NDP after no party won a majority of seats in a provincial election three weeks ago. The Liberals won 43 seats, the NDP 41 and the Greens took three seats.

For the first time in Canadian history, the results of the election left the Green party holding the balance of power.

Clark's Liberals were unable to persuade the Green party to back them in a minority government.

Clark is expected to react later Tuesday to the NDP-Green agreement aimed at replacing her government.

As the incumbent premier with the most seats, Clark would normally be given the first chance to form a government by the lieutenant-governor and it's unclear if the Liberals might still try to get the support of the legislature for its own agenda.

The Greens went into negotiations with the other two parties making three key demands: getting official party status in the legislature, an electoral system based on proportional representation and political fundraising reform.

The Greens and NDP have supported a system of proportional representation that accounts for the number of seats each party gets in the legislature based on their percentage of the popular vote.

Horgan has said he wouldn't want to change the electoral system without a referendum. Weaver has said his preference is to implement proportional representation and then after two elections hold a referendum on whether people want to keep it.

Two previous referendums on proportional representation have failed in B.C.