An NDP minority government in B.C. may have to water down its ambitions: experts 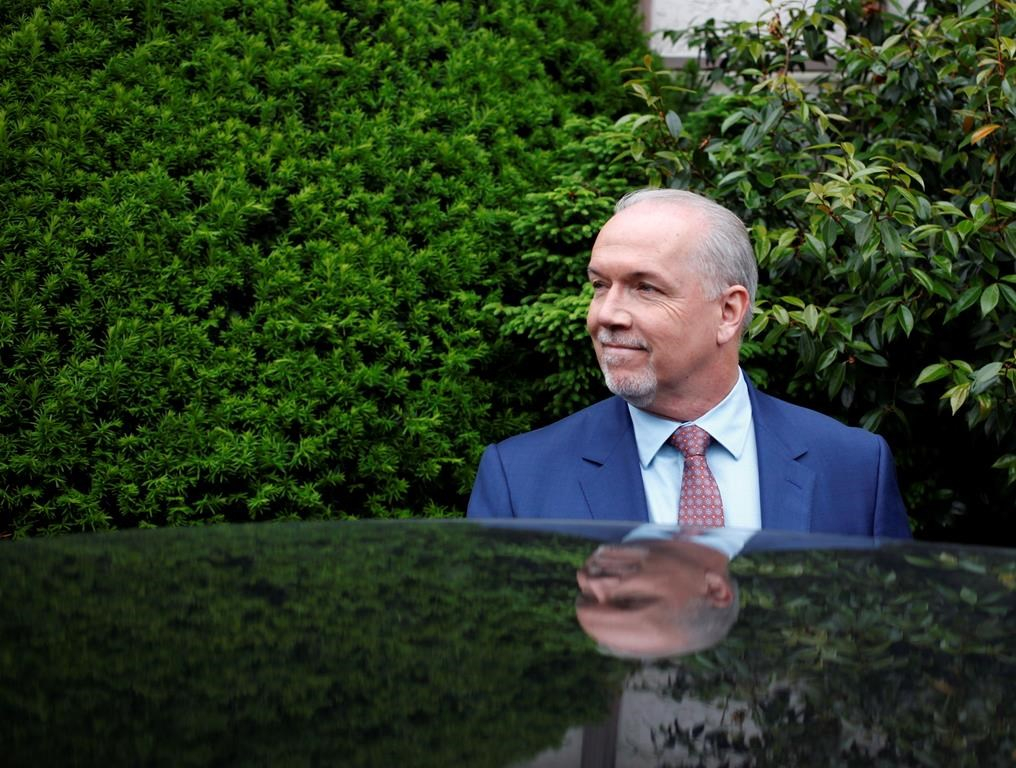 BC NDP leader John Horgan leaves the Government House after dropping off a signed document by 44 MLAs showing he has an agreement with the BC Greens in Victoria on May 31, 2017. Photo by The Canadian Press
Previous story
Next story

An NDP minority government in British Columbia would be hard pressed to make good on all the plans it has laid out in an agreement with the BC Green Party, experts say.

Duane Bratt, a political scientist at Mount Royal University in Calgary, said because NDP Leader John Horgan has the slimmest of minority governments, he might have to scale down some of his ideas.

"Horgan is in a very tenuous minority situation," Bratt said. "I'd be surprised if it lasts more than 18 months."

On Wednesday, Horgan and Green Leader Andrew Weaver delivered signed copies of their four-year agreement to the residence of Lt.-Gov. Judith Guichon. The two leaders say the deal strongly signals to the Queen's representative their commitment to a minority government.

Premier Christy Clark has said she will recall the legislature in June and expects her Liberal government to be defeated in a confidence vote.

Clark's Liberals won 43 seats in the May 9 election, one short of a majority. The formal agreement between the NDP and Greens gives them 44 seats, enough for the New Democrats to form a minority government with the backing of the three Greens in the legislature.

Horgan and Weaver said the agreement lays out a signed, good faith working arrangement for Guichon to consider in deliberations that could result in her asking the NDP to form a new government if the Liberals are defeated.

The plan consists of dozen of commitments including holding a referendum next year on a system of representation by population that would be used to determine the outcome of the next provincial election, if it is approved by voters.

Corporate and union donations would be banned, and limits placed on individual contributions to political parties.

Beyond political and electoral changes, the NDP with the Green party's support wants to increase the $30 per tonne carbon tax by $5 a tonne per year, beginning April 1.

And they have agreed to create a commission that would guide the government in boosting the minimum wage to at least $15 an hour.

There are also promises to create more affordable housing, reshape the provincial economy to reflect the development of the technology sector and bring in an essential drugs program to reduce the costs of prescription medication.

Norman Ruff, a longtime observer of B.C. politics, described the NDP-Green plan as ambitious and evidence of their political will to join in ousting the Liberals from office.

That same political will is going to be necessary to maintain consensus over the four years of the agreement, said Ruff, a professor emeritus at the University of Victoria.

He said he was struck by the gains made by the Green party.

"The Greens have clearly been able to make more than just token, marginal commitments toward their priorities," Ruff said.

Both parties made concessions to get the deal signed, but the document has a "distinctive Green tinge," he added.

Adam Olsen, a Green member who was elected in Saanich North and the Islands, said his party made compromises in its negotiations with the NDP but the agreement addresses democratic-reform issues critical to the party's agenda.

The Green platform promised to overhaul B.C.'s electoral system without a referendum, but Wednesday's deal will put the matter to voters in a November 2018 referendum timed to coincide with municipal elections.

"So, is a referendum the best-case scenario?" Olsen asked. "It's not the position I had during the election but it's where we arrived during the negotiations and I'm comfortable with it."

Lori Williams, a public policy professor at Calgary's Mount Royal University, predicted many compromises would be needed for the government to survive, given the political instability of minority governments.

"Whatever has been said about promises for support for four years, that's a difficult promise to maintain when you've got such a close division in the (legislature.) I don't think we've ever seen anything like this, certainly not in Canadian history."