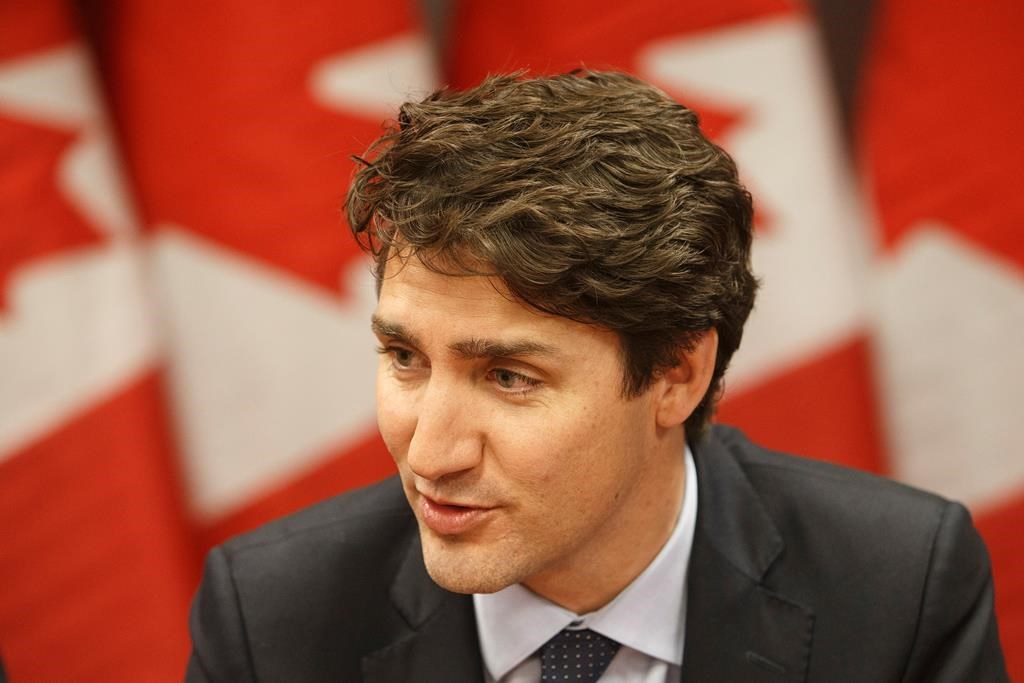 Prime Minster Justin Trudeau participates in a roundtable with the Council of India Societies of Edmonton, in Edmonton on Saturday, May 20, 2017. File photo by The Canadian Press/Jason Franson
Previous story
Next story

Canada faces a lot of challenges that won't get addressed if the country gets "bogged down" in another round of constitutional haggling, Justin Trudeau said Monday.

The prime minister was expanding on his blunt, immediate rejection last week of Quebec Premier Philippe Couillard's plan to eventually secure recognition of his province's distinctiveness in the Constitution.

Trudeau was criticized in some quarters for being too dismissive of Couillard's initiative, before the premier had even formally unveiled a 200-page rationale for restarting a nationwide dialogue about Quebec's long-standing conditions for formally signing onto the country's highest law of the land.

Bloc Quebecois Leader Martine Ouellet said Monday that Trudeau's dismissal, before he'd even read Couillard's manifesto, was a "slap" in the face of the most federalist premier Quebec has ever seen and further evidence that independence is the only solution.

Trudeau did not say Monday whether he'd had time yet to read Couillard's document.

But he remained resolute when asked to explain why he refuses to consider even talking about reopening the Constitution some day.

"I prefer to talk with Canadians about things that matter deeply to them," Trudeau said during a news conference with Chilean President Michelle Bachelet, adding that means staying focused on improving the lot of the middle class.

"We have an awful lot of big challenges on our plate that I know Canadians are more than capable of surmounting and even showing leadership to the world," he said.

"That doesn't happen when we get bogged down in the wording of the Constitution. I'm going to stay focused on the things that matter to Canadians, including Quebecers, and quite frankly, that's what Canadians expect of me."

Trudeau said Canadians elected a Liberal government "on a very clear platform" to focus on their real priorities — economic growth, job creation and climate change — and that's what he intends to do.

"We will continue to stay focused on the things that matter most to Canadians and expend our political energies on serving Canadians and their priorities, and that does not include reopening and renegotiating the Canadian Constitution."

Trudeau's father, Pierre, patriated the Constitution in 1982 over the objections of Quebec's then-separatist government.

Since then, successive Quebec premiers have reiterated their province's conditions for formally signing onto the Constitution: recognition of Quebec as a distinct society or nation, limits on the federal spending power, guaranteed Quebec representation on the Supreme Court, increased provincial control over immigration and a veto over future constitutional changes — the same five conditions Couillard is resurrecting now.

Efforts to remedy the province's so-called exclusion from the Constitution in the Meech Lake and Charlottetown accords failed, exposing deep divisions in the country and triggering a national unity crisis that led to Quebecers coming within a hair of voting to separate from Canada in the 1995 referendum.

Couillard's initiative has the potential to mushroom into constitutional squabbling over a host of thorny issues that could once again threaten national unity.

Saskatchewan Premier Brad Wall put his own constitutional demand on the table last week: fixing the equalization program that he asserted takes $500 million a year out of his province while providing $11 billion annually to Quebec.

Ontario Premier Kathleen Wynne adopted a more conciliatory tone Monday but nevertheless appeared to indicate that reopening the Constitution is not among Ontarians' priorities.

Wynne said Ontario is "absolutely committed" to working in partnership with Quebec on joint ventures, such as the two provinces' electricity trade agreement and cap and trade program, "and I think that is what is preoccupying us at the moment and certainly the people of Ontario."

In any event, Wynne said Couillard is not asking that the Constitution be reopened.

"I understand that he's put forward a statement about Quebec's place in the country and I think that the most important thing we can do is to build those strong relationships to continue to foster a strong federation. That's what I'm interested in."