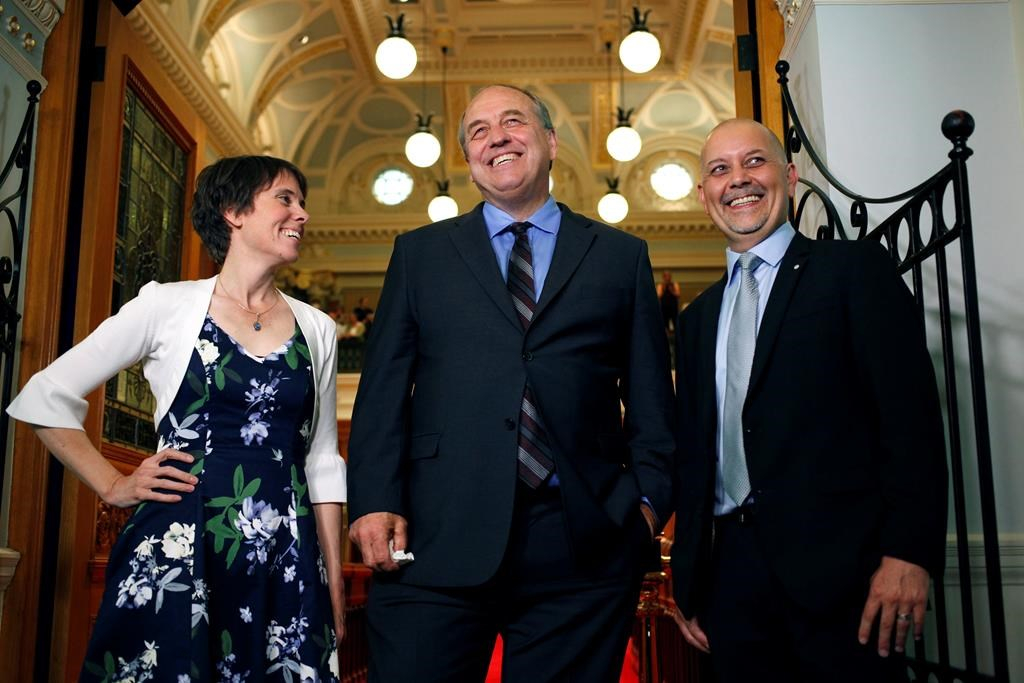 Green Caucus elected MLA's Sonia Furstenau, Andrew Weaver and Adam Olsen wait outside the legislative assembly before officially being sworn in as members during a ceremony at Legislature in Victoria, B.C., on June 7, 2017. Photo by The Canadian Press
Previous story
Next story

Three Green party members made history Wednesday when they were sworn in as members of British Columbia's legislature.

The trio have set a record for the largest number of Greens elected to a legislature in Canada.

Weaver was the only Green sitting in the legislature when the government was dissolved earlier this spring.

He said he's looking forward to working with his new colleagues.

"It's a huge sense of relief that I have help."

The Greens are eagerly anticipating their enhanced status in the legislature, Weaver said.

The election on May 9 did not produce a clear winner, but led to the Greens signing an agreement with the New Democrats to support a minority NDP government. The legislature has been recalled for June 22, setting in motion a series of moves that could see the NDP and Greens vote to defeat Premier Christy Clark's Liberal government.

"This long period of delay has led to uncertainty that we don't really need," Weaver said.

Furstenau and Olsen said the swearing-in ceremony was emotional and served to focus their political goals and aspirations.

Indigenous singers and drummers from southern Vancouver Island escorted Olsen into legislature for the ceremony. Olsen, who is a member of the Victoria-area Tsartlip First Nation, wore a traditional aboriginal blanket and headdress to the ceremony.