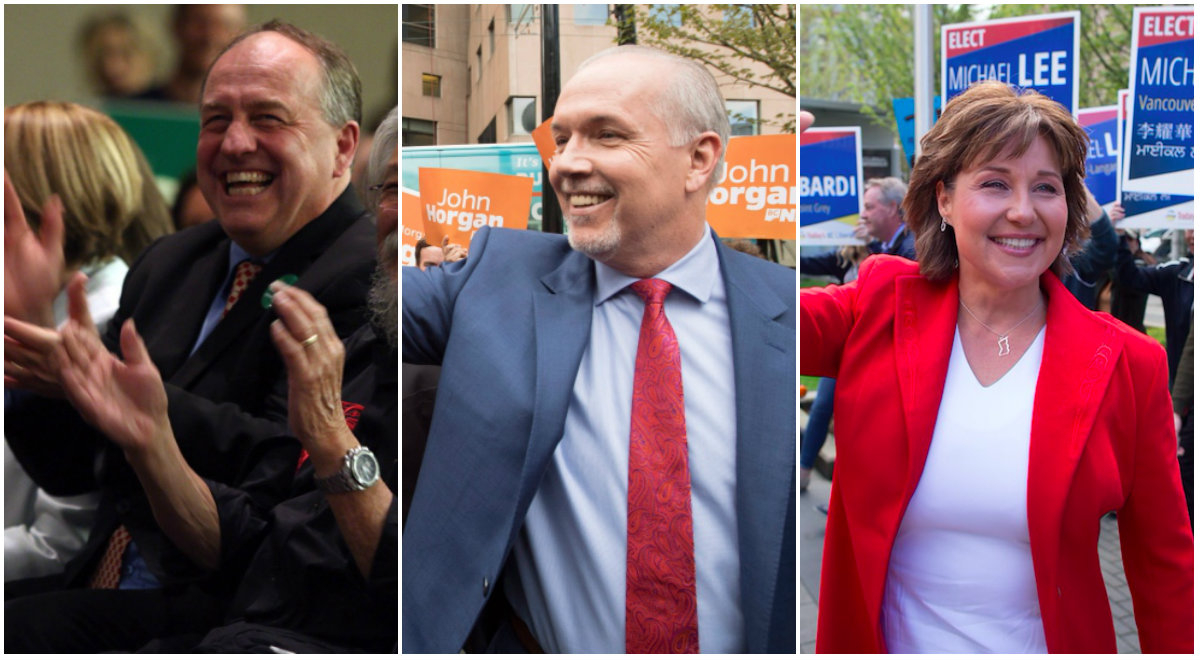 British Columbia's three main party leaders (from left to right) Andrew Weaver of the BC Greens, John Horgan of the BC NDP, and BC Liberal Premier Christy Clark. Photos by The Canadian Press
Previous story

The feigned reluctance of a newly elected Speaker who, following parliamentary tradition, pretends to resist being dragged to the head of the legislative chamber may soon be more than mock theatrics in the British Columbia legislature.

The narrow results of last month's provincial election mean none of the three parties are eager to give up one of their voting members to take on the role of impartial arbiter of the house, and experts say an impasse could send voters back to the polls.

The Speaker's role is to enforce the rules in the legislature and he or she only votes in the event of a tie, and even then only to maintain the status quo, as per tradition.

Gary Levy, former editor of the Canadian Parliamentary Review, said the absence of a Speaker would provoke a constitutional crisis.

"Basically, you have no parliament," he said. "Nothing can occur until the a Speaker is elected, which is always the first order of business following an election."

The May 9 election ended with the Liberals winning 43 seats, while the NDP took 41 and the Green party secured three. The NDP is proposing a minority New Democrat government propped up by the Greens with 44 seats, compared with 43 for the Opposition Liberals, before the Speaker is taken into account.

"It's almost an untenable situation any way you look at it," said Philippe Lagasse, a professor at Carleton University in Ottawa who studies the Westminster parliamentary system.

But there is "fluidity" around conventions, he added.

NDP Leader John Horgan, who has entered into an agreement with the Greens, said he would be open to having a Liberal Speaker, which would put him at a 44-42 advantage.

There is no rule that a Speaker has to come from the governing party.

But a Liberal party spokesman said their members all agreed not to take the job.

Matt James, who teaches political science at the University of Victoria, said it is hard to imagine why the Liberals would willingly offer a Speaker from their ranks just so the other side could have a working majority.

"Any Liberal who volunteered for the task would quickly become a pariah within Liberal circles," he said.

If an NDP or a Green MLA is appointed Speaker, that leaves the house at a 43-43 tie before the predicted confidence vote. Despite coming from the Opposition benches, the unwritten rules of the house would demand that the Speaker vote to prop up the government, which in that case would be the Liberals under Premier Christy Clark.

In such an instance, a nominee for the position could openly state he or she would break with convention on this one occasion and, given the uniqueness of the situation, cast a deciding vote to bring down the government.

The deputy Speaker position poses another conundrum. Parliamentary rules require that proposed legislation go through a committee stage that is typically overseen by another member, usually the deputy Speaker, assistant deputy Speaker or deputy chair, and who in that role also only votes in the event of a tie. An NDP or Green in that position would give the Liberals a possible 43-42 majority, allowing them to amend bills as they wished.

In Sossin's view, it is incumbent on the Liberals to respect the will of the voters, who elected more NDP and Green members than Liberals, and to put forward one of their own as Speaker so as not to be obstructionist.

If an impasse results, the premier could go to Lt.-Gov. Judith Guichon and ask for another election, at which point Guichon could agree to dissolve the house or she could turn the premiership over to Horgan to take a crack at appointing a Speaker.

The most recent precedent cited by experts is from the Dominion of Newfoundland more than 100 years ago, explained Andrew Heard, a political scientist at Simon Fraser University in Burnaby, B.C.

In the 1908 election, two parties each won 18 seats. Neither side was willing to hand the opposing party a majority by giving up a member to become Speaker, so the lieutenant-governor was eventually forced to call another election.

The Speaker was originally the delegated go-between for parliament and the monarch in Britain. Historically, the monarch would occasionally express his displeasure at unwelcome news by beheading the Speaker, leading to today's ritualistic reluctance to take on the position.

An NDP minority government in B.C. may have to water down its ambitions: experts