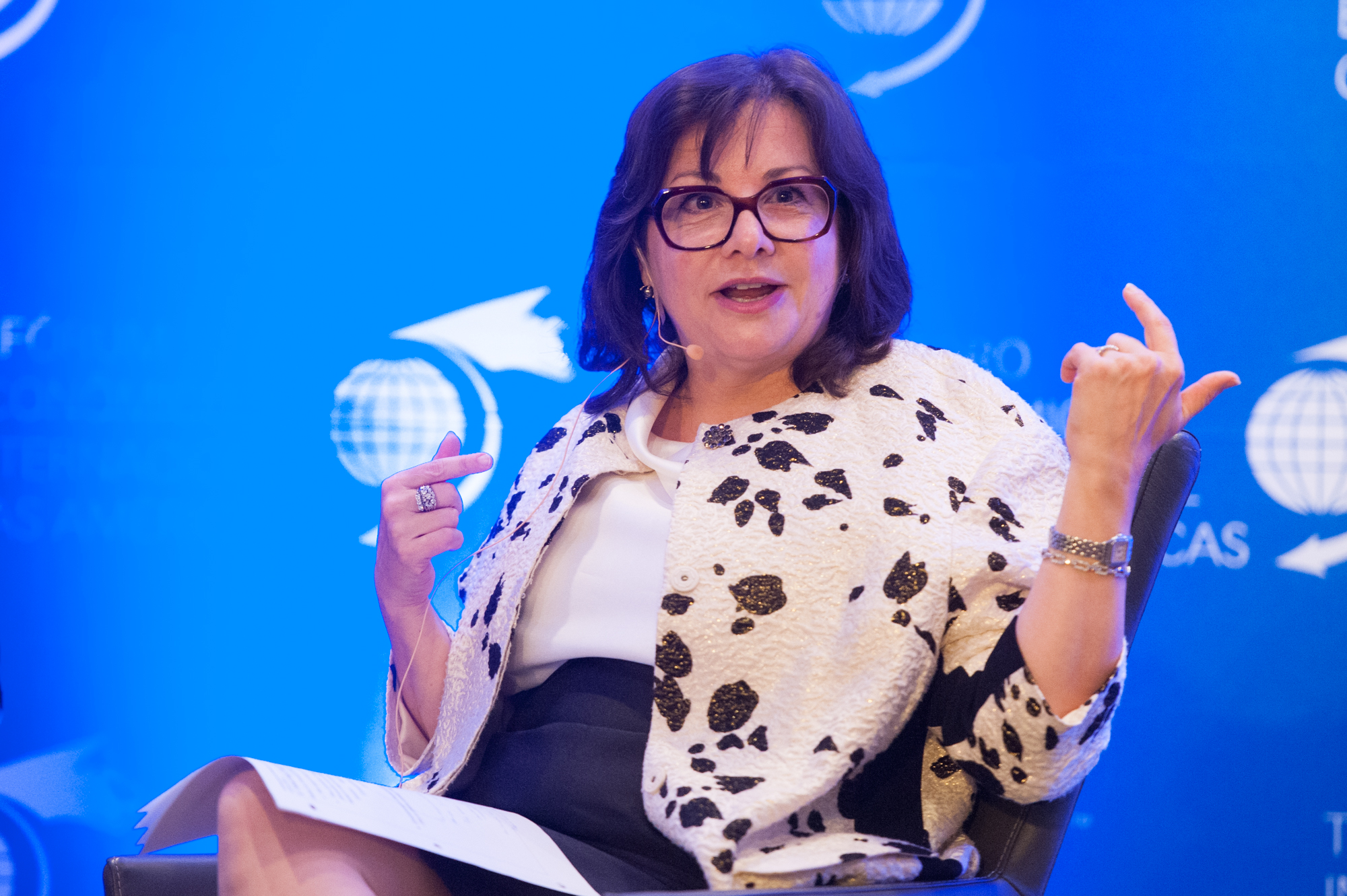 The top bureaucrat at Canada's pipeline regulator says it was a "good idea" to hire a private investigator to find out who told a journalist that she made a bad joke.

The investigation was triggered after National Observer reported last summer that Josée Touchette, chief operating officer at the National Energy Board (NEB), joked at a staff meeting that employees should be armed with tasers at public meetings. She was referring to environmental activists who disrupted an NEB hearing for the Energy East pipeline in Montreal.

Making her first public comments about the controversy in Montreal this week, Touchette defended the $24,150-contract, paid by taxpayers, for a private security firm to investigate her own staff.

“When you see or realize that some information has been treated in a way other than how it should have been, indeed it's a good idea," Touchette said in an interview with National Observer during the International Economic Forum of the Americas in Montreal on Tuesday.

Investigation decried as 'cause for alarm'

The contract sparked international criticism from Reporters Without Borders and Canadian Journalists for Free Expression. In a joint letter sent last month to the NEB's chief executive, Peter Watson, the two free press advocacy groups decried the investigation as a "witch-hunt for whistleblowers" that was "cause for alarm for the Canadian press and citizens alike."​

Touchette said her vice-president, Sylvain Bédard, was in charge of the sole-source contract awarded to Ottawa-based Presidia Security Consulting.

“I didn’t do it. It was done by my executive vice president (Bédard). I have full confidence in him,” Touchette said.

Touchette previously worked with Bédard in the public affairs branch at the Department of National Defence, where a similar investigation arose to crack down on whistleblowers who were speaking to the media.

'There's someone from National Observer here'

Touchette, who earns a six-figure salary as a senior public servant, has previously avoided making any direct comments about the issue. But she was combative when asked to explain why NEB spin doctors were sent to answer questions about the investigation instead of her or Watson.

"Of course, it's normal...Our spokesperson is our spokesperson. We have spokespeople just for that and they answered your questions."

As National Observer pressed her further on the matter, Touchette called Marc-André Plouffe, director of the NEB's Montreal office, over to join the conversation.

"Marc-André, there's someone from the National Observer here," Touchette exclaimed.

Plouffe, who was previously a spokesman for former prime minister Stephen Harper, came over to introduce himself.

After exchanging pleasantries with Plouffe, National Observer then asked Touchette what she did to promote transparency. She replied that people can find details on the NEB website.

The interview ended a moment later when Touchette said she would rather talk about the event she was attending: a panel discussion with her counterparts from North America regarding the oversight of energy infrastructure in the 21st century.

During the subsequent panel, Touchette stressed that the NEB was trying to be more transparent by "very publicly" reporting on implementation of performance measures.

“We take it very seriously and we want to make sure that our performance is deserving of Canadians' trust,” Touchette said.

She has previously said through a spokesman that her joke about tasers was taken out of context and meant "to diminish stressors and invite continuous dialogue."

Presidia sent its final report to the NEB in March concluding that it couldn't figure out who had been speaking to National Observer.

Touchette obviously will not

Touchette obviously will not own her immature, ignorant and disrespectful comment for what it was.

Many NEB staff repeatedly have indicated the uncomfortable culture under which they are expected to work (published employee survey results). No Code of Conduct or similar workplace policy of acceptable behaviour would condone Touchette's comment. Anywhere.

“We take it very seriously and we want to make sure that our performance is deserving of Canadians' trust,” Touchette said.

That Touchette was in a senior position at the NEB, is all the more reason to call her out on her comment, which in all likelihood, was not an isolated incident from her. Who needs a "role model" like her? She merely perpetuates the vile, deviant, and untrustworthy culture the NEB has become increasingly known for.

The more I think about this

The more I think about this story, the more I think that Touchette should face criminal investigation, if not charges. The hiring of a PI looks to me like a betrayal of the public trust, and perhaps fraud. The investigation by the PI was justified, it seems, as a necessary step to uncover a security breach. However, the information in question - her poor taste in jokes and apparent failure to understand the basic principles of public involvement in a modern democracy - was not classified. Indeed, had anything truly secret been involved, she would have been justified in calling in the RCMP – an actual, legitimate agency to turn to for such an investigation. That she did not says a lot. And, based on past experience with other whistleblowing cases, it’s quite possible she tried. (The RCMP would have rebuffed her, having been suckered by similar efforts in the past.)

Dressing up a personal grudge as a vital security matter, and using this as a justification to spend almost $25,000 (just under the limit which would have required a competitive bidding process) should alarm the Prime Minister and the Clerk. How is it different than using public funds for any other personal purpose? The boldness with which she speaks about this suggests that the practice is generally accepted (and I have heard of similar cases) and that she has no fear of consequences. Perhaps she should be taught a lesson in that regard.