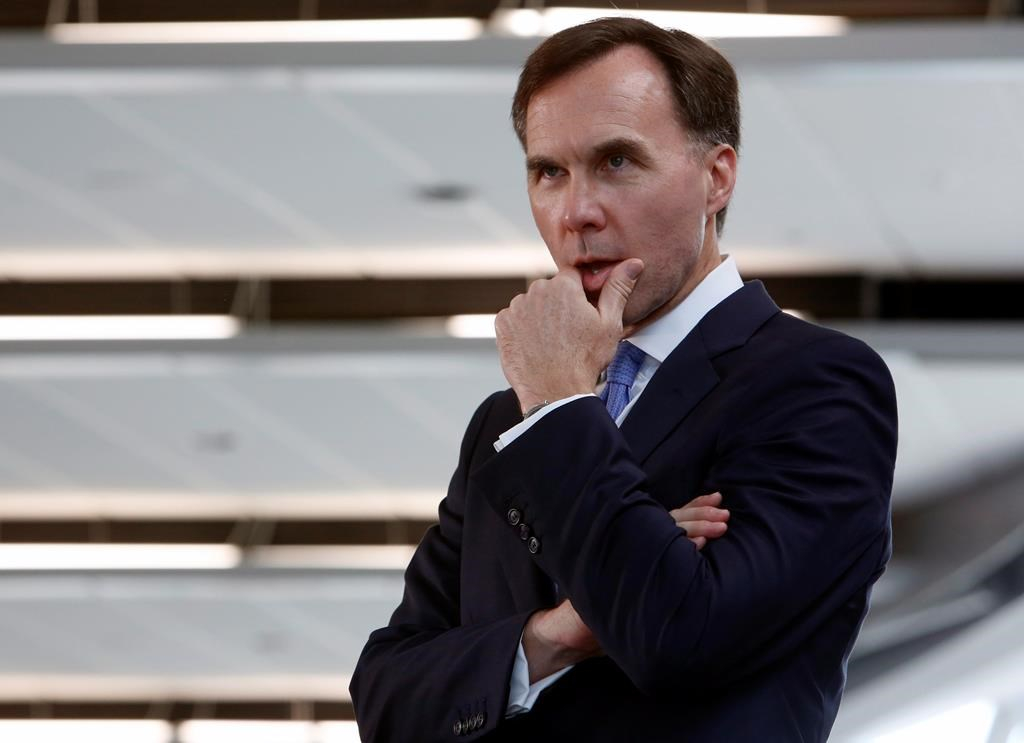 Finance Minister Bill Morneau takes part in a discussion at the fourth annual Canada 2020 Conference in Ottawa on Thursday, June 15, 2017. Photo by The Canadian Press/Fred Chartrand
Previous story
Next story

Morneau issued the warning after fielding questions for two hours from senators on the Senate finance committee about the budget.

"We've been really clear that we put the infrastructure bank in our budget because we believe it is an important budgetary measure, because there's significant financial implications from that measure," he said outside the committee room.

"We think it's going to have a big impact on our economy in the short, medium and long-term and that's why we expect that to be in our budget that we pass this spring prior to leaving for summer recess."

Morneau said he expects the budget to be passed "intact" and appeared to suggest that the unelected Senate has no business rewriting the economic plan passed by the elected House of Commons.

"We believe the House of Commons has the authority to pass the budget bill and we view this (infrastructure bank) as central to our budget," he said.

Morneau's appearance at committee came just a couple of hours before the Speaker of the Senate, George Furey, disallowed a motion from independent Sen. Andre Pratte to carve out the $35-billion infrastructure bank portion of the budget bill into a separate bill that senators can study at greater length.

Furey agreed with the government's representative in the Senate, Peter Harder, that the motion was out of order.

However, his ruling was challenged by independent Sen. Diane Griffin and senators eventually voted 38-33 to overrule Furey.

Bizarrely, Griffin tried to withdraw her challenge but too late to avoid the vote. She nevertheless ultimately joined Conservative senators and a handful of independent and Liberal senators in voting to overrule Furey.

Even more bizarrely, Pratte voted to uphold Furey's ruling to disallow his own motion, as did most independent senators. Whether Pratte will continue to push his motion is uncertain.

The infrastructure bank is to be launched with $15 billion in direct federal investments and another $20 billion in repayable contributions, loans and loan guarantees. The government hopes to leverage up to $5 in private investment for every $1 in government funding to finance what Morneau called "transformational" infrastructure projects.

During the committee hearing, Pratte and other senators grilled Morneau about the "governance structure" of the bank, over which the federal government will have final say on the projects. Several expressed concern about possible political interference in the choice of projects that are funded.

But Morneau maintained that projects will have to be approved by provincial and municipal governments and will have to attract investment from pension fund managers or other institutional investors — none of which would happen if the projects were chosen strictly for political purposes.

Morneau said the governance structure is similar to that in place for other Crown corporations and has proven to work well.

Pratte also raised concerns that taxpayers could wind up on the hook if projects financed by the bank go over-budget or flop. But Morneau contended that taxpayers are at risk for, at most, the $15 billion in direct federal investment; for the other $20 billion in repayable contributions, he said private sector partners would bear all of the risk.

The bank is not the only objection some senators have to the budget bill. Several complained about a provision that would see the federal excise tax on beer, wine and spirits increase by the rate of inflation every year.

Morneau argued that the so-called "escalator" provision means the tax on booze will remain constant "in real terms," after inflation is taken into account.

Morneau to meet with American counterpart in Ottawa next week