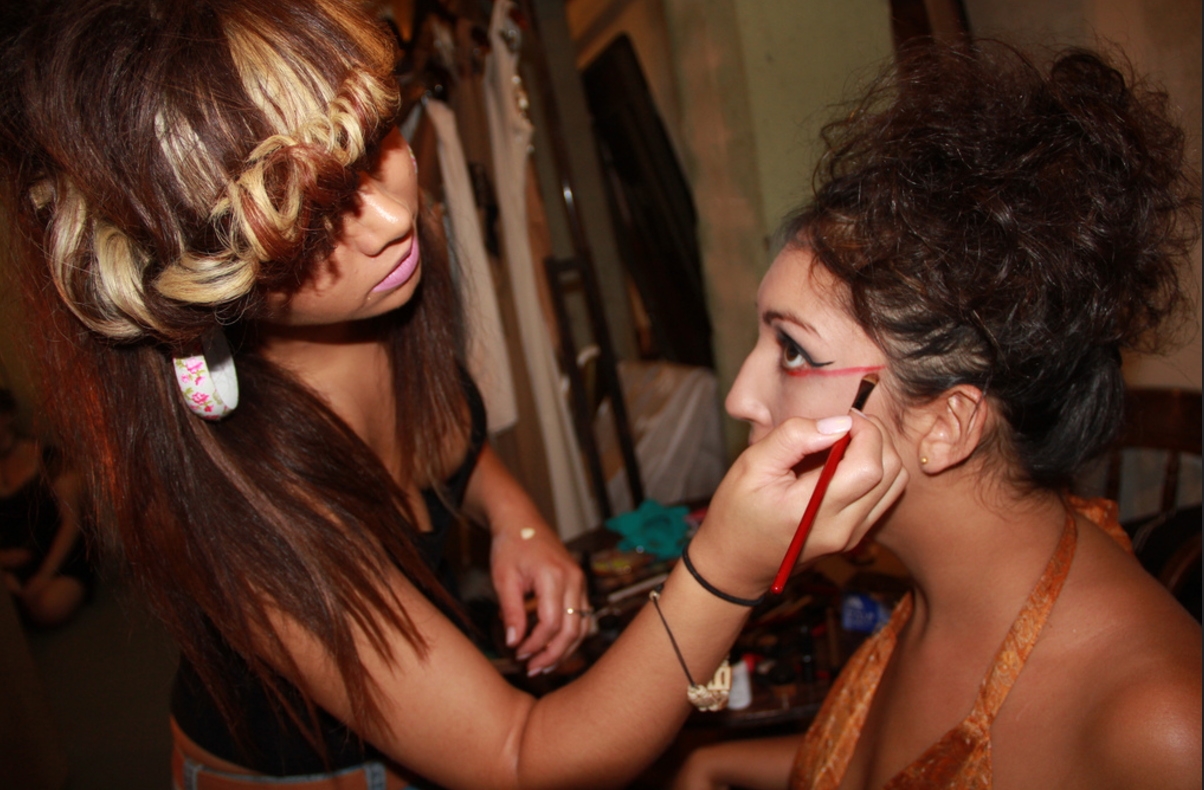 Two ingredients, when used in combination as a preservative in certain cosmetics products, poses a health risk to Canadians, the government says. Photo of makeup artist Genevieve on Aug. 18, 2011 by rawartistsmedia on Flickr Creative Commons
Previous story
Next story

Health Canada delayed its own ban on skin-care products it knew could be harmful after cosmetics firms demanded more time to reformulate and sell off their merchandise, documents show.

The government has acknowledged that certain cosmetics ingredients are known to cause rashes, itching, swelling, burning, dry skin and blisters in some situations, leading the health department to put them on a hotlist of prohibited and restricted products.

But after a prominent industry group representing cosmetics manufacturers complained to Canada’s top health bureaucrat about the timeframe of its ban and the impact on sales, the department pushed back its ban by more than six months, even though it had already built in a transition period.

The revelation, which has led one environmental group to criticize the government for caving to industry pressure, is contained in internal departmental documents obtained under access to information law by Ottawa researcher Ken Rubin, and subsequently confirmed in interviews with industry and government.

“Obviously they identified some fairly serious allergic reactions,” said Elaine MacDonald, program director for healthy communities at environmental law charity Ecojustice, after National Observer asked her to review the documents. Ecojustice has targeted other ingredients in cosmetics for elimination

“To extend the phase-out just because industry is worried about products being left on the shelf that they won’t be able to sell, means they’re putting the industry’s interests before the health of Canadians.”

The government defended its actions by saying the health risk of these ingredients, called methylisothiazolinone and methylchloroisothiazolinone, are “relatively low.” It also says it excluded products made for children under three years of age from the delayed ban.

The risk is only present when the two ingredients are used in combination as a preservative in certain products left on the skin, like moisturizers, creams, makeup, deodorants and sunscreen, the government notes. Similar to food, many cosmetics products use preservatives to prolong shelf life and allow products to be stored at room temperature.

Both the government and the industry group also agree on several points: that consumers who want to avoid the ingredients can read a product's label before buying; that the United States had not banned the ingredients; and that European rules for these ingredients allowed for a longer phase-out period.

The department took many of the factors into account "when determining an appropriate risk management approach." It concluded it would allow affected products to continue being sold after their original ban date of June 14, 2016, through to Dec. 31, 2016, Health Canada spokesman Eric Morrissette wrote in an emailed response to questions.

Darren Praznik, president of the industry group, Cosmetics Alliance Canada, also downplayed the risk factor. “If an ingredient is found to be of imminent concern, going to do real health harm, it should go right away,” he said. “But if it’s something you’re noticing is an increased concern for dermatitis, you usually then provide for a period to reformulate the product, because you have to find a new preservative.”

Yet Health Canada's own internal documents note that "over the past few years, scientific evidence has been demonstrating steadily increasing rates of sensitization" to these ingredients in some products.

A 'flawed understanding' of regulations

In September 2014, the European Union banned the mixture of these preservatives from products left on the skin, as opposed to rinse-off products like shampoo. The EU said its ban was “aimed at reducing the risk from and the incidence of skin allergies.”

The following April, Canada’s health department told Cosmetics Alliance Canada, then called the Canadian Cosmetic, Toiletry and Fragrance Association and said that it was expecting to add the ingredients to its own watch list, according to an April 22, 2016 internal memo sent from a senior Health Canada bureaucrat to Deputy Minister Simon Kennedy.

The government can amend its Cosmetic Ingredient Hotlist to include new substances it believes represents probable violations of Section 16 of Canada’s Food and Drugs Act, which says no person shall sell cosmetics products that may hurt users when used in the way people typically use them.

On Dec. 14, 2015, the department posted the ingredients to the hotlist. It included a six-month transition period to allow companies to sell off their products, which would have ended on June 14, 2016.

But after the December 2015 posting, calls from industry started coming in.

The industry group, "as well as several of its member companies, contacted Health Canada to express dissatisfaction with the transition period and to request more time to reformulate and repackage their products," the internal memo states.

"Health Canada learned that numerous manufacturers, based on a flawed understanding of the cosmetics regulatory process, anticipated an extended transition period similar to the 18-month transition offered in Europe. Many indicated that they would suffer significant losses if forced into immediate compliance."

On March 14, 2016, Praznik spoke with Kennedy, and a week later on March 21, Praznik sent a letter to Kennedy “briefing” him on some of his concerns, which included a request for “a fair and adequate" period to reformulate the product with new preservatives and sell off current stock. The letter was included with the internal memo.

“What we asked was for sufficient notice of when they would actually enforce it on a similar basis to Europe,” said Praznik in an interview, explaining why he sent the letter.

Praznik and Kenney spoke for a second time a few days later on March 24, 2016, according to the memo. At this discussion, Health Canada told the industry group that it would be pushing back the ban on products being sold in stores by 200 more days, or six and a half months, to Dec. 31, 2016.

In a draft response to Praznik included with the memo, bureaucrats proposed that Kennedy would thank Praznik for the March 21 letter and acknowledge that the association “represents a large and diverse membership.” It is unclear if the draft letter was actually sent.

“It is important to me that we keep open lines of communication between our organizations on this and other critical files,” reads the draft letter. “As we have discussed, we have been working to address the concerns raised by the [industry group] and its members regarding the time period for the removal of affected products from the market.”

In determining its approach, the draft letter reads, Health Canada “took into consideration the confusion among industry” on how to stay within the law, “along with the business impact caused by changes to the hotlist, as illustrated by industry.”

On May 10, 2016, over a year after it first warned industry about a potential ban, Health Canada issued a public advisory about the ingredients, "informing consumers of potential risks" and warning users who experience sensitivities or allergic reactions to "avoid using products that contain this preservative."

Praznik argued the industry wasn't questioning whether the ingredients should be removed, only why the regulatory process wasn't similar to that in Europe.

“We said, ‘Wait a minute. In Europe, they provided 18 months for a transition. Why aren’t you doing it here?’” he said. “Companies just can’t switch it tomorrow. And the level of risk obviously did not warrant that, given the 18-month period in Europe, and the fact that the United States chose not to act at all.”

Ecojustice’s MacDonald, however, said it was an unusual defence to cite the European situation, given that the phase-out in Europe was announced in 2014, a year before Canada got the ball rolling. That called into question whether the industry could have actually been confused about the timeline, she said.

"You can try and frame it any way you want, but to me it looks like the government did bend to pressure from the industry to extend the phase-out," she said. “Given the European phase-out that happened two years earlier, there’s no way they would have been blindsided...chemical regulations are quite international; when one country does something, other countries look at it closely."

Health Canada's Morrissette wrote the department “moved quickly” to address the issue “in response to the emerging science.” He said Health Canada carried out “compliance monitoring activities” in August 2016 to determine whether any children’s products were still being sold.

“All 575 of the products inspected were found to be compliant,” he wrote.

On Feb. 15, 2017, the department launched another compliance project to see if the new Dec. 31, 2016 deadline had been met. That project is “still ongoing,” wrote Morrissette.

Are Canadian women killing themselves with cosmetics?

After 150 years, our government still does not have our back.
Industry continues to control our health, our environment, and our government.