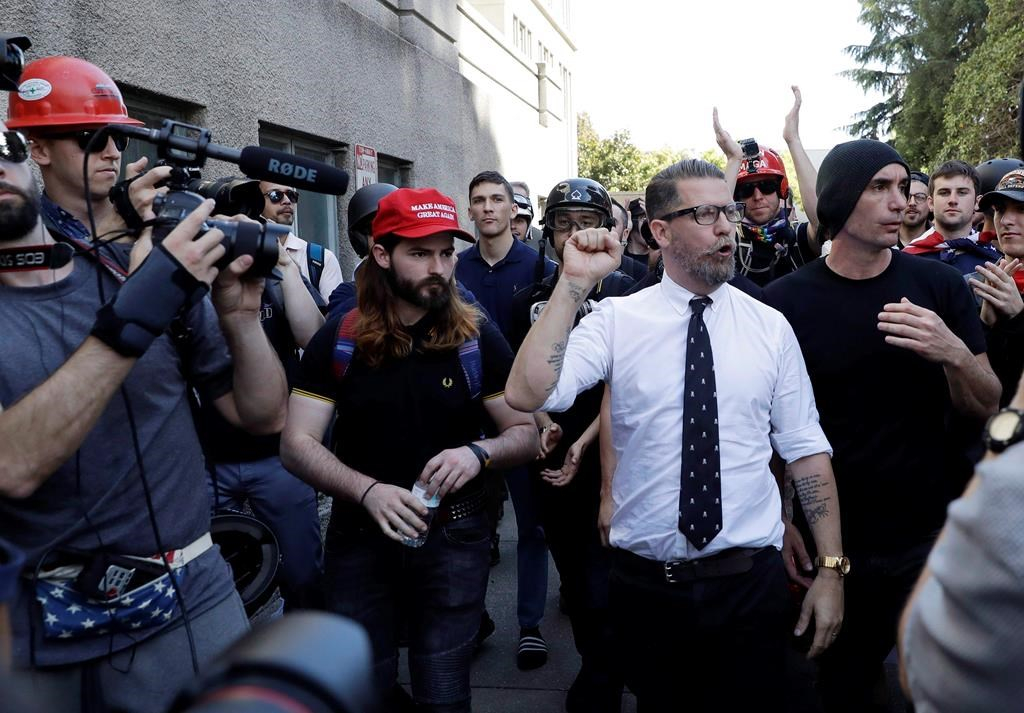 Gavin McInnes is surrounded by supporters after speaking at a rally Thurs. April 27, 2017, in Berkeley, Calif. File photo by The Associated Press/Marcio Jose Sanchez
Previous story
Next story

Until this week, few Canadians had heard of the Proud Boys. That changed on Canada Day, when five young men in matching black polo shirts disrupted an Indigenous ceremony in Halifax.

That brief, 10-minute confrontation at a statue of Edward Cornwallis — the British general who founded the city and issued a bounty on the scalps of the Mi’kmaq people — has put the military career of each man in doubt. The incident has shone a spotlight on a retrograde group that sprung up last year amid the rise of U.S. President Donald Trump and the many in-your-face, far-right groups that support him.

Will Sommer, a journalist in Washington, D.C., who has followed the small movement, said the group was founded in the U.S. by Gavin McInnes, a Canadian who helped establish Vice Media and is now an outspoken political pundit with an internet talk show and regular stints on Fox News and Canada's Rebel Media website. (Vice severed ties with McInnes in 2008.)

McInnes has been eager to speak to reporters about the Canada Day incident, saying he plans to travel to Halifax to present military officials with an online petition that describes what happened as a witch hunt.

CBC's "Power and Politics" invited McInnes to its show Wednesday and has since received considerable backlash. The show apologized Thursday for the controversy, with reporter and occasional host Hannah Thibedeau saying viewers were not informed about anti-Semitic sentiments McInnes has expressed in the past.

"We could have also challenged him more on his controversial views," Thibedeau said on the program. "And although we heard from an academic immediately following the interview, to get an opposing perspective on the group, we also could have followed up that interview with an Indigenous voice."

Sommer — a journalist with The Hill, who also produces an online newsletter about conservative media — said McInnes has made a second career as a "right-wing provocateur" and "prankster."

"(The Proud Boys) are definitely worth keeping an eye on," he said. "They tell themselves it's like the Elks Lodge or the Knights of Columbus, but there's this political element, and the prankishness has allowed them to say they're just kidding around. ... There is a violent aspect to it, though they say it's all in self-defence."

Sommer said the group, which probably includes no more than 1,000 members in the U.S., is a tamer version of the hard-core, racist and anti-Semitic alt-right groups that have sprung up in the shadow of Trump's presidency.

"They are able to have events all over the country and they can pull about 20 or 30 people in random cities," he said in an interview. "It's not a huge organization ... (But) as we saw in Canada, they're willing to go places and disrupt things."

However, becoming a Proud Boy involves more than just signing up online. As part of the group's odd initiation ceremony, prospective members declare, "I am a Western chauvinist who refuses to apologize for creating the modern world." Existing members then pummel the recruit as they try recite the names of five breakfast cereals.

It's all in good fun, said McInnes, who is based in New York. The frat-like rite was adopted from a rough game he learned while attending high school in the Ottawa suburb of Kanata, he said in an interview Thursday.

McInnes insists the Proud Boys are just a bunch of lads who like to share a brew or two in a club — away from their wives.

With the rise of feminism in the 1980s, men have stopped getting together to form bonds at social clubs, McInnes said.

"So we started bringing it back, and there was a huge demand for it," he said, insisting the group does not tolerate racism or homophobia. "Almost overnight, there were chapters all over the world."

McInnes said he isn't advocating violence. He said the group has been forced to take steps to protect their members at rallies where brawls with anti-fascist protesters have become common.

"We get attacked every day just for wearing (Make America Great Again) hats," he said, referring to Trump's campaign slogan.

Sommer said the Proud Boys are tapping into a notion that young, white men are being oppressed by feminists.

The group advocates for a return to a 1950s sense of traditional gender roles. Among the 10 tenets of the Proud Boys is: "Venerate the housewife."

"You hear that a lot as a young man: that masculinity is gross and the West is evil, and you start to believe it," McInnes said. "(The West) doesn't deserve any of the abuse it's getting."

The Proud Boys' libertarian code also includes: advocating for the closure of all prisons; giving everyone a gun; legalizing drugs; ending welfare; closing the borders to immigrants; outlawing censorship; glorifying entrepreneurs; recognizing "the West is the best;" and "shutting down the government."

To be sure, the Proud Boys are more than just a club for men.

McInnes, who made a point of mentioning that his wife and three children are registered Ho-Chunk native Americans, said the actions of the Proud Boys club in Halifax, which includes only about five members, were unfairly depicted by the media.

He suggested that the Aboriginal mourning ceremony was actually an "anti-Canada Day celebration," which among other things included two people holding up an upside down Canadian flag with the word "decolonize" written on it.

"So, you're telling these servicemen, who are willing to die for the flag, that their country doesn't exist," said McInnes, referring to the fact that the group was told they were on unceded Mi'kmaq territory. "These guys didn't know it was meant to be a religious ceremony."

However, the Canadian military and the Nova Scotia government have taken a very different view.

"All Nova Scotians believe we are on traditional Mi'kmaq territory," Premier Stephen McNeil said Thursday. "The Aboriginal community has been the foundation of this great country. They have rights through treaties signed by our ancestors...There's no way that the expression that was made by a small group of (Proud Boys) reflects the position that Nova Scotians have taken."