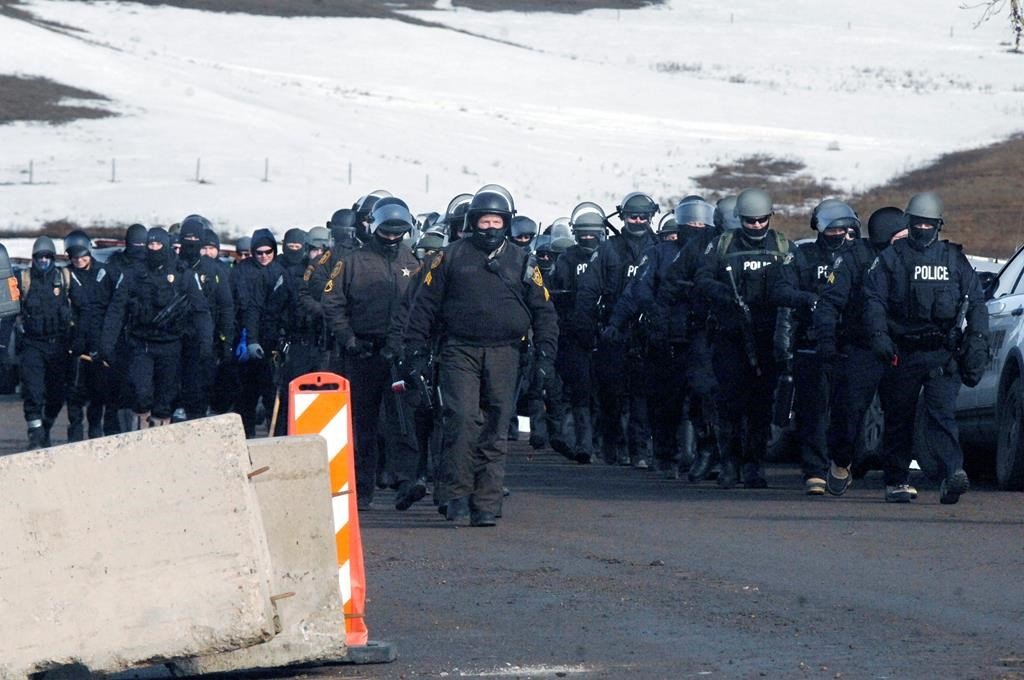 Authorities cleared a protest camp where opponents of the Dakota Access oil pipeline had gathered for nearly year on Thurs. Feb. 24, 2017. Forty-six people were arrested. File photo by The Associated Press
Previous story
Next story

Environmental protesters are increasingly being treated like criminals and slaughtered when they are defending land from the encroachment of pipelines, mining, and other resource development, says a new report released on Thursday.

This revelation was included in a sweeping report by Global Witness on the state of “environmental defenders” in 2016—a year marked, for example, by ongoing protests of oil and gas pipelines in North America and many other forms of environmental protest around the world.

"In Canada, environmental groups and First Nation Peoples fear new anti-terrorism legislation will be used to step up the surveillance of protesters opposed to oil and mining projects," the report said. "The Canadian media has also reported on several government agencies that are systematically spying on environmental organizations."

The group calls for governments to reform laws “that unjustly target environmental activism and the right to protest,” and urged companies to “stop abusing the judicial process to silence defenders.”

Global Witness also calls on governments to ensure activists “can peacefully voice their opinions without facing arrest, and are guaranteed due process when charges are brought against them.”

Global Witness is an international advocacy organization that bills itself as investigating—and making public—links between resource extraction, conflict, and corruption. The not-for-profit research group is based in London, UK.

The bulk of its new report deals with the slayings of environmental activists.

They found nearly 200 people were murdered all over the world last year in connection to mining, logging, and other extraction efforts, or while protecting national parks.

"Almost 1,000 murders have been recorded by Global Witness since 2010, with many more facing threats, attacks, harassment, stigmatization, surveillance and arrest," the report said. "Clearly governments are failing to protect activists, while a lack of accountability leaves the door open to further attacks. By backing extractive and infrastructure projects imposed on local communities without their consent, governments, companies and investors are complicit in this crisis."

The research described the mining sector as one of the most dangerous and that 2016 overall was the deadliest year on record since they began monitoring this issue.

“These reports tell a very grim story. The battle to protect the planet is rapidly intensifying and the cost can be counted in human lives,” said Global Witness campaigner Ben Leather in a statement issued alongside the report’s release on Thursday.

“More people in more countries are being left with no option but to take a stand against the theft of their land or the trashing of their environment. Too often they are brutally silenced by political and business elites, while the investors that bankroll them do nothing.”