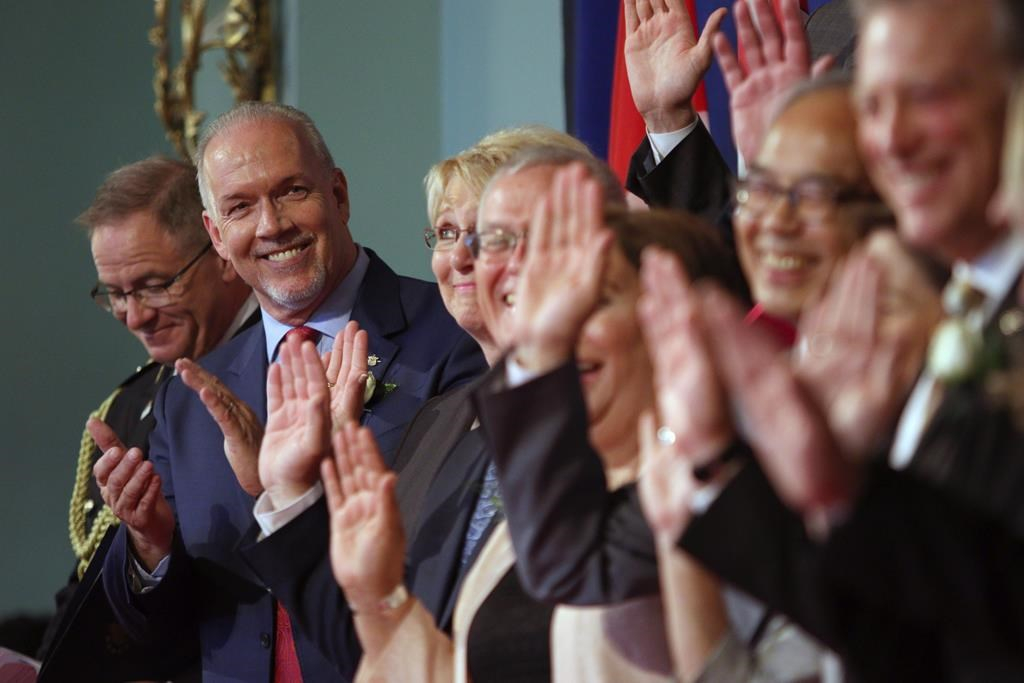 Premier John Horgan smiles at cabinet members after being sworn-in as Premier during a ceremony with his provincial cabinet at Government House in Victoria, B.C., on Tuesday, July 18, 2017. File photo by The Canadian Press/Chad Hipolito
Previous story
Next story

John Horgan has been British Columbia's premier for less than a day and already the requests are flooding in, as various groups compete to get their respective wish lists into the new government.

Glen Hansman, head of the B.C. Teachers' Federation, offered his congratulations to the new government Wednesday as he highlighted a shortfall in promised funding needed to hire teachers and organize classes mere weeks before the academic year is scheduled to start.

"We're going to have to be patient. Miracles aren't going to happen overnight," Hansman said. "But I'm hopeful that over the summer the incoming government will be able to provide a bit more money to school districts."

Hansman's request was far from the only one vying for the government's attention, as news releases and congratulatory notes came from more than a dozen advocacy groups, environmental organizations and industry associations.

But longtime political observer Norman Ruff said Wednesday that Horgan would do well to avoid any distractions outside of the wildfire crisis until he can reconvene the legislature and secure money to keep the government running for the remainder of the year.

"It's going to take a while for them to get around to all the expectations that they've raised. I would counsel them to stay focused," said Ruff, a retired political scientist at the University of Victoria.

"Then, come the spring, really pull out all the stops to show that they are capable of governing.

"Victoria wasn't built in a day."

Horgan and his 22-member cabinet, made up of an equal number of men and women, were sworn in Tuesday, ending 16 years of Liberal rule in B.C. and capping off months of political limbo following the May 9 election.

Speaking to reporters on his first full day as premier, Horgan only took questions related to the wildfires, which have displaced more than 45,000 people across the province's central and southern Interior.

But his speech from the day before honed in on several key issues, including the opioid crisis, softwood lumber and the importance of investing in education.

Hansman also said the teachers' federation, a longtime ally of the NDP, looked forward to working with the new education minister, Rob Fleming, on capital needs around seismic upgrades and new-school construction, as well as curriculum development.

Horgan's government also received greetings from the Business Council of B.C. and three advocacy groups for the province's mining industry.

"We look forward to working with the new government to progress (on) key issues, such as access to land, capital and public geoscience to enable mineral explorers and developers to continue conducting their important work," said Edie Thome, head of the Association for Mineral Exploration.

B.C.'s law society and civil-liberties lobby group both emphasized the importance of improving access to justice and investment in legal aid.

Josh Paterson of the B.C. Civil Liberties Association outlined 10 priorities for the new government, including electoral reform, eliminating racial discrimination in policing and the justice system, reforming the correctional service and doubling down on the opioid crisis.