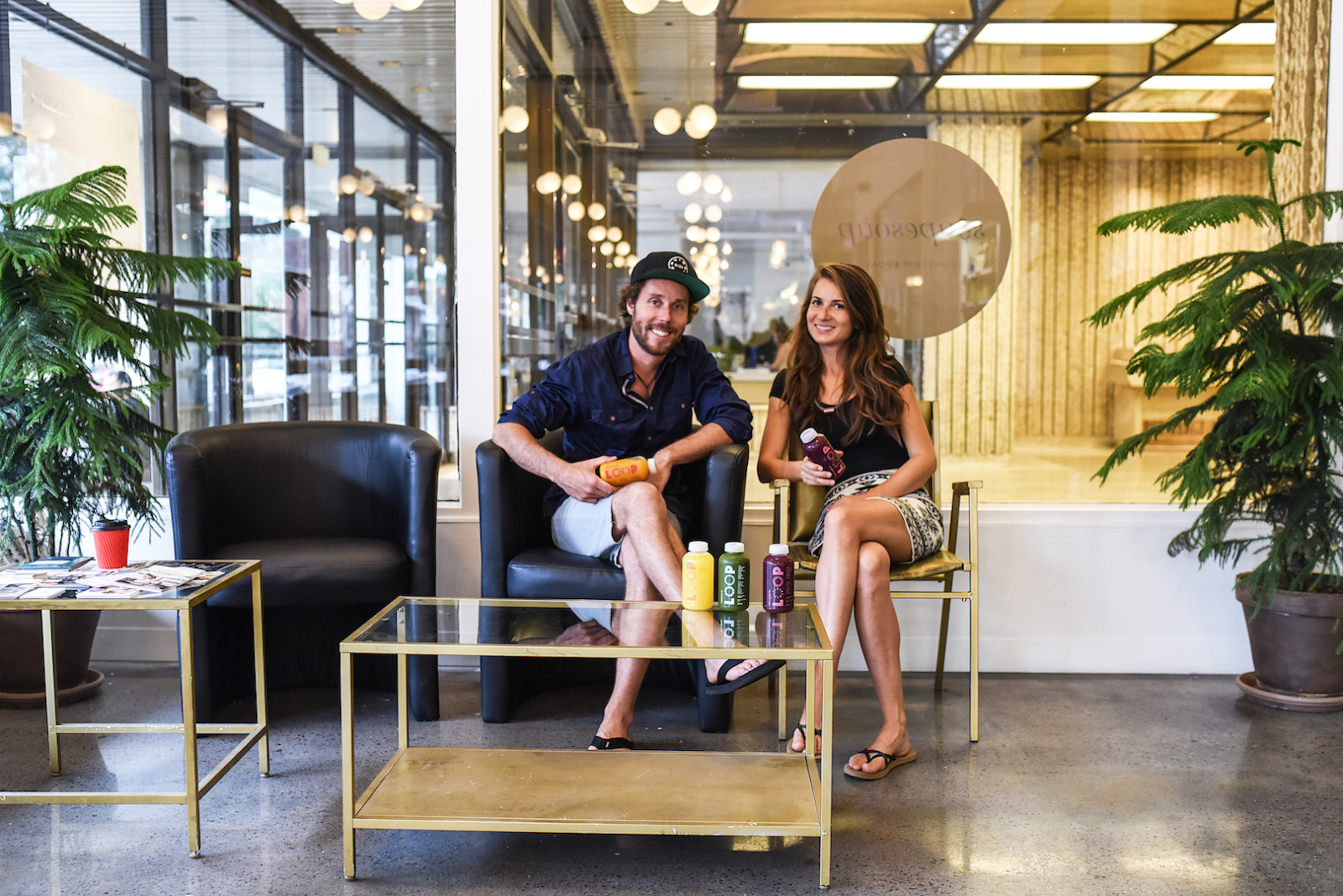 David Côté and Julie Poitras-Saulnier started their company, Juice Loop, to fight against the forces of food waste. Photo by Sylviane Robini

Every day, a large warehouse in the eastern Montreal suburb of Anjou throws away nearly 16 tons of food and vegetable products.

It belongs to Courchesne Larose Ltd, which — like other food distribution companies — faces a complex balancing act when it comes to managing its supply chain and avoiding waste.

The family-run Montreal business is nearly 100 years old and has dealt with this challenge for decades. But one of its executives believes he has squeezed out a thirst-quenching solution to reduce the waste.

"Everyone here (at Courchesne Larose) knew we had to do something about our surplus (products)," said Frédéric Monette, the great-grandchild of Raoul Routhier, who was one of the founders of Courchesne Larose.

Monette thought it would be a good idea to use the surplus fruits and vegetables to make juice, but he wasn't sure how to execute on that plan. One day, he mentioned it in passing to his fitness trainer who offered some key advice.

Enter the trainer's recommendation: David Côté, the Montreal entrepreneur behind Crudessence, a vegetarian restaurant chain, and a healthy drink called Rise Kombucha. Côté had also been exploring the idea of making juice from surplus food and Monette invited him to his office for a discussion.

“We talked in my office for two hours about how we could work together, and after two hours we had revolutionized the world and had a beautiful business plan,” said Monette, vice-president of administration and operations at Courchesne-Larose.

Julie Poitras-Saulnier, who had studied sustainable development and worked in marketing for responsible food products, was next to join the team. Her expertise allowed Monette to focus on business details like supply chain while his two new partners zeroed in on improving environmental performance.

"All the stars were aligned with the right people arriving at the right time to pursue this project," Monette said.

Together, the three of them have created a new business called Juice Loop, or Jus Loop in French.

“I wanted (to work on) a new business model where I felt the more we were going to sell a product, the bigger the positive impact and not the opposite like it’s often the case (in business),” Poitras-Saulnier told National Observer in an interview.

Poitras-Saulnier said she has always been careful about food waste as a consumer. She even remembers “freaking out” one time when she had to throw away a celery stalk. But in this case, there was a lot more than a handful of greens to tackle.

When she and Côté first visited the Courchesne Larose warehouse, they were shocked by a “wall” made up of racks of fruits and vegetables, piled up nearly 11 metres high. They were products that would wind up in a landfill simply because the industry had decided they could no longer sell them. 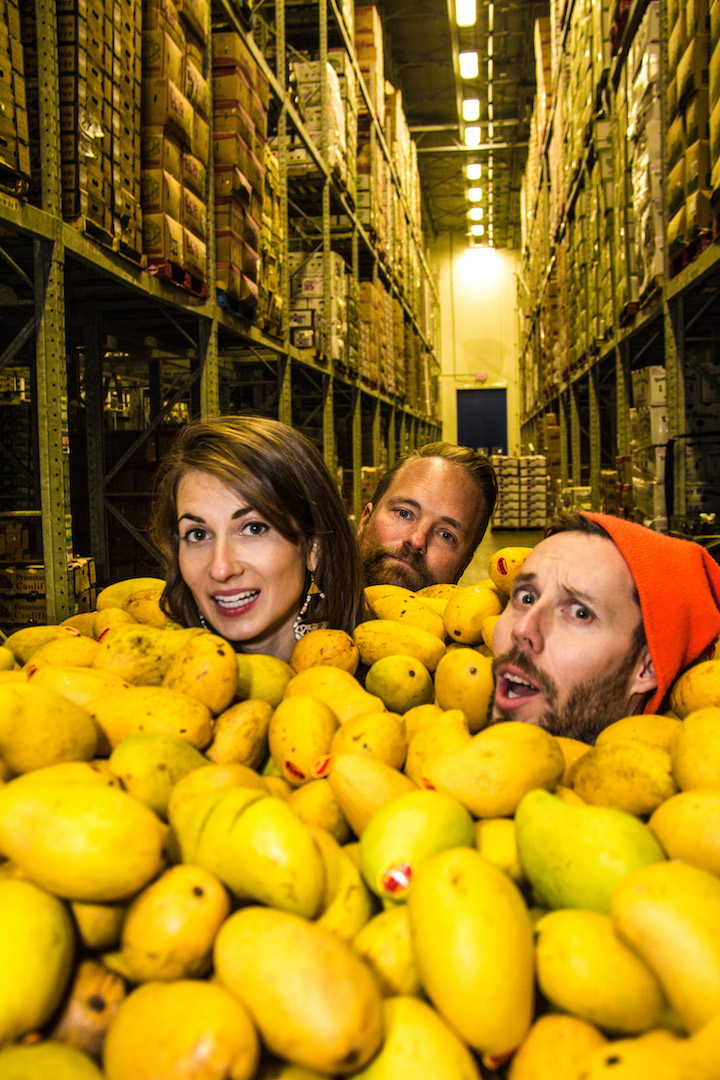 From food stand to food supplier

The origins of Courchesne Larose are humble. The company started in 1918 with a food stand at the historic Bonsecours Market in Old Montreal, helping local producers get access to the market.

Nearly a century later, the company is a major food supplier for grocery stores and other clients on the east coast of North America. But with that growth comes challenges, like managing supply and demand in large quantities.

In the food supply industry, the business model is partly based on speculation about the level of demand from groceries and anticipated sales, said Poitras-Saulnier. For example, a supplier could request 25 containers of fruit, but then fail to sell all of them, she explained.

"Sometimes they sell less — they could sell 20 containers. So there would be five left over the next week that are starting to get more ripe and almost ready to be eaten, which means that they wouldn't last long enough in the distribution cycle and wind up being trashed."

Juice Loop anticipates reusing 300 tons of fruits and vegetables by the end of this year and 525 tons in 2018. Its operations are designed to take care of all of the waste — even the leftover fruit pulp is reused to make organic pet food.

The company also has a Safe Quality Food (SQF) certification which governs standards for ensuring their products are fit for consumption.

And all of their bottles are made in Quebec with recycled materials.

To kick off its operations, Juice Loop says it anticipates opening a modest production line with about 12 employees by October. More food suppliers have reached out in search of partnerships. Eventually, Juice Loop hopes to expand to Ontario and the rest of Canada.

After hailstorm, berries are salvaged for juice

Last month, for example, a hail storm pounded down on the Quebec City suburb of Saint-Nicolas. Twelve hours after the downpour, there were still piles of the icy rocks covering the fields of the community, roughly 23 kilometres west of the capital.

The extreme weather caused significant damage for local farmers, who in some cases, estimated losses of up to 25 per cent of their crops, TVA reported last month. Some of these farmers were suppliers of Courchesne Larose.

The extreme weather would have forced them to throw away some 10,000 pounds of strawberries, the company estimated. But thanks to the emergence of Juice Loop, the producers were able to sell the damaged berries for juice.

Up to 40 per cent of food trashed: Recyc-Québec

In Canada, the food distribution chain is responsible for 53 per cent of food waste. Between 30 and 40 per cent of food is thrown away in the country, according to Recyc-Québec, a provincial government agency.

Waste also winds up costing governments and taxpayers a lot of money, and the City of Montreal says that it collects up to 720 litres of organic trash from businesses each week, based on a municipal ruling, but it declined to say how much that costs. If there is additional waste, these businesses needs to hire private contractors to take care of it.

The consequences of food waste on climate change have been well documented. The Food and Agriculture Organization of the United Nations estimates that the energy needed for the production, harvesting, transporting, packaging of all the world's wasted food generates more than 3.3 billion metric tons of climate-polluting carbon dioxide annually.

This means that if food waste were a country, it would be the third largest emitter of greenhouse gases behind the U.S. and China. Countries are also searching for solutions to meet the demand of a growing population in a changing climate where extreme weather is hammering the agricultural industry.

Some research has concluded that improvements in food management would also be an effective method of reducing emissions. The Potsdam Institute for Climate Impact Research, for example, has found up to 14 per cent of greenhouse gas emissions from agriculture could be avoided by making improvements to food use and distribution.

The Quebec government's sustainable development strategy recognized that reducing food waste is a key part of its climate change goal of reducing annual greenhouse gas emissions by 20 per cent below 1990 levels by 2020. The province is also giving financial support to innovative projects through Recyc-Québec and a special government fund for green projects called the Fonds verts.

The Fonds verts gets its main revenue from the sale of greenhouse gas emission credits, purchased by companies for use on Quebec's cap and trade market for carbon pollution. Companies buy credits in order to meet their targets for emissions reductions and can sell them on the market if they have exceeded targets.

"Sustainable management of waste is a tremendous challenge," said Quebec Environment Minister David Heurtel during a recent announcement in Joliette about reducing waste. "To face this issue, we need to have the participation of all stakeholders...On this file, the status quo is not an option and we must all move forward together."

Several schools, private and community organizations were invited to apply to Recyc-Québec to get grants for food waste reduction. Until now, only Juice Loop, Food Banks of Quebec and Moisson Québec, which is the only food bank in the region of Quebec City, have received funding. Additional recipients are expected to follow.

“Food waste raises several issues linked to, among other things, the fight against poverty, environmental impacts of the burial of organic material and the socio-economical costs induced by this waste,” said Claudia Durocher, director of communications for Quebec's ministry of sustainable development, the environment and the fight against climate changes, in an email.

Juice Loop received about $400,000 from the Quebec government in June and plans to use this investment to build its production line.

Alexander Guerra, a spokesman for Recyc-Québec, said Juice Loop's operations were "innovative" and fit in with the provincial agency's mandate.

"It sets an example for healthy and responsible management of waste, which, in addition, contributes to reducing greenhouse gas emissions," Guerra told National Observer in an email.

The innovative business model behind Juice Loop benefits all sides of the equation: Courchesne Larose transforms a financial loss into profit and Juice Loop gets its supplies at a lower price.

“How come no one has done this before? It’s so logical,” said Poitras-Saulnier. “And on top of that, (Courchesne Larose) had been spending millions of dollars throwing away these products because it costs about $100 per rack to bury them.”

Another series of questions

Another series of questions that comes to my thrifty taxpaying mind is, " If companies in Quebec can do this, why can't those in B.C.? Is there something in the eastern air that revitalizes the innovative mind? Has Quebec been wasting more fruit and vegetables per capita than B.C. has?" Somehow I doubt it.

By Riley Sparks | News | May 4th 2017
Race Against Climate Change