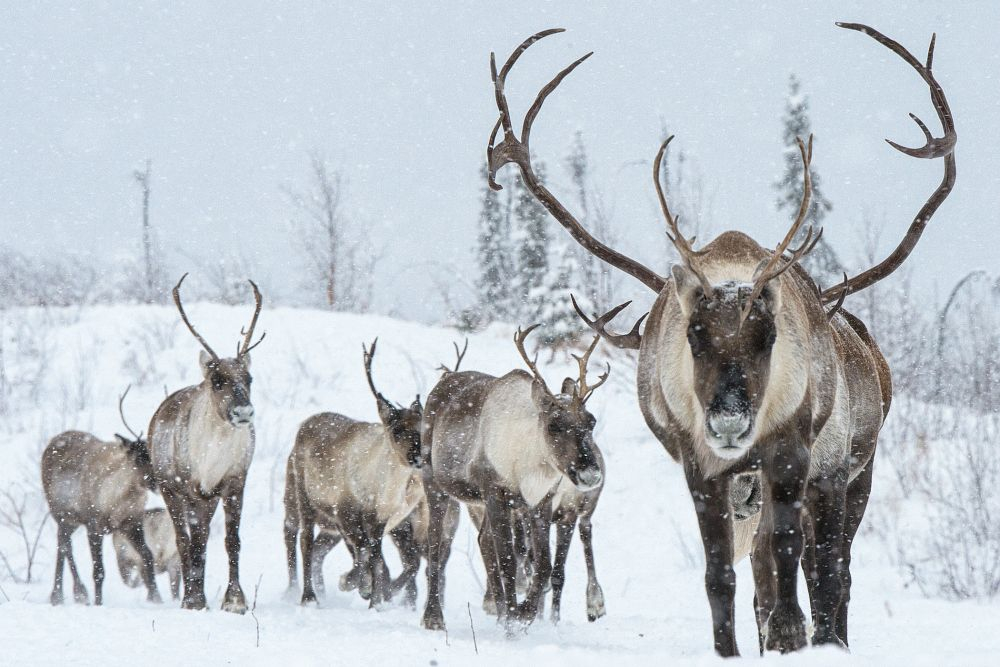 The fate of Canada’s iconic boreal caribou — a species whose numbers have dwindled so low they’re known as “the walking dead” — may hinge on a federal plan conservationists argue is a little too late.

Environment and Climate Change Canada on Thursday released a proposal to save the elusive, endangered creatures, which have graced the back of Canadian quarters for decades. But it places too much emphasis on collecting additional research, argue advocates, instead of creating concrete measures to rope off critical caribou habitat from industrial development.

If habitat disruption — including logging, mining and natural gas development — continues at its current rate, government scientists estimate Canada could lose 30 per cent of its remaining caribou within 15 years. As it stands, some boreal herds have fewer than 20 members left and only 51 herds remain in all of Canada.

“Time is not on our side in this issue,” Anthony Swift, Canadian project director for the Natural Resources Defense Council, told National Observer. “The reality is that more information would be helpful, but we know enough today to act.”

Environment Canada acknowledged that its plan “is partial,” as complete fulfillment of its requirement to protect caribou under the Species At Risk Act (SARA) rests on the completion of provincial caribou plans that are due in October 2017. All provinces and territories are obligated to conserve the species on their own public and private lands.

But as those plans are developed and implemented, and the first phase of the federal action proposal focuses on undertaking additional study, the clock is ticking on some of the country’s most vulnerable herds.

Boreal caribou, also known as woodland caribou, have been inching closer to extinction for decades as human activity, including cattle ranching, logging, mining and oil and gas development have forced them out of their preferred old forest habitats. They are found across the country, and inhabit the boreal forest from Yukon and British Columbia to Labrador.

The ungulate species, naturally a slow reproducer, susceptible to heat stress, and picky with its food and living space, is also vulnerable to the impacts of climate change, including increased wildfires and temperatures.

“By the time the populations become very small, we call them ‘the walking dead,’” said Ian Thompson, a research scientist on ecology and biodiversity for Natural Resources Canada. “The only way you can maintain populations is by eliminating as many threats as you can possibly eliminate.”

Some provinces, including British Columbia and Alberta, have implemented controversial wolf cull plans in an attempt to reduce the number of predators in sensitive caribou habitat. Others, including Quebec, have drafted plans for captive breeding programs (that plan has since been abandoned).

Brent Wittmeier, a spokesman for Alberta Environment Minister Shannon Phillips, said the new federal plan shows that Canada now takes caribou protection seriously and that it could exercise powers with significant consequences that could include the "shut down" of local industry in the absence of credible range plans.

He added that Alberta's NDP government was now working on its own solutions based on the most recent monitoring and mapping information.

"In the absence of leadership on this issue from previous administrations, our government immediately began working on caribou policy in 2015," Wittmeier told National Observer in an email. "Throughout the process, Alberta remains committed to striking the right balance between protecting our jobs and providing long term economic stability for both forestry and the oil and gas sector."

The government launched community consultations in June, prior to preparing draft plans expected in the fall, he added.

"Each caribou population is different, so blanket solutions will not work. In 2016, we released a draft plan for the two most at-risk populations in Alberta – the Little Smoky and A La Peche – which set the set the stage for range planning for the other 13 populations in the province," Wittmeier said.

Many provinces and territories have protected thousands and thousands of acres of land for caribou, but environmentalists argue such measures fall short of the mark that would save the species. While setting aside some spaces for caribou, some governments have continued to issue logging, oil and gas permits in known caribou habitat.

“The last five years have been very disappointing,” said Swift. “We’ve seen a number of measures that have been intended to ensure the protection of woodland caribou not achieve that outcome.”

Thompson, the Natural Resources Canada scientist, said it was already too late to balance industry needs with efforts to save the caribou.

"When populations become extremely low, they’re subject to a whole number of events that don’t occur in larger populations," he explained. "Most of the modeling we’ve done suggests that if the population falls below between 200 and 300, the herd will most likely continue to decline.

"We see it in small populations all across the country. When I first surveyed in Pukaskwa for example, here in Ontario, which is the national park, there were 40-some odd caribou in that park. Today, there’s maybe four."

Across the border in Quebec, Thompson said the Val d'Or population had dropped from a herd of about 200 down to 15.

Derek Nighbor, CEO of the Forest Products Association of Canada (FPAC), disagreed with the premise that industry interests — in this case logging — can't be balanced with the conservation needs of caribou. He pointed to several populations in northern Quebec and national parks in Alberta where no industry activity takes place at all, but numbers continue to dwindle.

Ultimately, he said FPAC is deeply involved in caribou protection wherever its members operate (including collaring, maternal penning, and autopsy programs) and the organization looks forward to the research that will be produced in the first phase of the new federal plan, once it is approved.

"Ecosystem management and species management is part of our DNA, so it’s really important for us that as the feds oversee this process and the provinces do their work, that we're seeing a thorough scientific assessment of what’s on the land," he told National Observer.

"I’m not totally confident that’s happening right now...If we see a provincial and federally-supported caribou plan anywhere in this country that's based on misinformation or half-science, that results in 500 or 600 people losing their jobs, I think that's really unfortunate."

He emphasized the importance of understanding the climate risk to caribou, including predator migration into caribou habitat as a result of increased temperatures, and taking a multi-species conservation approach that balances the needs of all members of an ecosystem.

The federal government plans to protect caribou habitat on its own land by spring of 2018. It also has until April 2018 to produce reports on any provinces or territories it feels are not doing their part to protect caribou ranges.

According to a 2012 national recovery strategy, all governments must leave a minimum of 65 per cent of caribou ranges “undisturbed” in order for the herds to have a 60 per cent chance of becoming self-sustaining.

The federal plan takes a three-pronged approach to conservation: science to support recovery, recovery and protection, and public reporting on progress. It includes a period of research for identifying range boundaries, climate change impacts, and a national risk management approach, followed by formalized critical habitat protection.

It also leaves space for collaboration and support between governments and Indigenous peoples to “double down” on protection efforts, said Mark Cauchi, deputy general of strategic priorities for the Canadian Wildlife Service.

“I think it’s fair to say we need innovation and unprecedented levels of collaboration,” he told National Observer. “This is not a situation where I think we need to pit interests against each other. I think frankly what we've seen is there’s a real genuine interest on all sides to help caribou.”

Chewing gum and walking at the same time

He said the federal government would not be taking a “heavy-handed” approach to provincial plans to protect caribou or dictating exactly how they should do it, but would ensure that the plans developed are legally binding and enforceable. Part of Ottawa’s proposal includes a five-year progress report on caribou populations and the development of national standards for monitoring.

Each government has a “unique situation,” Cauchi acknowledged, declining to comment on recent provincial decisions to issue permits for industrial activity in caribou habitat. Asked to respond to environmental groups’ criticism of the initial research phase, he emphasized the importance of having adequate evidence at hand to make decisions.

“I think to be honest, most environmental groups want to take a science-based approach,” he said. “We would agree that the need for more science does not remove the ability of jurisdictions to make progress on this issue. Can we walk and chew gum at the same time? Probably.”

Eric Reder, Manitoba campaign director for the Wilderness Committee, didn’t buy Cauchi’s defence. Scientists have known since 1993, he argued, that human interference with habitat is the primary driver of caribou decline, and the time for study has long since passed.

“It looks like work that should have continued after the recovery strategy in 2012, so this looks like it would have been a great document to see four years ago,” he told National Observer.

“In the meantime we're going to continue our industrial development after we do some more science. If they said that at the same time as they halted development in caribou habitat, even if it was a moratorium for one year until they had the studies and had done the science… that would be one thing, but that’s not what’s being said here."

Provincial governments, he added, have continued to favour less effective means of conservation, including placing pregnant mothers in pens and killing wolves, than simply preserving habitat.

Editor's Note: This story was edited at 5:21 p.m. Eastern Time on Mon. July 31, 2017 to clarify that while the Government of Quebec had drafted plans to relocate an endangered caribou herd to a zoo, it has since abandoned those plans.

So long as we continue to

So long as we continue to value fossil fuels beyond intact, and undisturbed ecosystems we will continue to doom all species, including ourselves eventually. Those who can see beyond the end of their noses must admit that WE are the walking dead as well. The problems to save all life on earth are legion and will continue to increase in number until we can GLOBALLY decrease OUR numbers, and that seems to depend upon the leadership of a United Nations which is less united and effective every passing day. As a species we don't seem to understand simple concepts like "carrying capacity", and so we are already way beyond our "shelf life". Face it folks, from a Darwinian point of view we're just a woeful experiment. Woodland caribou along with the rapid disappearance of 40% of other species are caused by the uncontrolled increase in human populations demanding an increasing share of resources on a finite planet, a pale blue dot in the cosmos.

Meanwhile the federal government still hasn't reversed the 2012 gutting of the former Navigable Waters Act. All that changed was the name - leaving much of our lakes and rivers in Canada unprotected, polluted, poisonous for all wildlife, including caribou. It is now administered through Transport Canada, as the Navigation Protection Act (no 'water' in the title).

The Green Party, Elizabeth May, say the Liberals are 'better' than the Conservatives.
I've seen little to support that premise.
Just mice voting for Black Cats or White Cats.
Meanwhile the places where we live become unliveable.
Can we change our species' habits?