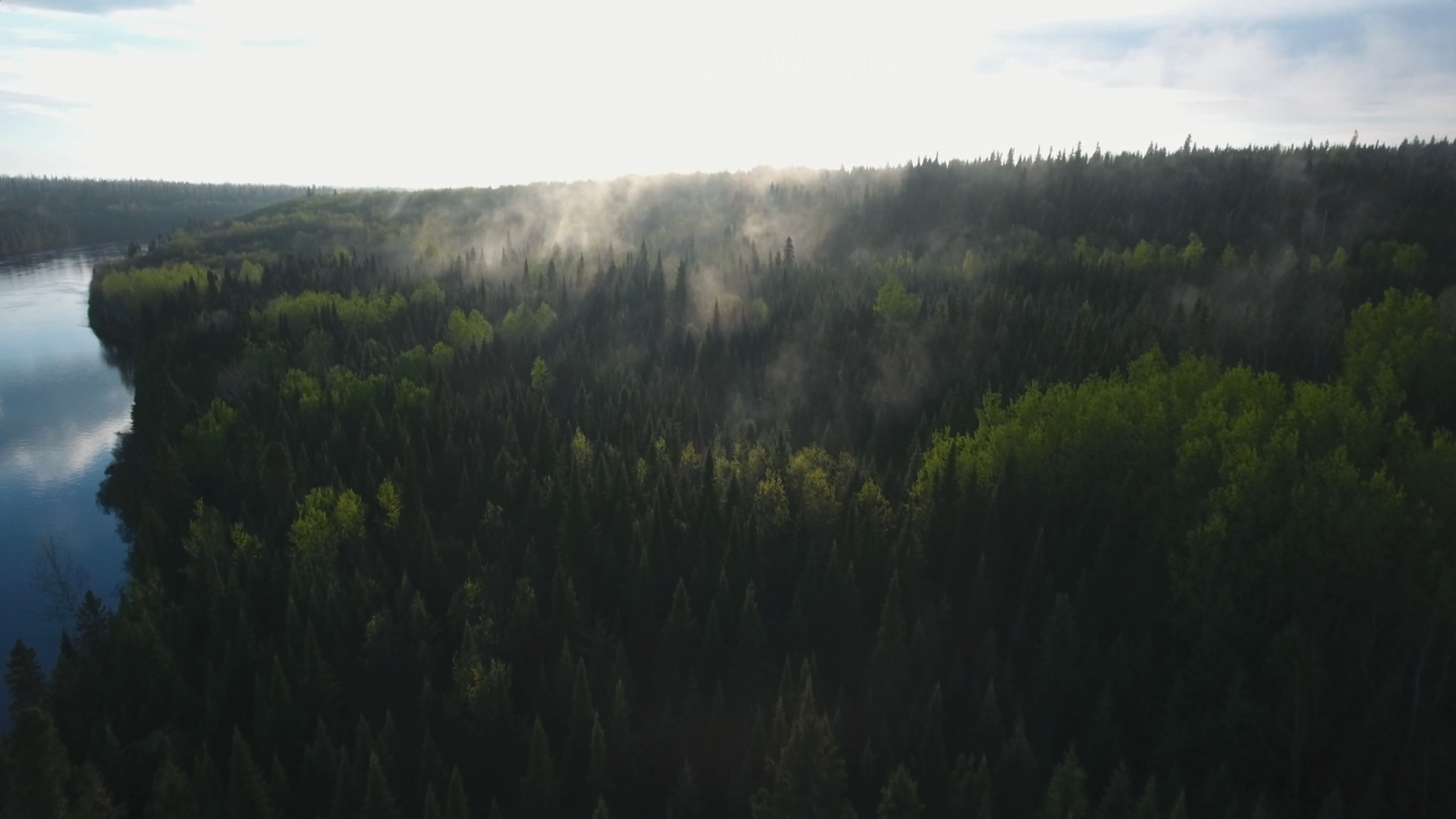 Most of the Broadback River valley in northwestern Quebec has been untouched by logging, and it is an important habitat for caribou. Photo by Natural Resources Defense Council
Previous story
Next story

News this week that there are no more than 15 caribou left in a threatened herd near Val d’Or, Que. is giving new urgency to the fight to protect caribou in the neighbouring Broadback River valley.

It also adds fuel to the dispute between the Waswanipi Cree of northwestern Quebec and forestry companies planning to build new logging roads this summer that would reach into about 1,100 square kilometres of logging areas in the forests south of the Broadback River.

New research from the Quebec Ministry of Environment shows that no more than 15 of the woodland caribou in the Val d’Or herd are still alive — a 50 per cent decline since five years ago. Much of their habitat has been disturbed by logging and human activity, according to research by the Quebec and federal governments.

And unless the province and forestry industry learn from the devastation of the caribou in Val d’Or, the same thing will probably happen to the caribou in the Broadback River region in western Quebec, according to Pier-Olivier Boudreault, director of conservation and forestry at Société pour la Nature et les Parcs du Canada. He and a handful of other environmental organizations, including the Natural Resources Defense Council, agree that any new development or forestry in the area could critically threaten the dwindling caribou population.

“The problem in this region is that the disturbance rate is already high enough to have an impact on the population, so whatever you add there is going to cause problems," he told National Observer in an interview.

Two new roads scheduled for construction in June this year will only further disrupt caribou habitat, he said. When finished, the two roads will give logging companies access to about 1,100 square kilometres of boreal forest near the Broadback River valley.

The Broadback River flows into the southeastern end of James Bay in western Quebec, northwest of Val d'Or.

Members of the forestry industry say the roads are necessary to their logging operations. The Forest Products Association of Canada (FPAC) and Resolute Forest Products, one of the companies working on the project, say logging is critical to the region’s economy and, if practiced sustainably, can maintain the long-term health of the forest.

FPAC and representatives of the Ontario and Quebec forestry industry associations defended the project in a letter in February to the Natural Resources Defense Council, an environmental advocacy group that has campaigned against the project.

“Forests of different ages support different plants and animals, making the disturbance and renewal of old-growth trees and stands an essential part of the maintenance of biodiversity and ecosystem function,” FPAC and the Ontario and Quebec industry associations wrote in February. “Only through sustainable and responsible forest management can these forests stay intact.”

The plan approved by the Quebec government last fall doesn't allow the roads to reach as far into the woods as the five forestry companies with operations in the area had originally planned. But under current plans, the roads will cut through 38 kilometres of the boreal forest, giving companies access to more logging territory just south of Quebec’s northern limit — the line above which forestry companies are prohibited from working.

They will also cross the territory and hunting grounds of the Waswanipi Cree, who have already seen almost all of their traditional territory impacted by logging and mining.

Boreal caribou in decline across Canada

In Val d’Or, captive breeding has been used to try to give the caribou population a chance to come back, but Boudreault said that battle is already lost. It's better to divert resources somewhere else, he explained, where there's still a chance of making a difference.

“What the science tells us is that it’s probably not going to work,” he said. “These extreme conservation measures can work for a while, but at some point, you have to get a suitable habitat back. That could take as long as 50 years, so for this specific situation… many people think it’s not viable, and I’m one of those.”

Three populations of caribou currently live in the James Bay area, but recent research from the Quebec and federal governments suggest that none are likely to survive in the long-term without immediate intervention. Research commissioned by the Quebec Ministry of Resources in 2012 showed all three populations had been declining for at least a decade and were continuing to shrink largely because of habit loss from logging and human activity in the region. The report recommended that the provincial government immediately end, or at least “strictly minimize,” all development in all areas occupied by caribou and begin efforts to restore the area.

"In order to ensure a reasonable likelihood of success at this juncture, the best course of action would be habitat restoration," the report noted. "Further landscape disturbance will likely perpetuate the downward spiral of these populations."

Across the country, federal government data suggests that 81 per cent of boreal caribou populations are in decline, with a 30 per cent decline in population predicted in the near future.

One of the biggest risks are logging roads, like the ones expected to be built in June. "When you have forest roads, the caribou’s predators, which are wolves and bears mainly, use the roads and this has an indirect effect on caribou. It raises the chance of wolves meeting caribou and attacking calves," Boudreault explained.

And while other parts of the forest may grow back over time, logging roads often remain in use and continue to carve up the habitat. “The resulting habitat is always more fragmented than it was at first,” he said.

With such a high rate of disturbance, research suggests caribou populations in the James Bay area will continue to decline and eventually disappear, he said. But unlike the Val d’Or herd, the caribou in the Broadback River valley aren't doomed yet: “What it says is that it’s really time to act to protect these populations, before any further disturbances are added.”

That’s a concern shared by the Natural Resources Defense Council (NRDC), one of the environmental advocacy groups pushing for conservation of the valley. The organization is concerned about increasing logging in the boreal forest, where some of the richest areas — areas that maintain the biodiversity of the forest — are under threat.

Quebec needs to produce a “credible caribou recovery plan,” he said, adding that NRDC wants the Quebec government to protect the Broadback River valley and to continue discussions with the Waswanipi Cree about increasing protections for their territory. A recent video from the NRDC featuring the Waswanipi Cree’s concerns about forestry on their territory has attracted strong criticism from the forestry industry.

In the video, members of the Waswanipi Cree talk about the importance of the land to their way of life and their concerns about disturbances from increased development in the area. The First Nation could not be reached for comment in time for publication of this story.

Members of the Waswanipi Cree Nation call for sustainability and accountability from logging companies aiming to operate on their traditional territory. Video courtesy of Natural Resource Defence Council

The Forest Products Association of Canada and the Ontario and Quebec forestry industry associations are accusing the NRDC of using “alternative facts” in their campaign to protect the Broadback forest.

In their letter to the NRDC in February, they note that a small portion – 0.2 per cent – of Canada’s total forest area is logged every year. "The pines, firs and poplars of the boreal will only live at most for a few hundred years, even in an undisturbed region," the letter notes, adding that many of those trees will be affected naturally by bugs or forest fires.

According to a spokesperson for Resolute Forest Products, one of the five companies involved in the road construction project, the NRDC’s criticism relies on “misinformation.”

The forestry company is already involved in two large defamation lawsuits related to its logging operations in the boreal forest. Last year the company filed a $300-million lawsuit in the U.S. against Greenpeace and the environmental organization Stand, under the American Racketeer Influenced and Corrupt Organizations Act, a federal law usually used against criminal organizations. Greenpeace has described the lawsuit as an intimidation tactic intended to shut down Resolute's critics.

The company also sued Greenpeace in Ontario in 2013 for defamation in relation to accusations that Resolute had broken the Canadian Boreal Forest Agreement, an accord signed in 2010 between forestry companies and environmental organizations. Many of those organizations, including Greenpeace, have since left the agreement. Greenpeace apologized and retracted the allegations, but months later Resolute sued, asking for $7 million in damages.

Kursman, the Resolute company spokesperson, said forestry is crucial to the economy of many northern communities: “People’s lives are being destroyed by this kind of thing. This is not a game. People’s lives and livelihoods are at stake."

But Swift of NRDC said environmental conservation in the region doesn't have to mean losing out on jobs and prosperity.

“One of the first things we have to tackle is this misconception that the economic future of Canada’s northern communities and the environmental sustainability of the boreal forest and its critical ecological functions are at odds, because they are not,” Swift said. “There is a way to preserve both, just as there is a way to lose both.”

Lawsuits (SLAPP suits) are becoming the first line of defence for corporate bullies like Kinder Morgan and logging companies. Instead of talking to resolve the issues, they seek to crush all those daring to speak up. Governments are breaking laws and colluding with corporations. The scales of Justice are broken and she weeps for the world.