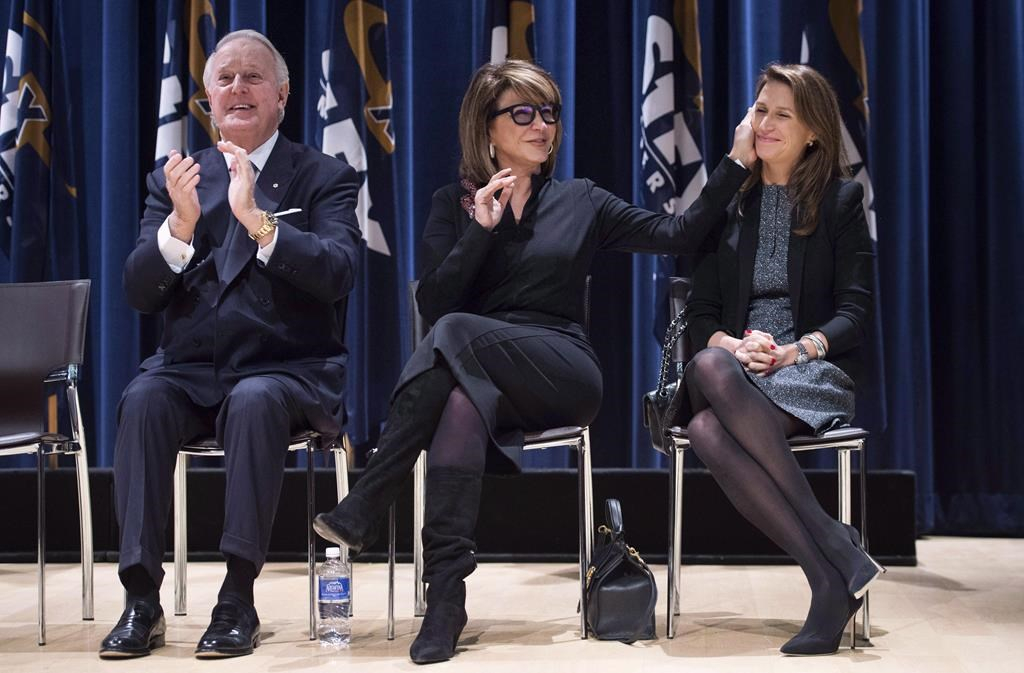 Brian Mulroney with wife Mila and their daughter Caroline Mulroney during the announcement of the $60-million Brian Mulroney Institute of Government at Mulroney Hall on Oct. 26, 2016. File photo by the Canadian Press/Darren Calabrese
Previous story
Next story

Caroline Mulroney has officially made the jump into politics.

"I love this province and I believe in a better future for Ontario," Mulroney said in a new video that she posted online on Wednesday.

I am seeking the @OntarioPCParty nomination in York-Simcoe. Learn more about why I'm running: https://t.co/cEJyPq2q0B #onpoli #pcpo

"As a working mother of four, I know we need change," Mulroney said in the video. "I want people to have the opportunity to thrive and build a better future for themselves and their families. government needs to get out of the way, focus more on affordability, manage taxes properly, so we get the services we expect. I'll stand up for you and work for a better future for your family."

Munro, the retiring MLA, tweeted that the new politician has her full support.

Congratulations on your decision to seek the nomination! You have my full support. https://t.co/YvDHCwHhIV

Caroline Mulroney first dropped hints about her plans to enter politics in May when she was picked as a master of ceremonies for the federal Conservative party leadership convention in Toronto.

"I think politics is definitely something that I've always thought about as a career," she told CBC news in an interview at the time. "And what I've learned from watching my father and so many of our friends participate in it, it's all about timing and opportunity and getting all those things right."

Party leader Patrick Brown wrote on Twitter that he is "thrilled to see such exceptional individuals like (Mulroney) step up to seek a nomination" for the party.

I am thrilled to see such exceptional individuals like @C_Mulroney step up to seek a nomination for the @OntarioPCParty. #onpoli

The meeting where Mulroney will learn if she has secured the nomination to run in York-Simcoe is set for Sept. 10. The provincial election will be held in June 2018.

Mulroney is the vice-president of Toronto-based BloombergSen Investment Partners.

Formerly, she worked at a venture debt fund, as a lawyer in New York City, as the associate director of the New York University Center for Law and Business, and an analyst in investment banking at Bear Stearns & Co. Inc.

She also co-founded the Shoebox Project for Shelters, which collects and distributes gifts to women who are homeless or at risk, and is on the board of directors of the Hospital for SickKids Foundation and the Fraser Institute.

Mulroney also used to be a member of the board of directors of the Windsor Detroit Bridge Authority.