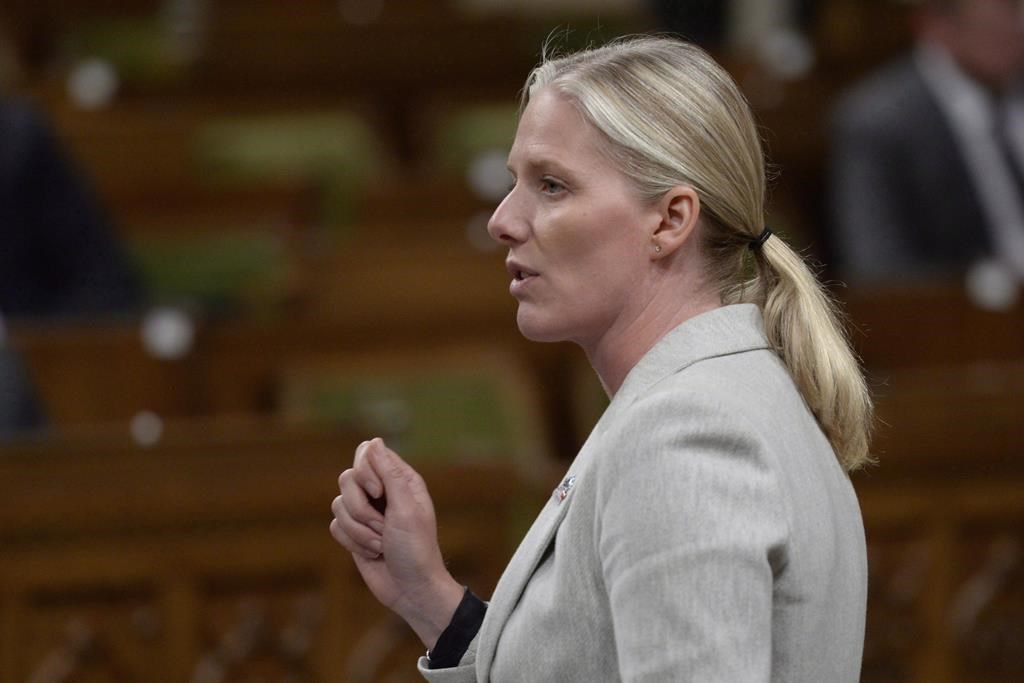 Environment Minister Catherine McKenna's office says Canada's “efficiency” of stratospheric ozone monitoring hasn’t changed as a result of two monitoring stations being cut under Harper that have yet to be restored. Photo by the Canadian Press
Previous story
Next story

Five and a half years ago, a mustachioed Justin Trudeau rose from his seat in the corner of the House of Commons opposition benches to challenge the Harper government on “cuts” to scientific research.

“Mr. Speaker, I have a simple question on ozone monitoring, based entirely on what the minister of the environment himself has already said,” Trudeau declared on Nov. 24, 2011.

The Liberal MP for the Montreal riding of Papineau then flashed a document signed by Kent that contradicted the Conservative minister's position. “Hopefully not an unreliable source,” he quipped.

Justin Trudeau, then in opposition, challenges Peter Kent, then the environment minister, about the Harper government's cuts to ozone monitoring on Nov. 24, 2011. House of Commons video

It was a sly reference to the day before, when Kent had told then-Liberal environment critic Kirsty Duncan she should "use more reliable research" after she questioned the Tories over a briefing note titled—fittingly enough—“ozone monitoring cuts.”

Trudeau and Duncan would spar with Kent several times that week over the issue.

At one point, Trudeau even challenged Kent by asking whether he knew what ozone actually was.

"I just need to know that he understands the issues," Trudeau asked.

The Liberals are in power, Trudeau is prime minister and Duncan is his science minister. Kent has swapped positions with them on the opposition benches, assuming the mantle of foreign affairs critic for the Conservatives.

With the science-defending duo now at the controls, Canada boasts about scientific breakthroughs in ozone research, and the government claims it is unmuzzling scientists, undergoing a fundamental science review, launching a search for a chief science advisor and creating a $2-billion investment fund for post-secondary institutions, among other initiatives.

Trudeau's cabinet launched these initiatives after campaigning in the 2015 election to restore evidence-based decision-making in government. This followed years of criticism that the Harper government was putting science on the back burner and making decisions that benefited the oil and gas industry in Western Canada, where the Conservatives have deep political roots.

The criticism culminated with scientists mourning the "death of evidence" in a mock funeral march on Parliament Hill to protest the Harper government in July 2012.

One might be tempted to think that after all this, the cuts to ozone monitoring would have been restored. The reality, however, is more complicated.

In responding to National Observer’s questions, raised in June, about whether the cuts had been restored under the Liberals, a spokesman for Environment and Climate Change Canada first denied that cuts had ever been made.

After further questioning, Environment Minister Catherine McKenna's office would later acknowledge in July that ozone monitoring stations had indeed been closed. But her spokeswoman would still argue that the “efficiency” of monitoring hadn’t changed as a result.

Kirsty Duncan, then the Liberal environment critic, challenges Kent about the cuts to ozone monitoring on Nov. 23, 2011. House of Commons video

The reaction to this chain of events has been one of frustration or vindication, depending on who's reacting.

Thomas Duck, an associate professor in the department of physics and atmospheric science at Dalhousie University, said the government's claim in 2012 under former prime minister Stephen Harper—that Canada could sufficiently monitor ozone while still closing monitoring stations—reminded him of the position it was now taking under Trudeau.

"Does the Trudeau government really want to take ownership of what Harper did?” said Duck.

The NDP said the Liberals weren't honouring their commitment to restore scientific integrity in government post-Harper. “The Trudeau government thinks they’ve kind of ticked the science box on their to-do list and now they’ve moved onto other things,” said science critic Kennedy Stewart.

Duncan and Trudeau question Kent about the cuts to ozone monitoring on Nov. 21, 2011, kicking off a week in which they would repeatedly question the then-environment minister. House of Commons video

The Conservatives, meanwhile, see it as an example of the Liberals saying one thing in opposition and another thing once in government.

"Environment Canada’s scientists have apparently convinced the Liberals that the monitoring of atmospheric ozone, as amended by our Conservative government on the advice of the same scientists, is appropriate and effective," said Kent.

Duncan and Trudeau's offices declined comment. McKenna's spokeswoman, however, attempted to draw a distinction between the two governments' approaches.

“Our government has been clear from the outset that we’re taking a different path from that of the Harper government, which set targets with no plan in place to meet them, and undertook no action on climate change,” said Marie-Pascale Des Rosiers.

"Canada continues to operate one of the largest stratospheric ozone monitoring programs. This program meets our operational requirements."

‘The remaining eight are sufficient’

Canada monitors ozone both up in the Earth’s atmosphere, where the ozone layer helps block harmful ultraviolet radiation, and closer to the surface, where the reactive gas has been linked to health problems and smog.

It was cuts to atmospheric ozone monitoring that drove the controversy during the Harper government. The monitoring is done using two different technologies, brewers and ozonesondes, that measure different aspects of the ozone layer.

The statement signed by Kent during the Harper government confirmed that the two measures complement, but don’t duplicate each other. As Duncan explained in 2011, that means “they can't be optimized and streamlined—only cut."

The Harper government ended up overseeing the closure of two ozone monitoring stations, at Bratt’s Lake, Sask. and Egbert, Ont.

It also moved the World Ozone and Ultraviolet Radiation Data Centre, one of six centres that form a global atmospheric monitoring program, out of the environment department’s science and technology branch to the meteorological service’s data management system. The data centre is run by the department with the support of the World Meteorological Organization.

National Observer asked the department whether cuts to ozone monitoring had been restored. Spokesman Mark Johnson responded that the department’s “monitoring of ozone was not cut.”

“Rather, portions were transferred to another group” that “continued with the delivery,” Johnson said. "Environment and Climate Change Canada continues to be committed to research and monitoring related to stratospheric ozone." He added stratospheric ozone observations "are made at eight sites across Canada."

The problem: There used to be 10 such sites.

Duncan pointed this out in 2012, when she complained at a House environment committee meeting that activity at the Bratt’s Lake and Egbert sites had "ceased."

The status of the monitoring sites also appear on the world ozone data centre's website, hosted by the Canadian government. The website shows that Bratt’s Lake and Egbert stations stopped producing data after 2011 and have remained dark.

Johnson’s statement also confirmed that the ozone data centre was still in the meteorological service, but that “scientific oversight” is provided by science and technology branch scientists and others.

“This is why two stations were closed in 2012. The remaining eight are sufficient for robust monitoring of stratospheric ozone,” said Des Rosiers.

“Canada’s commitment to monitor stratospheric and ground-level ozone has not changed and neither has the efficiency of the monitoring.”

National Observer then asked the department for a copy of the analysis mentioned by McKenna's office.

It declined to respond, but Des Rosiers followed up with an email saying that the government was "committed to science" and that it didn't receive "negative feedback" on the Canadian ozone monitoring program at a recent international conference of ozone research managers hosted last March in Geneva, Switzerland.

Dalhousie's Duck questioned how the department could claim that it hadn't lost a valuable resource in the shuttered Bratt's Lake and Egbert stations.

He pointed to two scientific papers released last year that both reference data from the Bratt's Lake and Egbert stations. One paper was led by the environment department, while the second was from an international collaboration. "Clearly the data are of continuing scientific importance," he said.

Duck, who says he co-founded a university consortium that took on responsibility for an instrument that was jettisoned in the Harper-era restructuring, also argued there were other scientific reasons for wanting launches of ozonesondes, a type of weather balloon, at the two stations.

In addition to ozone, ozonesondes can also be used to examine atmospheric pollution like emissions from oilsands, or pollution around Toronto, he said. They help differentiate between ground-level and ozone-layer sources, argued Duck, but "the loss of these two stations impacts our ability to do that."

He said Bratt’s Lake was "the only ozonesonde station immediately downwind from the oilsands." Although there is an operating station in Edmonton, geographically closer to the oilpatch, winds tend to blow from west to east, putting Bratt's Lake more downwind in terms of weather patterns, he said.

A network of stations would be the best approach, he argued, but "given how few stations there were around the oilsands to begin with, the loss of Bratt’s Lake [is] really grievous."

At the same time, Egbert was the only ozonesonde station in the vicinity of Canada’s most-populous city, Toronto, he said. Taken together, "This suggests to me that the stations were cut for non-scientific reasons," said Duck.

Finally, he questioned the assertion that the ozone data centre had true scientific oversight, arguing a drop in data demonstrated otherwise.

“Usage of the centre has declined since the management changes in 2012,” he said, pointing to the centre’s own data for Brewer Ozone Spectrophotometer, a Canadian invention used around the world to measure UV, that shows a drop-off since 2012.

Johanne Fillion, communications officer at the Professional Institute of the Public Service of Canada, said the ozone monitoring cuts were an example of prioritization in Ottawa.

“Our feeling is that with ozone, it’s not because they don’t care, it’s because it wasn’t the top priority when they arrived [in government],” she said.

But Kent said "sarcastic questions and denunciations" from the Liberals in 2011 over atmospheric ozone monitoring were "uninformed and wrong."

"Their statements today are in line with any number of policy positions in opposition that Liberals now contradict," he said.

For his part, Stewart said the Liberal government isn’t waging a “war on science,” but he said their policies have “almost all the same effects of Harper’s war on science.”

He said federal scientists appeared to be ecstatic that Harper was gone, but he is now starting to field calls from some of them who are concerned that longstanding policies haven’t changed.

—With files from Mike De Souza