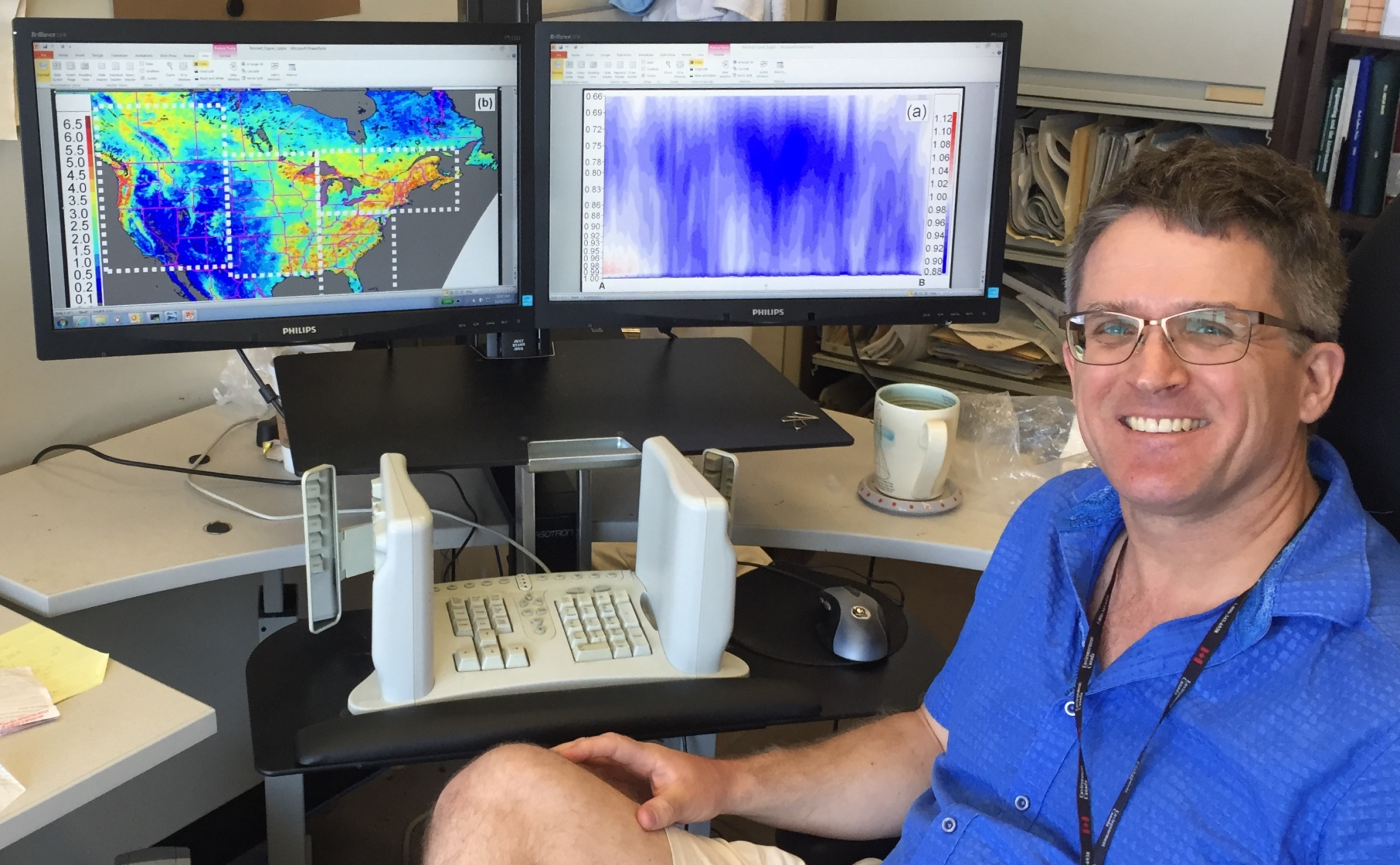 Environment and Climate Change Canada scientist Paul Makar sits at his desk in front of forecast models showing the extent of ozone gas across Canada and the United States. Photo courtesy of Paul Makar
Previous story
Next story

It was a Tuesday in early February 2015 when Sylvie Gravel walked into her colleague Paul Makar’s office carrying printouts that would mystify both of them.

The two scientists at Environment and Climate Change Canada were staring at computer model forecasts of ozone gas. Up in the Earth’s atmosphere, the ozone layer helps block harmful ultraviolet radiation. But closer to the surface, the reactive gas has been linked to health problems and smog, so the federal government department monitors it in air quality forecasts.

The problem was that the forecasts were way off. The computer model had predicted significantly more ozone across Eastern Canada and the United States than what was actually observed in the air. Something wasn’t being factored in—but what?

“I did not understand the behaviour, and I said, ‘Do you see any reason why we would see something like that?’” Gravel recalled asking Makar. She left the graphs with him to mull over.

Makar spent several days pondering what could be so special about that part of the continent that it would affect ozone production in such a profound way. He went home that weekend, he said, with the question fading into the back of his mind.

“I basically forgot about it until five a.m. Sunday morning,” said Makar, “when I woke up with this thought going through my head: ‘Holy cow, that’s where the forests are.’”

A 'simple thing that everybody had missed'

Two years later, Makar and a team of scientists had worked out the kinks in a groundbreaking new theory: forests, with their canopy of leaves and their wind resistance, significantly decrease ozone production.

Darker environments like forests make less ozone gas, as the inorganic molecule is produced from a chemical reaction activated by ultraviolet light from sunshine. There is also less wind in forests because trees reduce turbulence, so there is a smaller chance of ozone gas getting whipped up from fresh air.

“Those two things, the shading and those [wind] eddies, we didn’t have those in any of our computer models. Nobody had them in their computer models,” said Makar. The same problem had been plaguing the U.S. government’s forecast model, he said.

“It’s this simple thing that everybody had missed.”

The shaded area and stagnant air result in as much as 50 per cent less ozone than if the forests weren’t there, he said. What’s more, this effect extends far into the sky above forests. Even at a height of three or four kilometres, there is sometimes 40 per cent less ozone over forests.

What that meant is that deforestation just took on a whole new importance.

Not only do forests suck carbon dioxide from the air, helping to counteract the greenhouse effect that is furthering dangerous and destructive climate change, they also help lower smog and make healthier air to breathe by lessening ozone, a key air pollutant.

“If you get rid of the trees, what’s going to happen?” Makar recalled thinking. “This is something that I think will change the direction of air pollution science.”

'Computer nerds slapping each other on the back'

To understand how Makar and his team came to prove the effect of forests on ozone production, it’s worth looking at how air quality forecasts are compiled.

The forecast is run twice a day for North America, and compared against measurements taken by an observation network set up across the continent.

Makar said he considered that the instruments were malfunctioning, but with so many deployed, and with quality assurance processes in play, it was unlikely that they were all wrong—especially right where the forests were.

The first person he talked to was Ralf Staebler, a forest air pollution measurement expert. Staebler had the data to confirm the effect of trees on ozone, said Makar.

“You could see a seasonal signal to it: The difference was greater in the summer time, because that’s when you have more leaves on the trees,” he said.

Makar then talked to Chris McLinden, a satellite data expert. Makar asked McLinden if he had data that could show the amount of leaves in the forest. There are several new sources of satellite data that have come online in the last few years, he said.

The team needed to generate new computer code to change the forecast model to reflect the new findings—a complex undertaking. They had to essentially describe the forest mathematically, and add that code without disrupting the rest of the model.

Makar worked with Ayodeji Akingunola, a programmer who he calls his “right-hand man,” recoding the model, he said. A year and a half later, they were able to run a simulation to see the results.

“The extra ozone that the model had been making, it almost disappeared. In the Northeast U.S. and Canada, that extra ozone was reduced by 97 per cent,” said Makar.

That led to much celebration in the office: “computer nerds slapping each other on the back.”

McKenna: 'We depend on our scientists'

Makar and his team published their results in the scientific journal Nature Communications on May 18, in an article called, “The effects of forest canopy shading and turbulence on boundary layer ozone.” Environment and Climate Change Canada then promoted the study in a June 14 press release.

"Congratulations to our scientists for their excellent research that is helping us understand the importance of maintaining healthy forests in Canada,” said Environment Minister Catherine McKenna. “We depend on our scientists to provide objective information to inform decisions supporting the protection of our environment."

Canada has a long history examining ozone, from the 1987 Montreal Protocol, an international treaty to limit pollution in the atmosphere that depletes ozone, to the invention of the UV index, which is linked to measuring the ozone layer.

The next step is for Makar and his team to create a nimble new forecast model that accounts for the effect of forests on ozone into Canada’s daily air quality forecast. The earliest it could be implemented is the fall, he said.

“We have a process that we go through for approval of new components to the model,” he said. “There’s a number of things that we’re looking at.”

As for Gravel, she said her background is in meteorology. She works from Dorval, Que. and only infrequently visits her colleagues in Toronto. She left the graphs with Makar because of his focus on chemistry, she said.

“Paul is a very driven scientist,” said Gravel. “It’s not like you have to put him in a fire to get him going. It kind of triggered something, but then he’s unstoppable.”

The federal government's praise for its ozone scientists comes after reports of budget cuts and staffing changes to the department's atmospheric ozone monitoring that occurred under the Harper government.

Mark Johnson, a spokesman at Environment and Climate Change Canada, said the department considered its ozone monitoring ability to have not been cut.

"Rather, portions were transferred to another group within [the department] that continued with the delivery," Johnson wrote in an email. "Since then, there was been a modest increase in the areas monitored, in particular for ground-level ozone."

The monitoring of ground-level ozone is done through the National Air Pollution Surveillance program and the Canadian Air and Precipitation Monitoring Network, said Johnson, and such monitoring was expanded after 2011 in Western Canada, he said.

Editor's note: This story was updated on June 26, 2017 at 9:30 a.m. ET to include comments from Environment and Climate Change Canada and to clarify that the computer program in question is a forecast model, not a climate model.

If Environment Minister McKenna respects scientists and the work they do, she (and her government) should stop denying the impacts of climate change on our forests: "Canada has indicated that its accounting for managed forests towards its emissions reductions target will exclude the impacts of natural disturbances because these impacts are non-anthropogenic." ( source: Canada's Second Biennial Report submission to the UNFCCC, April 2016).
Note: Natural disturbances include wildfires, insect infestations such as the mountain pine beetle, and (more) storm-laden climate, drought, etc. Canada's managed forests cover about 2/3 of total Canadian forests.

"The anthropogenic emissions of greenhouse gases from Canadian sources in 2005 were about 747 Tg-year of CO2 equivalent (Environment Canada 2007). Under the 1XCO2 scenario, we estimate greenhouse gas emissions from fires of about 162 Tg-year of CO2 equivalent, which represents about 22% of the anthropogenic emissions, on average. However, in the 3XCO2 scenario, the fire contribution is estimated to increase to about 313 Tg-year of CO2 equivalent. Hence, the potential emissions from fire will be an important contribution to total emissions, especially if Canada's industrial greenhouse gas emissions are much lower by the time we reach a 3XCO2 environment."
(source: NRC Research Press, 2009 :"Future Emissions from Canadian Boreal Forest Fires".)
Between 2004 and 2014, the impacts of natural disturbances and the forest products sector on Canadian GHG emissions from managed forests resulted in most years in a "net carbon source". Total carbon source from 2004 to 2014 were 329 Mt (CO2 eq) while carbon removal or "sink" totalled 115 Mt. On average emissions from natural disturbances were a "source" of carbon, at around 19.45 Mt per year.
(source: NRC Indicator: Carbon emissions and removals, 2016-11-01)
Since 2008, the federal government has decided not to include emissions from natural disturbances in its annual report on Greenhouse Gas Emissions.