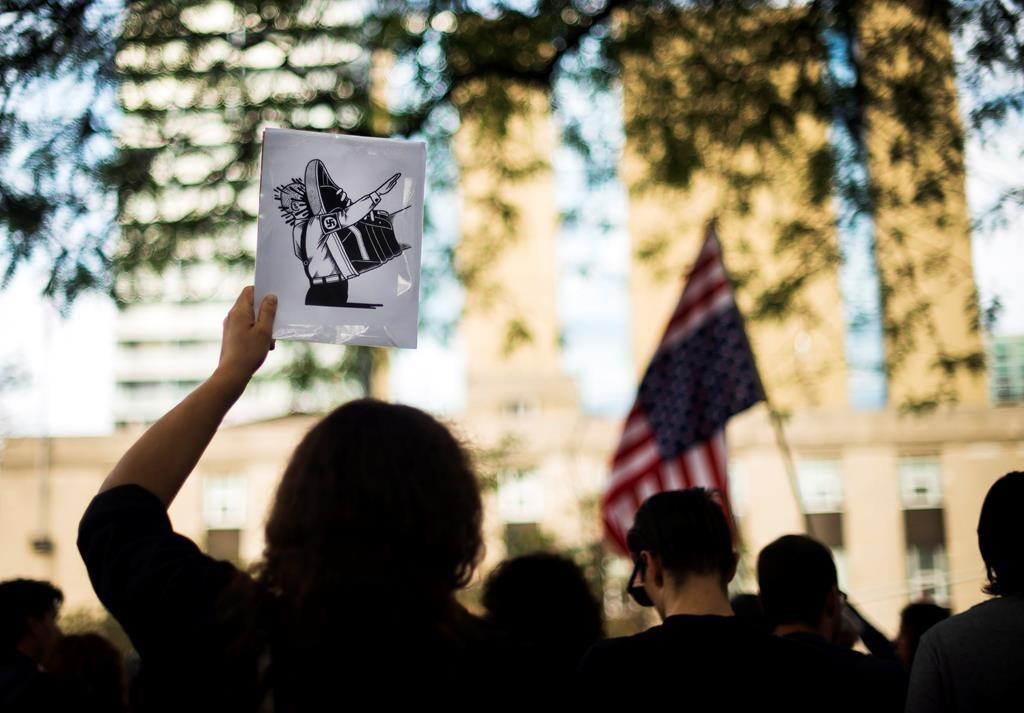 People protest against the white supremacist movement and racism outside the United States consulate in Toronto, on Monday, August 14, 2017. Photo by The Canadian Press/Nathan Denette
Previous story
Next story

Dozens of demonstrators gathered in downtown Toronto Monday morning to stand in solidarity with victims of the weekend violence in Virginia that killed one woman and injured 19 people.

Many of them held signs decrying racism as they stood opposite the American consulate to express their opposition to white supremacists.

"White supremacy is terrorism," one sign said. "Hate free zone. No child is born hating," read another placard, attached to a stroller.

Together, the demonstrators chanted: "No hate, no fear. Fascists aren't welcomed here."

The gathering came two days after a car plowed through a group of people in Charlottesville, Va., as they were protesting a white supremacist rally. James Alex Fields Jr., 20, of Ohio, was arrested shortly after and charged with second-degree murder and other counts.

Donna Gabaccia, an American professor at the University of Toronto who helped organize Monday's event, said she was "appalled" by the weekend gathering of white supremacists in Charlottesville.

"I was not surprised that violence and death was the outcome," she said. "I felt that as a U.S. citizen and white person, I need to speak out against racism (and) bigotry, and I'm here in Toronto. The consulate is the most public face of the U.S."

Jesse-Blue Forrest, a Toronto resident who is from a community near Charlottesville, said he came out to let people know that violence is not the norm in the American city. At the same time, this past weekend's events didn't just happen spontaneously, he said.

"It's been brewing for a long time," Forrest said. "I really do not want to see that cancer in the United States spreading here in Canada."

Molly Ladd-Taylor said she was "disheartened" by what's happening in the United States, especially what she called U.S. President Donald Trump's failure to immediately stand up against white supremacy.

"The president of the United States can't condemn white supremacy when somebody has been murdered," said Ladd-Taylor, a dual citizen. "It's shocking."

In the hours after the incident on Saturday, Trump offered a vague statement that referred to the race-fuelled violence in Charlottesville as an "egregious display of hatred, bigotry and violence on many sides." It drew criticism from both Republican and Democratic lawmakers for failing to call out and criticize white supremacists.

By Monday, after relentless pressure, Trump declared that "racism is evil" and explicitly condemned members of the KKK, neo-Nazis and white supremacists as "criminals and thugs."

Vanessa Campbell, a Toronto resident who attended Monday's rally, said she believed the election of Trump has made white supremacists feel that they can be "loud and proud" again.

"We need to challenge that," she said. "It's time for everyday average Canadians to stand up and fight back."

She said the recent violence in Virginia made her realize that people like herself, who generally hold moderate opinions, need to get involved in efforts to combat extreme views.

"It's just really saddening — and maddening — that there are people in the world (who) feel that they can have a voice against people of colour (and) people who are different from them," Chan said. "I just can't live in a world like that."

A vigil was held in Toronto Sunday night to remember the victims of Saturday's violence. A rally was also held in Montreal, according to social media and local media reports.