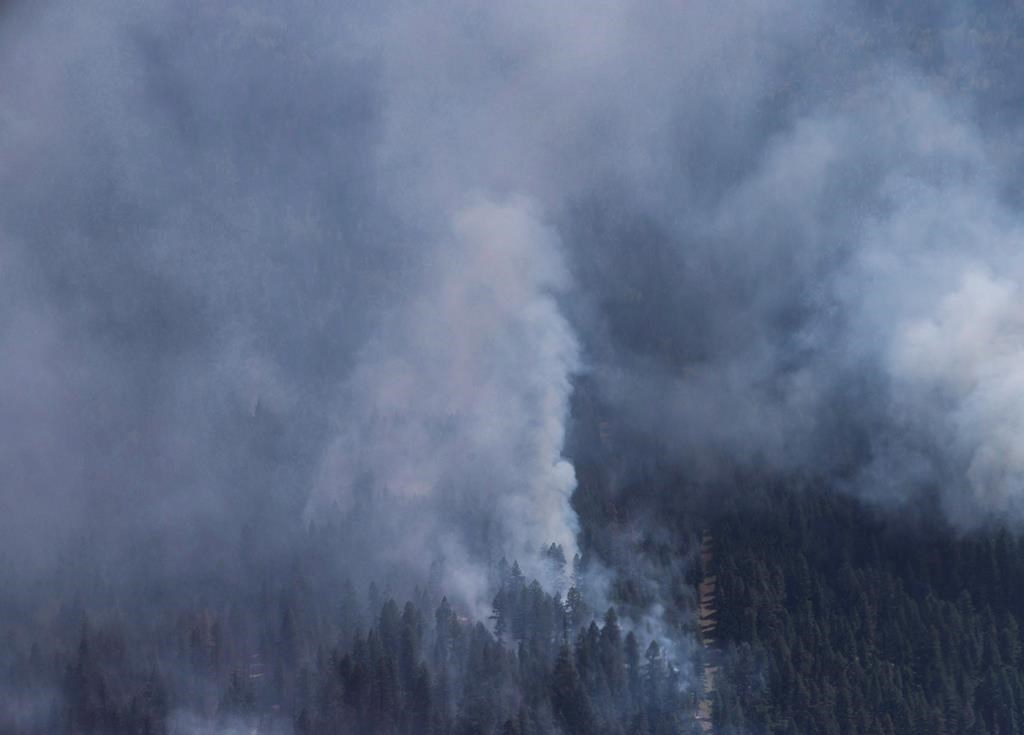 A wildfire is seen from a Canadian Forces Chinook helicopter near Williams Lake, B.C., on Monday July 31, 2017. File photo by The Canadian Press/Darryl Dyck
Previous story

British Columbia is poised to face its worst wildfire season as flames scorch thousands of hectares of land and costs rise to deal with the devastation.

BC Wildfire Service spokesman Kevin Skrepnek said an estimated 8,450 square kilometres of forest, brush and grassland has been burned since the start of the wildfire season on April 1.

"(It's) safe to say we are on track for this to be the worst season on record for that area burned," Skrepnek said.

He said 154 wildfires are burning across the province and the firefighting price tag has reached $309 million, though that figure does not include costs for the loss for 71 homes and 118 outbuildings.

"We're urging people to be extremely careful with any activity that could spark a wildfire," he said. "We're continuing to see the increased likelihood of lightning-caused fires, which makes it even more critical to avoid any human-caused incidents."

Over 4,100 people, including about 760 people recruited from outside the province, are working on firefighting efforts, Skrepnek said.

Chris Duffy, executive director of operations for Emergency Management BC, says nearly 9,300 people remain out of their homes as 40 evacuation orders are still in place.

He said 31,000 people are on evacuation alert, meaning they must be ready to leave on a moment's notice.

Evacuation orders in parts of the Cariboo have been downgraded to alerts in some areas, including Alexis Creek to Riske Creek after residents were forced to leave Sunday.

However, officials with the Cariboo Regional District said ongoing fire control activities mean access to some areas may be limited and is at the discretion of check point personnel.

"We would still urge the public to remain vigilant," Duffy said, adding the fire risk remains high. "Have an emergency plan, an emergency kit, report fires and in particular, respect orders and alerts and instructions from first responders, fire crews, highways (officials) and RCMP who are working around these fire sites."

Many returning residents have had to power wash off red fire retardant that covered their property in efforts to protect structures.

On the plus side, all that

On the plus side, all that money spent represents a noticeable boost to our GDP!
(The kind of thing that makes you wonder about GDP as a measure)