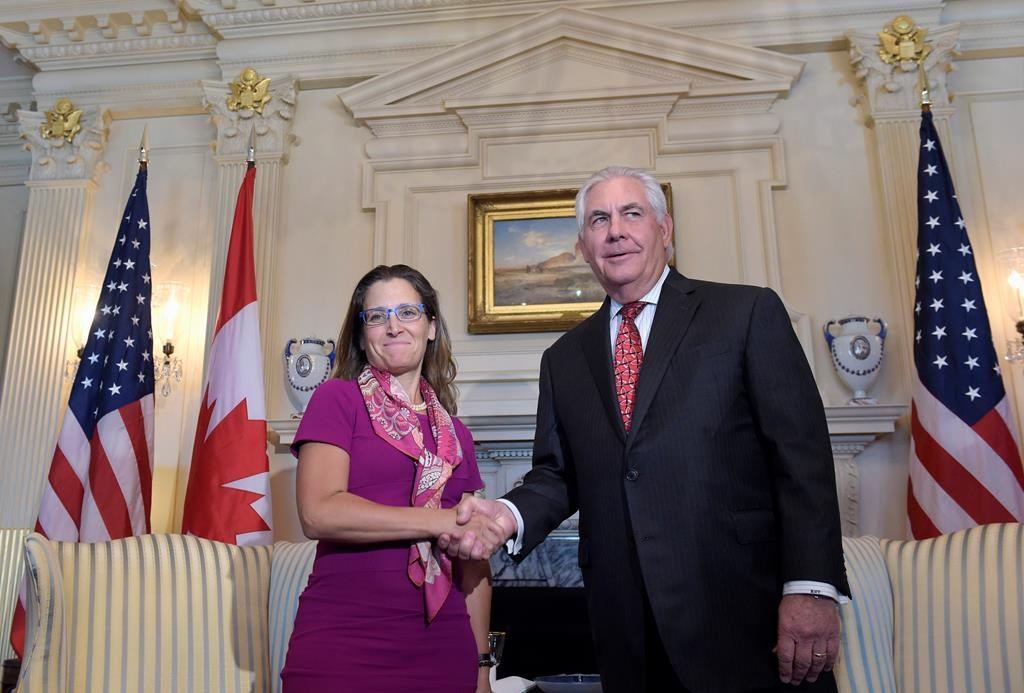 The foreign ministers of Canada and the United States have jointly condemned the racist-fuelled violence in Charlottesville, Va., with Chrystia Freeland adding that people have a responsibility to denounce such incidents..

Amid a furor over the incident and President Donald Trump's handling of it, they used a meeting to make a public statement Wednesday. Freeland was in Washington for the opening round of NAFTA talks, and she dropped in on the State Department to visit Rex Tillerson.

The secretary of state first brought it up. With reporters present in the room, he opened his remarks by noting that Canada and the U.S. are close friends with shared values — which include freedom and tolerance.

He said that's why he felt it was appropriate to address the incident in Virginia, where white supremacists gathered and a car plowed into a group of anti-racism protesters, killing one and injuring more than a dozen others.

''I want to add our own condemnation of that kind of hatred and violence,'' Tillerson said.

''There's just simply no place for that in our public discourse.''

Freeland offered her condolences and added: ''We are absolutely unequivocal in our condemnation of racist hatred.''

She said Canada is not immune to racist violence, citing the case of the recent Quebec City mosque massacre. She said: ''It's important for us to speak up publicly and condemn it, as we've done.''

Both ignored a shouted question about whether they agreed with the controversial way Trump addressed the events. The president first blamed both sides, then after a few days issued a strident denunciation of white supremacists, then expressed regret that the media weren't giving him credit, then returned to blaming both sides.

The incident has left the president increasingly isolated. Numerous members of his own party have condemned his behaviour. An exodus of business leaders from his economic advisory teams caused him to disband them Wednesday.

Just outside the State Department, a cab driver was shouting at radio broadcast on Wednesday. As a Republican tried to defend the president, Lajuan Edwards screamed: ''Come on!''

He said he feels real pain at what's happening in his country. He sees Trump's election and his behaviour, as part of a racist backlash to the fact that, for eight years, America had a black president.

"I feel awful. It's a slap in my face," said the African-American man.

"I can't believe this happened. We went from the first black president to this. It's like they said, 'You all had your black president. Now get back in your place'."