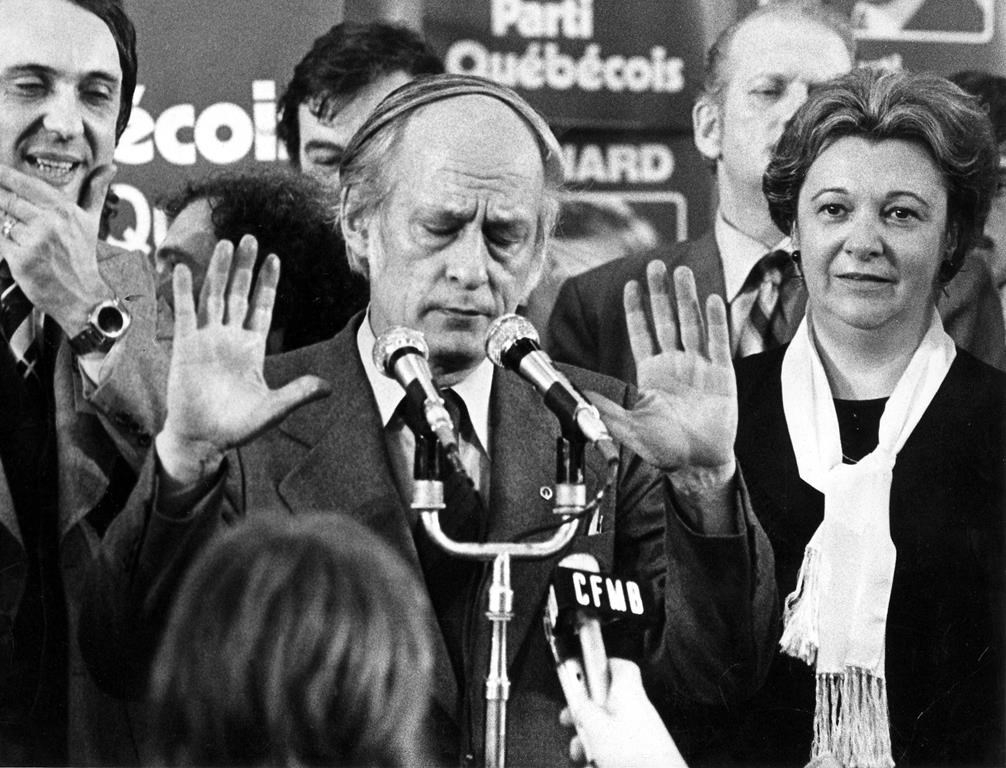 Mosher's cartoon in the English-language Montreal Gazette reflected the fears of anglophones, many of whom assumed the worst: that Quebec would soon be leaving Canada.

While that scenario never materialized, the PQ victory did lead to the landmark Charter of the French Language, which became law on Aug. 26, 1977.

Commonly known as Bill 101, the charter was widely seen as either a cornerstone piece of legislation that would ensure the survival of the French culture and language, or the cementing of second-class citizen status for hundreds of thousands of people.

And while Bill 101 was a continuation of previous legislation seeking to strengthen the French language, it was also a radical departure from the status quo.

French was to become the official language of business, government, commerce and the courts. Immigrants would only be able to school their children in French, including out-of-province Canadians moving to Quebec, and commercial signs would be in French only.

"Bill 101 dramatically altered the mindset and psyche of the anglophone community, which had never seen itself as a minority," said Robert Libman, a leading anglophone-rights advocate in the '80s and '90s and a former member of the legislature for the Equality party.

"The law clearly, clearly, established the fact that we were now second-class citizens."

But Bernard Landry, who was a cabinet minister in the Levesque government in the '70s and '80s before eventually serving as premier between 2001 and 2003, said Bill 101 was a much-needed piece of legislation.

"I remember from that time, practically all the children of immigrants went to English school," he said an interview. "It was bad for them, bad for us, bad for Quebec society. It was time to act."

Francophones, who had begun taking over the levers of power during the Quiet Revolution of the '60s, believed if nothing was done to stem the influence of English, Quebec would become anglicized — and become a northern Louisiana.

"It perfectly reached its goal of integrating, welcoming and educating young kids of immigrants," she said in an interview.

"It partly reached its goals of preserving the French nature of society and French as the common language because there is a decline in the use of French."

The fight started with a series of court challenges almost as soon as the law was adopted.

In 1984 the Supreme Court ruled it was a violation of the Canadian Charter of Rights and Freedoms to force children instructed in English elsewhere in Canada to be forced into French schools in Quebec. The court also ruled that same year Bill 101's rejection of English storefront signage was a violation of freedom of speech.

In 1985, Quebec's anglophones thought they had "dodged a bullet" when the Liberals were ushered back into power under Robert Bourassa, said Libman.

"There was a sense of relief," he said. "People thought the tide had stemmed and the Liberals would undo some aspects of Bill 101."

In fact, Bourassa did the opposite.

The premier used Canada's notwithstanding clause — which allows provinces or the federal government to override the charter — to maintain French-only outdoor signs.

"Bourassa and his wife were profoundly francophone and Quebecois and they saw the catastrophe that was coming," Landry said.

The premier's actions reinforced the notion that regardless of the political party — sovereigntist or federalist — the language laws were there to stay.

Bourassa's government relented somewhat in 1993 and passed a law allowing English to be included on outdoor signs — but only if the French lettering was at least twice as large.

Libman said Anglo-Quebecers had two choices faced with the consensus imposed by the majority: fight back or leave.

"Very few fought back," he said. "And as it wore on, those who stayed just decided to roll over and play dead."

Many anglophones did end up leaving.

Libman says today's anglophones are more bilingual, but the community "has been decimated."

He said Mosher's cartoon was interpreted correctly by those who feared the worst.

In 1971 there were 250,000 children in English schools across the province, while today there are fewer than half that number.

"Friends, relatives, our best and brightest left," Libman said. "And the opportunities here are limited for anglophones."

But Marois says she isn't worried about Quebec anglophones, for whom she has "profound respect."

"They are part of a large majority on the continent, which is not the case for francophones," she said.

If Jean-Francois Lisee, the current PQ leader, had his way, Bill 101 would soon be a thing of the past because it would be replaced by tougher legislation.

Lisee said recently that if his party wins the 2018 election, it will introduce a new, stricter language law — within 101 days — to stem what he called a worrying trend in the use of French in Quebec.

The legislation would be called Bill 202 and would force all companies in Quebec with 25 employees or more to conduct all business in French, which is currently the case for firms with 50 people or more.

Concerns about the perceived decline of French in the province are also shared by Partenaires pour un Quebec francais, a group that defends the French language and is urging the Quebec government to do more to enforce Bill 101.

It argues the government is failing in its mission to adequately defend the language.

"Unfortunately, the government is doing nothing to make sure that French is the language of the state,'' said Christian Daigle, head of the union that represents civil servants in various departments and government agencies.

"On paper, everything is fine and dandy, but in reality it's not.''

— With files from Vicky Fragasso-Marquis