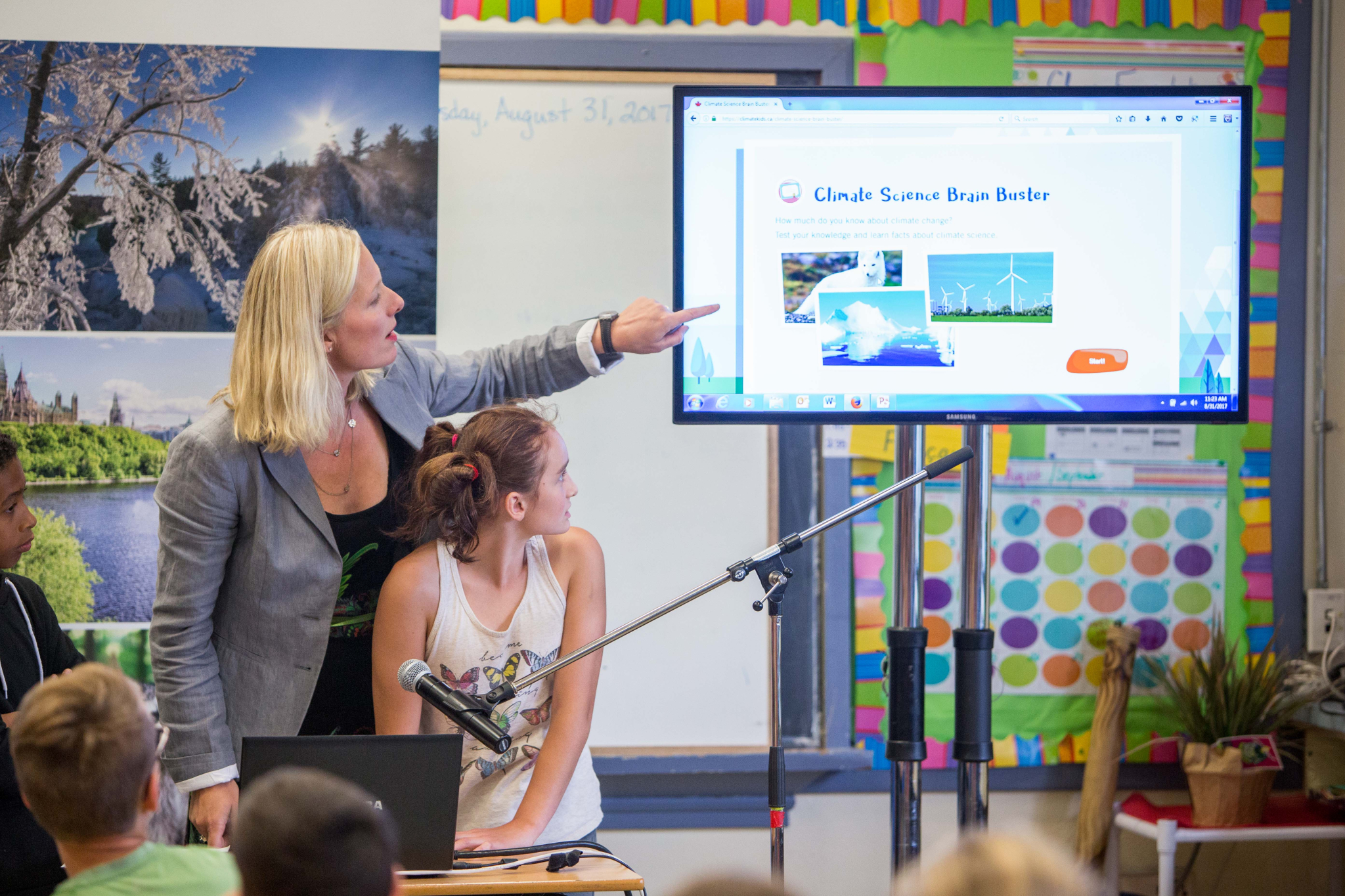 Environment and Climate Change Minister Catherine McKenna speaks to children about climate change at a school in Gatineau, Que. on Aug. 31, 2017. File photo by Alex Tétreault
Previous story
Next story

The comments by the Canadian minister appear to contradict Prime Minister Justin Trudeau's arguments against talking about climate change during catastrophes.

McKenna's statements also come on the heels of some equally fascinating remarks by her American counterpart Scott Pruitt, who told CNN in an interview last week that it was "insensitive" to be talking about climate change after Hurricane Irma.

"Here's the issue," the administrator of the Environmental Protection Agency told the U.S. news agency. "To have any kind of focus on the cause and effect of the storm; versus helping people, or actually facing the effect of the storm, is misplaced...

"All I'm saying to you is, to use time and effort to address it at this point is very, very insensitive to this people in Florida."

But responding to news that a Canadian climate change scientist, Katherine Hayhoe, was taking to the air waves of the CBC to speak about climate change and extreme weather, McKenna delivered what appeared to be a rebuke to Pruitt over his remarks.

"Now is exactly the time to be talking about extreme weather, climate and resilience," McKenna told Hayhoe on Twitter on Monday. "Failing to do so is irresponsible."

Now is exactly the time to talk about extreme weather, climate & resilience. Failing to do so is irresponsible. Thanks @khayhoe. https://t.co/4I5eJd3Rhl

The next day, McKenna shared a newspaper article on Twitter from the Montreal Gazette in which astronaut Chris Hadfield explained the links between extreme weather, hurricanes, forest fires and climate change.

“Hurricanes are driven by warm water, which is why we don’t have them in the North Atlantic. Hurricanes have a randomness to them and go in cycles. But they are definitely the product of a certain recipe. When you increase the temperature of the Atlantic, then its behaviour is going to more mimic the history of the warm Caribbean waters," Hadfield told the Montreal Gazette.

“But there are way stronger telltales of the world climate changing than the frequency and severity of hurricanes. There are the fires happening in the West. It doesn’t take a genius to extrapolate the human impact of climate change. This isn’t any sort of political talk I’m giving, but there are a lot of really important issues that we need to address. I think there is a natural human tendency to blame someone else or to expect someone else to deal with it. The actual responsibility is with the individual.”

In this article @Cmdr_Hadfield drives home the connection between hurricanes and climate change. Read: https://t.co/pp17apQJ0F

It's extraordinary to have a minister of the Crown in Canada like McKenna who actively seeks all opportunities to speak about climate change and engage with Canadians and the rest of the world on this life-threatening crisis.

But strangely, there is another minister who sits around the federal cabinet table who has expressed some opposing views about what not to say in these types of situations, warning, in one instance, that references to climate change after a disaster were "neither helpful, nor accurate."

That minister just happens to be the prime minister.

In May 2016, Prime Minister Justin Trudeau had said that Green Party leader Elizabeth May's suggestion that the Fort McMurray wildfires that year were "very related to the global climate crisis" was neither helpful, nor accurate.

"It’s well known that one of the consequences of climate change will be a greater prevalence of extreme weather events around the planet," Trudeau told reporters at a news conference that followed the start of this Alberta disaster.

"However, any time we try to make a political argument on one particular disaster, I think it’s a bit of shortcut that can sometimes not have the desired outcome. There have always been fires. There have always been floods. Pointing at any one incident and saying: ‘This is because of that,’ is neither helpful, nor entirely accurate. We need to separate a pattern over time from any one event. What we are focused on right now on is giving the people of Fort McMurray and the rest of Alberta the kind of support that they need right now and in the months and indeed the years to come.”

So which minister actually speaks for the Canadian government? And is Catherine McKenna facing some resistance around the cabinet table?

Catherine McKenna and the Climate Kids

By Alex Tétreault | Analysis, Energy, Politics | September 1st 2017
Reports from the Race to a Safer World

Neither the PM nor the

Neither the PM nor the Environment Minister is wrong. We can not necessarily say that any event (fire, hurricane, flood, etc.) was caused by climate change, but there is clear evidence that these events are made much worse by this phenomenon. Let's not present this as a disagreement within the Government. Let's all realize that, yes, we need to talk about climate change and DO SOMETHING about it!

Canada's Second Biennial Report submission to the UNFCCC (April 2016), section 5.1 (footnote):
"Canada has indicated that its accounting for managed forests towards its emissions reductions target will exclude the impacts of natural disturbances because these impacts are non-anthropogenic."
In this statement, the Trudeau administration is denying the impacts of a warming climate on "natural disturbances" (e.g. wildfires, insect infestations such as the mountain pine beetle, the melting of permafrost, drought, etc.) in Canada's forests. This is in contradiction with all the research showing the actual and future impacts of climate change on Canada's forests and its ecosystems.
Climate change is expected to have a profound impact on the carbon balance of Canada's forests: "For the past century, Canada's managed forests have been a significant carbon sink, steadily adding carbon to that already stored. In recent decades, however, the situation has reversed in some years: Canada's forests have become carbon sources, releasing more carbon in the atmosphere than they accumulating in any given year. Several factors have contributed to this shift. The annual total area burned by wildland fires has increased substantially. Unprecedented insect outbreaks have occurred.
Scientists at Natural Resources Canada's Canadian Forest Service predict that the forest area annually burned in Canada is likely to double or more by the end of the century, resulting in large emissions of carbon. More frequent and longer droughts are expected to contribute to this increase. Similarly, increases in the area and intensity of insect outbreaks are expected to cause carbon losses.
Northern regions of Canada are expected to warm faster than more southerly areas, resulting in the melting of permafrost; this may release methane from frozen soils and initiate decomposition of previously frozen organic carbon."
(source: www.nrcan.gc.ca./forests/climate-change/forest-carbon/13085)
What the Canadian government can do about it? First, it has to recognize the science. Second, it has to inform the public. Third, it has to act on it and stop spreading misinformation.

I have to agree with Minister

I have to agree with Minister McKenna. Now is the time to speak to these issues. Especially in light of the current American administration's Head in the Sand approach. The only thing that will wake people up is when it hits home.