Canada's climate minister launches website for kids in a classroom 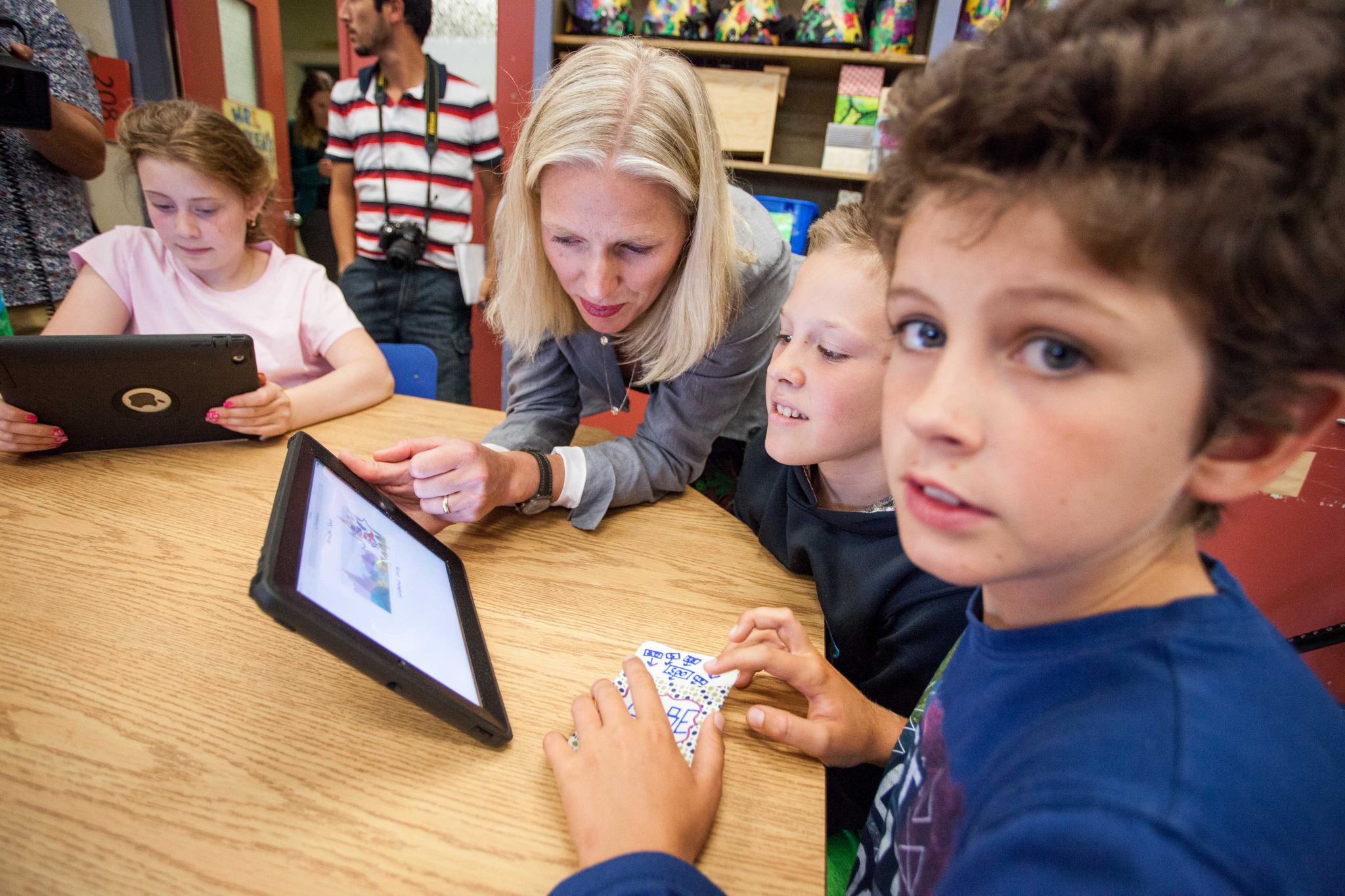 Environment and Climate Change Minister Catherine McKenna navigates on the new ClimateKids.ca site on an iPad with students in Gatineau, Que. on Aug. 31, 2017. From left to right: Pénélope Krause, Connor Greene and Gabriel Lavoie. Photo by Alex Tétreault
Previous story
Next story

What could be better than starting the elementary school year with a high-profile guest for a chat about climate change?

Especially if your school happens to be named after a famous prime minister whose son is now leading the government in the House of Commons.

The students at Pierre Elliott Trudeau Elementary School, an anglophone school in Gatineau, across the river from Ottawa, just won a "green back to school" contest for introducing a number of measures to improve their environmental practices.

Environment and Climate Change Minister Catherine McKenna rewarded them by launching her government's new website for kids in their classroom. "Climate Kids" is a project designed to get them to learn and talk about climate change and bring those conversations back home to their parents and grandparents.

"I'm really proud of you guys," McKenna told the classroom, "because you know what? Is climate change real?"

There were about two dozen students in the room. Most of them said "yes." Although I could have sworn I heard at least one of them say "no." Perhaps just a joker. Watch the video below and decide for yourself.

Without missing a beat, McKenna carried on.

"Are you guys going to help me help the planet?"

"Are you going to get your parents to do that?"

"Get your grandparents to do that?"

"Because it's about your future."

It's no secret that up until 2015, politicians from the federal government spent a long and dark decade when it was frowned upon to speak about climate change in Ottawa.

With a similar darkness staunchly set in south of the border these days, the bar is low, very low.

But McKenna deserves credit for reversing that trend. And she was taking another step forward this week.

She unveiled the new climatekids.ca website, designed especially for young people, to help them understand the science of what's happening, and possible solutions.

It was a special treat for the classroom, getting rare access to a federal cabinet minister in a carefully managed event. The day also included visits from some rare animals that would not normally be expected in the classroom.

For example, there was young Finnigan who flew in for a visit.

Finnigan's handler told the kids that his feathers were puffy and sticking up because he was happy, but I suspect he might have been one skeptical bald eagle.

No, I don't think Finnigan is a climate denier, but he may have some doubts about all of the promises he hears from politicians who say they want to fight climate change.

The website itself was similar in content to McKenna’s interaction with the kids, designed to be light with basic information about climate change, along with some games, such as a “brain buster” questionnaire, a climate hero creator and a section outlining the individual actions that people can take to address climate change or reduce their carbon footprint.

While the website itself is visually appealing, especially for kids, it is limited in scope and in information, limited to the very basics of climate change, the questionnaire, and a page where users can create their own climate "hero".

The section meant to teach kids about what they can do is also focused on individual and household level actions that people can take to mitigate climate change, such as composting, turning off the lights, and so on.

While individual actions are important, data is increasingly showing that micro-level actions are not nearly enough to properly mitigate climate change.

The questionnaire itself provides answers that can sometimes be questionable as well. For example, there's one question the claims that biofuel farming can help address climate change. Studies tend to show that farming some crops can be as equally intensive in CO2 as they are meant to save, and have detrimental effects on the land itself.

The announcement also lacked any information about joint action taken with provincial governments regarding the website.

If the website is meant as a tool to teach kids, and education is generally the purview of provincial government, it is worth asking the how meaningful the website can be if it is a purely federal initiative without provincial involvement.

Some indicators would also point towards kids being already more informed beyond the scope of the website, even at its target ages of 8 to 15.

Even Crimson, the red tegu from South America, was sticking his tongue out at the whole idea.

Better than the USA?

Cynicism aside, I give the government credit for at least talking about climate change and officially acknowledging what is causing this global crisis.

It's especially welcome in North American politics at a time when the Environmental Protection Agency is led by a climate change denier who actively opposes government efforts to crack down on carbon pollution and their climate-warming effects.

Yet, on the American side and its own grim political landscape, NASA is still many steps ahead with their own version of a kids site to discuss climate change at climatekids.nasa.gov.

Even with an administration so bent on denying climate change, NASA’s website for kids is chalk full of useful information, games and other seemingly more engaging information.

With the limited information and entertainment value from the Canadian website, without apparent educational partnerships with the provinces, and with the same provincial governments seemingly ahead of the federal government’s attempt at climate change education, how useful will this website be?

The federal government certainly had good intentions, but their execution appeared to be shortsighted and inefficient, quickly put together instead of having a well built and useful tool. I'd say it's more window-dressing than content.

There was very limited mention of fossil fuel consumption, and no mention of oil production at all, touchy topics and the main criticism for this government’s climate action, or lack thereof. Particularly, after it approved some major pipeline projects that appear to run counter to the idea of a transition away from a fossil fuel-based economy.

Climate resilience is also glossed over with a mere mention of building sewers to mitigate the effects, leading the whole site to lack in delivering an impactful sense of urgency for the next generation.

But McKenna has sworn to protect the environment, reminding the classroom of this fact as she made a "pinky promise" with a student, Navy Slocumbe, and invited others to do the same.

"It's a promise. You can't break a promise," McKenna told the kids.

Successive Liberal and Conservative governments in Ottawa have made a lot of promises to reduce Canada's greenhouse gas emissions since the 1990s. But none of them have ever delivered or even come close to meeting their targets.

"Pinky Swears have become the new binding GHG targets," tweeted David McLaughlin, an ex-chief of staff to former prime minister Brian Mulroney and former chief executive of the defunct National Round Table on the Environment and the Economy.

The federal Liberal government of Prime Minister Justin Trudeau has taken a first step to reversing this trend of broken promises by bringing together the provinces and territories on a national plan to tackle climate change. And his main opponent, Saskatchewan Premier Brad Wall, is headed out the door.

And while McKenna's website announcement was not, after all, about yet another consultation, it still left a lot to be desired, resulting mostly in another photo op with kids and animals, and with a hefty dose of irony.

“It’s not just talking about climate change, because you can talk and talk and talk," referring to the youth in the room as action kids.

Hopefully, the irony was not lost on the audience, they are smart kids.

"I like winning." McKenna challenges Bay Street to up its climate game

No Energy East, no Eastern