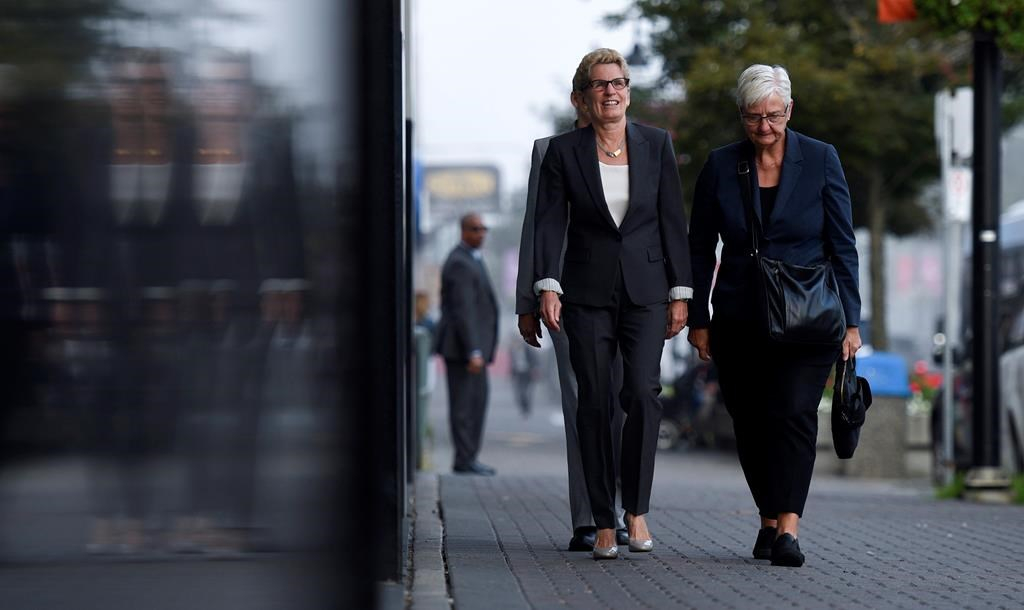 Ontario Premier Kathleen Wynne (left) arrives to appear as a witness in the Election Act bribery trial in Sudbury, Ont. on Wed. Sept. 13, 2017. Photo by The Canadian Press/Sean Kilpatrick
Previous story
Next story

Ontario Premier Kathleen Wynne is testifying in court today that she didn't think a man who wanted to run for the Liberals in a 2015 Sudbury byelection was the best candidate since he had just lost in the recent general election.

The premier is a witness in the trial of Pat Sorbara, her former deputy chief of staff and Liberal campaign director, and Gerry Lougheed, a local Liberal organizer, who are charged with bribery under the Election Act and both have pleaded not guilty.

They're accused of offering would-be candidate Andrew Olivier a job or appointment to get him to step aside for Wynne's preferred candidate in the byelection — Glenn Thibeault, who is now the energy minister.

Wynne herself is not facing charges and today her lawyers sent Progressive Conservative Leader Patrick Brown a letter demanding he retract comments they say suggest the premier is standing trial.

Wynne is testifying that she thought the Liberals should have held onto the Sudbury riding in the 2014 election, given that they had held it for nearly two decades at that point. She says that led her to believe that Olivier was not as strong a candidate as she had thought.

"In an election when we had won a majority and we had won ridings that Liberals had not held in some cases for 70-plus years it seemed a question as to why we wouldn't have held a riding that we had held for so long," Wynne testified.

The premier said she heard that Thibeault, then the NDP MP for Sudbury, was interested in running for the provincial Liberals not long after the seat became available, when the New Democrat member of the provincial legislature resigned five months after the general election.

"I thought it was an intriguing idea that someone who was an elected representative as a federal NDP member would consider running for the Liberals," Wynne testified. "It was an intriguing notion, but I had no idea how real it was."

Lougheed had a "strong relationship" with Thibeault, Wynne testified, so she thought he would be "the right person on the ground to do that outreach."

Sorbara is also facing a second charge, in relation to an allegation she arranged for paid jobs on the byelection campaign for two of Thibeault's constituency staff, at his request.

Thibeault has previously denied he sought anything that would be seen as a bribe in exchange for running and is not charged with any offences.