By Clothilde Goujard | News, Energy, Politics | September 15th 2017
#713 of 2037 articles from the Special Report: Reports from the Race to a Safer World 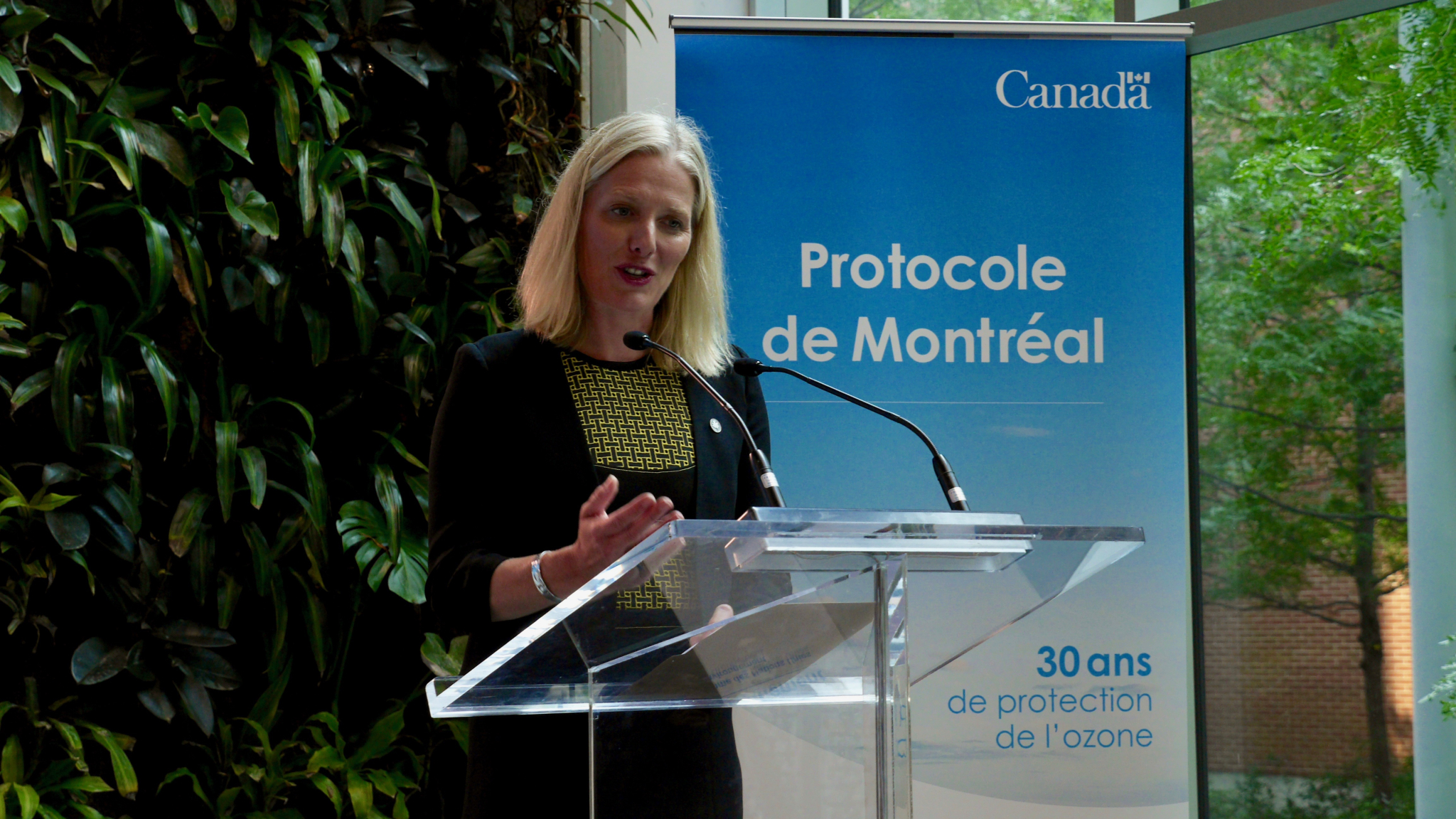 Environment Minister Catherine McKenna addresses a crowd at the 30th anniversary of the Montreal Protocol on Sept. 15, 2017 in Montreal. Photo by Clothilde Goujard
Previous story
Next story

Nearly halfway into the Trudeau government's mandate, Environment and Climate Change Minister Catherine McKenna said her department is still exploring how to address budget cuts imposed by the Harper government to ozone monitoring and science.

At an event celebrating the 30th anniversary of the Montreal Protocol — an international treaty to protect the ozone layer — McKenna said monitoring is a top priority for the government. But she declined to commit to providing new funding to keep critical Canadian ozone-monitoring operations open.

“Clearly, monitoring the ozone is a top priority for us and we do things based on science and this has been the top priority," she told National Observer. "There’s different ways to do this and we’re just looking at our options but clearly, getting the best science we can is critical."

McKenna was asked about the adequacy of ozone monitoring in Canada and whether the government had plans to reopen the ozone-monitoring station in Egbert, Ont. — one of two facilities shuttered under the previous Harper government that scientists would like to see restored. The other is in Bratt's Lake, Sask.

Despite criticism from the Liberals at that time, neither station has been reopened by their government.

McKenna said her department is evaluating whether there are enough ozone monitoring stations in the country at the moment to see how they can “improve and do more.” She declined to comment on an internal report filed by Environment Canada scientist David Tarasick that highlighted the significance of keeping the Egbert station open.

McKenna commented after the day's celebration and out of earshot from the international dignitaries who attended, among them the European Commissioner for Climate Action and Energy, Miguel Arias Cañete; Executive Secretary of the United Nations Environment Programme's Ozone Secretariat, Tina Birmpili; and Chinese Special Representative for Climate Change Affairs, Xie Zhenhua.

Petition launched to save Arctic station

Those dignitaries helped Environment Canada celebrate 30 years of the Montreal Protocol, whose implementation has helped reduce the use of ozone-depleting chemicals in refrigeration, air conditionals and spray cans, and has helped prevent up two million cases of skin cancer and eye cataracts globally, according to Birmpili. It has also helped slash the equivalent of over 135 billion tonnes of climate-polluting greenhouse gas emissions.

Less than three hours after the event, Evidence for Democracy (E4D) launched an online petition to save one of Canada's high Arctic research stations — the Polar Environment Atmospheric Research Laboratory (PEARL). PEARL will close at the end of this year because to date, the Trudeau government has not renewed its funding. E4D says PEARL, one of the few such research stations in the world, needs $1.5 million a year.

"From its scientifically strategic location in Canada’s high arctic, PEARL is able to investigate crucial environmental issues like ozone depletion, airborne spread of pollutants and monitor high Arctic climate changes," says E4D. "...Given the Government’s commitment to addressing climate change, investing in climate and atmospheric science should be at the forefront of funding priorities."

The petition comes amid heavy criticism from scientists that the federal government has not restored much of its predecessor's cuts to climate science, including the Climate Change and Atmospheric program, which supports seven research projects across the country, including PEARL.

"The funding was actually expected to be renewed in the 2017 budget so it’s been quite a few months now where the future for PEARL has been uncertain and even at this point, the scientists there are already starting their shut down procedures, people are already looking for new jobs, actually figuring out how to begin closing the facility," said E4D's executive director Katie Gibbs.

"So, new funding is really required urgently in order for there not be be disruption in the data collection that happens at PEARL. And scientists have been speaking out about this, the potential closure at PEARL for many months now so it shouldn’t be a new issue on the radar."

Gibbs added that the government hasn't demonstrated that any emerging research can replace the unique capabilities that were offered by PEARL.

E4D, a non-profit group that promotes evidence-based decision-making, is also encouraging Ottawa to invest more heavily in long-term monitoring of the ozone layer in the upper atmosphere and the smog-inducing ozone near the Earth's surface.

“It is a top priority for me having the right science, looking at where do we need monitoring, what more monitoring can we do,” McKenna said.

Regarding the funding of PEARL, she said no funding decision has been taken yet.

“We need to have a coordinated approach, I think that’s extraordinarily important and once again we need to just look at what’s going on and what is the path forward," she explained.

Minister McKenna and her counterparts called the Montreal Protocol a “success story,” signed by 197 countries in September 1987. It was the first treaty in the history of the United Nations to achieve universal ratification. Global ozone conditions have improved in the world and in Canada, since the treaty came into force.

However, the government officials insisted on the need to keep working toward more ambitious goals.

“We’ve always had hurricanes, we’ve always had forest fires, but let's be very clear that they are more extreme because of climate change and we don’t have time to sit around and doubt the science,” McKenna told the crowd.

“We know that we need good science. We need to understand where we’re going and what we need to do to keep temperatures well below two degrees.”

By Carl Meyer | News, Energy, Politics | August 24th 2017
Reports from the Race to a Safer World

Trudeau, McKenna and Co. should be ashamed of the their hypocrisy on environmental monitoring. How does the public translate "considering our options"? They translate that statement of belated reluctance as "don't believe everything you hear during electoral campaigns", or "idealogically we're closer to Harper than we are to Paris", or " We musn't upset Mr. Trump by acting on our words", or - - -. Personally, I'm ashamed to be Canadian while watching the continuation of Harper's policies by a Trudeau government. A pox on them all!

The government should have

The government should have presented us with a vision of the future and a path to get us there. That it has not done so is evidence that it is controlled by the fossil fuel industry.