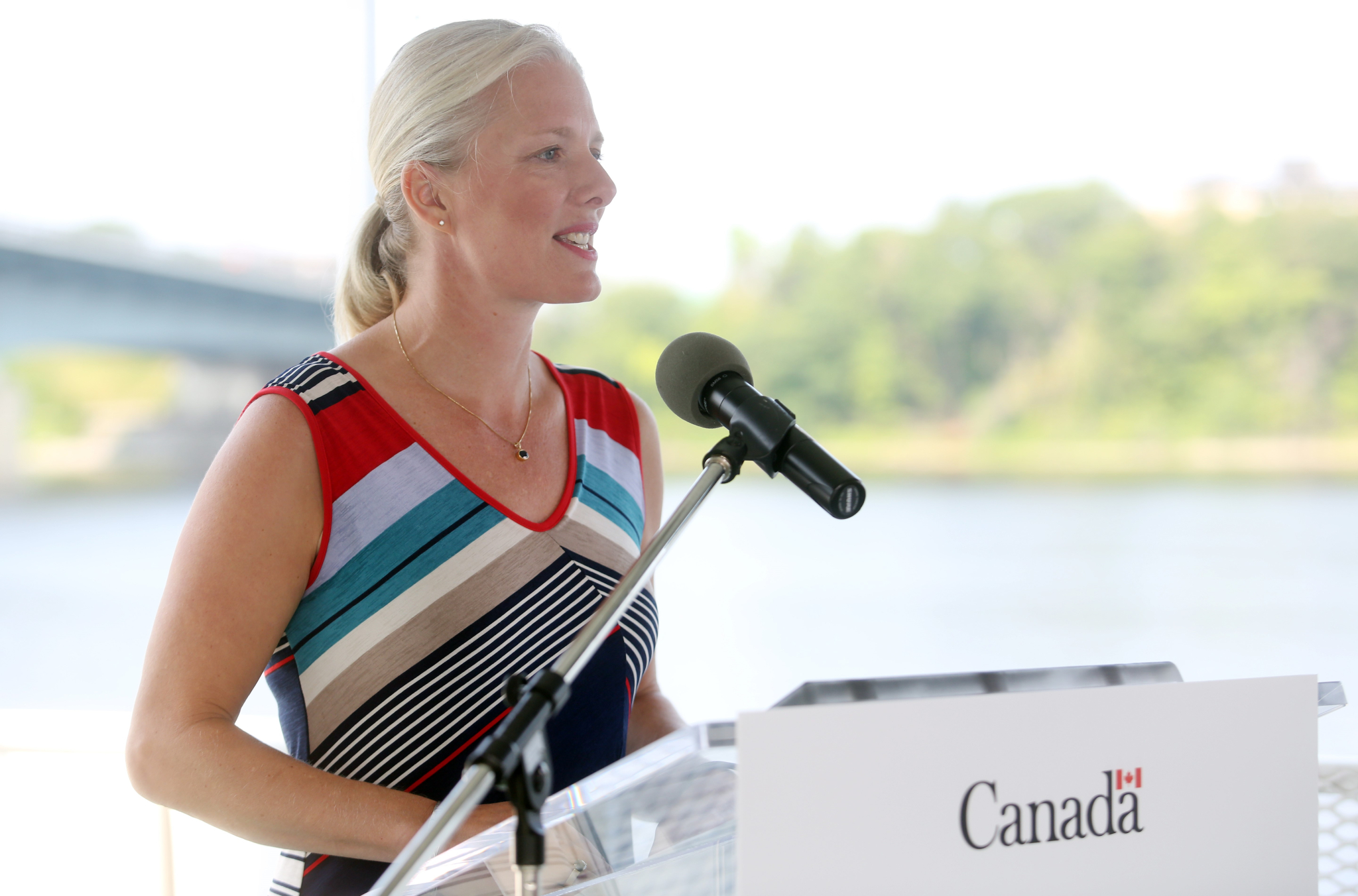 Environment Minister Catherine McKenna speaks during a boat ride on the Ottawa River on Aug. 21, 2017 to visually highlight the heritage designation now conferred upon the entire length of the river. Photo by Andrew Meade
Previous story
Next story

David Tarasick became a poster boy of government muzzling in the Harper era.

In 2011, he was blocked by the Harper government from talking to journalists about his co-discovery of the Arctic ozone hole.

He has spent over 30 years in the department, written over 75 scientific papers, represented Canada at science summits abroad and is a co-inventor of the famous UV Index.

Yet Tarasick's 2015 advice to his superiors that Canada isn't meeting scientific objectives when it comes to emerging climate research is still being "considered" two years later by the Liberal government of Prime Minister Justin Trudeau.

"I can write something and jump up and down and say, 'I want 1,000 more ozonesonde stations,' and they'll say, 'Well that's fine David,'" he said in an interview with National Observer.

"We provide expert advice; it's not our role to make decisions, and it's certainly not our role to second-guess them," Tarasick said. "The government has other considerations than just the beauty of our ozone data."

'There is no other comparable site'

The senior scientist in Environment and Climate Change Canada has spent his career studying ozone, a pursuit with life-and-death consequences.

In the Earth's atmosphere, the ozone layer acts as a filter, absorbing ultraviolet (UV) radiation, which is linked to health problems like skin cancer, damage to the immune system and the eyes leading to cataracts and disease, premature skin aging and abnormal plant growth.

Closer to the surface, ozone is a main component in smog, which leads to respiratory symptoms like asthma; tens of thousands of deaths a year are due to air pollution, says Canada's medical association.

Ozone-depleting substances are also potent greenhouse gases, leading to destructive climate change. A new scientific concern is how ozone is affected by climate change's impacts like rising temperatures and more severe wildfires, and how it's being transported in and out of Canada from around the world.

To study that, Tarasick and his colleagues say they would need to re-start at least one ozonesonde launch site at Egbert, Ont. that was halted in 2011 during the Harper government. "It was not my opinion that the sites were redundant, by any means," he said.

In 2015, they wrote up an internal report, obtained by National Observer, recommending three options for how to tackle 11 scientific objectives like monitoring the ozone layer, ozone gas pollution, satellite data validation and other issues.

"Tropospheric ozone is currently the more important issue by far, scientifically, economically and with respect to human health. However...the northern sites have longer records, which render them more valuable for trend studies."

The Egbert site, the report said, was "particularly important because it is the only continental site in eastern North America, and shows quite different behaviour from marine sites."

The report makes clear that "there is no other comparable site either in Canada or the U.S."

They might have thought that the Liberal government would be receptive. After all, Trudeau himself led the charge against the Conservatives in 2011 when the Egbert launch site and another one in Bratt’s Lake, Sask. were closed on their watch.

Trudeau even hinted that the Tories may not possess a complete understanding of what ozone actually is. He campaigned on restoring evidence-based decision-making in government.

Yet his government has so far not re-opened either launch site. Instead, Environment Minister Catherine McKenna's office says Canada's remaining sites are "sufficient" for "robust" monitoring of stratospheric ozone.

It says the government “continues to operate one of the largest stratospheric ozone monitoring programs” and that the program meets Canada's "operational requirements.”

She said the scientific recommendations were "highly valued" and that the department was reviewing its monitoring networks "as part of a broader air quality monitoring review."

Any decisions, she said, "will consider all recommendations made by our scientists, including those proposed in the referenced report."

"This scientific analysis is being considered with other determining factors to continue to deliver an air quality monitoring network that meets the needs of our clients and Canadians," added Des Rosiers.

"As noted in the report, the current network is sufficient to meet our stratospheric ozone monitoring obligations and also provides tropospheric measurements at eight sites, including two in southern Canada."

For Tarasick, it's another example of how, even as a veteran government scientist, it's ultimately up to his political masters to decide when and where to take action.

"What I can't do is comment on government policy. I make recommendations. It's up to the government to decide what to do with that," he said.

By all accounts, Canada is still a formidable contributor to the global scientific community that tracks ozone.

Canada is even making breakthroughs investigating ozone’s impact on the Earth and its atmosphere. Departmental scientists recently discovered that forests, with their canopy of leaves and their wind resistance, significantly decrease ozone production.

Canada's international participation in ozone research was highlighted by the minister's office as an example of how Canada meets obligations.

"Most recently Canada presented its national report" at an international meeting of ozone research managers in Geneva, Switzerland in March, Des Rosiers noted.

“The objective of these meetings is to review ongoing national and international research and monitoring programs of the ozone layer to ensure proper co-ordination of these programs and to identify gaps that need to be addressed,” she said.

"No negative feedback on the Canadian program was received during the recent meeting of March 2017.”

However, the meeting did result in one recommendation suggesting that Canada and other countries could improve monitoring. It said they could do this by submitting more data of UV radiation on a timely basis. This type of data is collected using a type of monitoring device invented by Canadians, called Brewer spectrophotometers.

“Ensuring the quality of this data is imperative, as their use is directly related to effects of UV radiation on human health and ecosystems,” reads the recommendation.

Scientists say Canada and other countries have been falling behind in providing consistent and regular UV radiation data.

Tarasick said this is a common complaint from the meteorological association and the UN body that oversee the meeting, but he explained that scientists are hesitant to submit data before ensuring that it is correct.

Management changes were introduced under the Harper government that moved the World Ozone and UV Data Centre, housed by Canada, out of the environment department’s science and technology branch and into the meteorological service. The Liberals have left that decision in place.

​—With files from Mike De Souza

Is it possible that the

Is it possible that the Trudeau promises were sincere BUT once groups of people (a political party) assume office, they are met with the harsh realities that they are hamstrung (to use an old adage), by the regulatory capture in place and the lobbyists for industry and corporation. Only then do they come face to face with the limitations to government power. This is why I believe that we need to get big money out of politics and change the rules on lobbying the government - not to mention the revolving door between corporate and government that provides such people as Nigel Wright a seat at the head of the table.